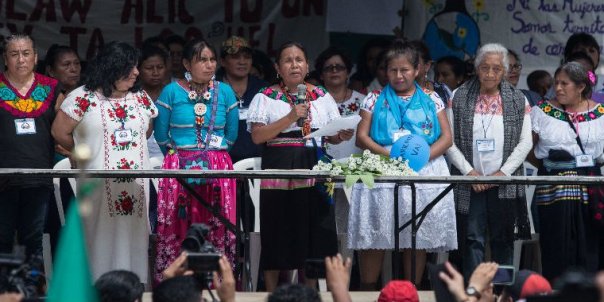 The candidate nominated by the Zapatista National Liberation Army (EZLN) and the National Indigenous Congress (CNI) to the presidency of the Republic, María de Jesús Patricio Martínez (Marichuy), today denounced “the simulation” and failings of the collection of signatures through the electronic system and the slowness with which the application operates on some devices.

Within the framework of her penultimate day of touring the five EZLN caracoles, the candidate was in Palenque today, where she headed a meeting before thousands of men and women in the central plaza.

There, the candidate to an official independent candidacy exposed the farce that the mechanism created in the National Electoral Institute (INE, its initials in Spanish) has so far turned out to be.

After her registration at that organism, among the more than 40 candidates, she will have to collect 866,593 signatures in at least 17 states of the country in the next 120 days. If she achieves that, she will be able to access public financing and initiate her campaign on March 30, 2018.

Last October 15 the indigenous candidate received her proof that accredits her as a candidate to the presidency of the Republic and on Monday, October 16 she started collecting citizen support for registering Indigenous Government Council’s proposal.

After completing that step, she created jointly with the CNI a support network in the 32 Mexican states, with which in just two days they registered 1,480 volunteers and foresee that that next week 1,500 more will be added for collecting the needed signatures.

However, Marichuy denounced today that from the beginning she has seen that the digital electronic system is not made for the people of Mexico, “for the poor of this country, but rather for the rich, demanding (that we use) technologies for the collection of signatures that in many of our communities we don’t even know.”

The presidential candidate assured that: “the INE made a list of telephone makes and models so that you must have at a minimum an Android 5.0 operating system or higher and so many hours to begin with the download of the applications in the devices, we find that the list is not true; we find brands that are not included in the list and of those that are included they don’t all work. The download is tedious and can take hours.”

Another obstacle, she explained, is that the “mid-range” telephones indicated by the INE cost more than five thousand pesos and those with “high range,” cost more than 12,000 pesos and, even worse, among those several of the brands and models selected don’t work either.

And she went further: “In order that the photograph to be accepted it must be taken at noon, because morning and afternoon light is insufficient, unless there is a special light that illuminates it sufficiently. This means that, if we reduce the days to hours, that we have one third of the 120 days provided by law.”

Then, she remembered that the INE said that a registry by this means would take them 4.30 minutes and, according to its calculations, they would reach the 120 days that electoral law sets for collecting the more than 866,500 required signatures.

However, reality revealed that one registration could last up to 16 hours because of the bad technical quality with which the application is designed.

“Many signatures that we collected were not even able to upload in many hours because of because the places through which we were passing between Altamirano, Ocosingo and Palenque, where they usually have a good Internet signal, didn’t even have a telephone signal. And those signatures that they have achieved sending don’t receive a notice of receipt until 24 hours after having been sent to the INE,” she denounced from the stage.

With these “classist, racist and excluding measures,” she said, you realize “that this electoral system is no made for those peoples below that govern ourselves and that the laws and institutions of the State are made for those above, for the capitalists and their corrupt political class, resulting in a big simulation.”

Nevertheless, she commented that “as is the custom in our peoples, surrendering, selling out or giving up is not an option and we will redouble efforts to collect the citizen support required to figure as an independent candidate to the presidency of the Republic on the 2018 electoral ballot.”

Even with that imposed obstacle, she emphasized, they will continue working to expand and strengthen the organizational structure throughout the country until making “the earth tremble at its core and it permit the survival of the Native peoples and the reconstruction of a Mexico that has been intentionally torn to pieces by those who hold power.”

Later, the activist repeated that the indigenous peoples would continue struggling so that their voice is heard in the countryside and the city.

Comandanta Amada spoke at the event in the name of the Indigenous Revolutionary Clandestine Committee-General Command of the EZLN from Caracol V “That speaks for everyone,” who coincided with Marichuy upon pointing out that: “it’s time that the people organize, that they fight, rebel and resist wherever we may be in our different places and geographies, because the capitalists are globalizing the exploitation and destruction of humanity all over the world.”

The leader considered that the indigenous peoples are also able to globalize their struggle “to make rebellion throughout the world, because we have a single common enemy, which is the neoliberal capitalist system.”

A masked indigenous woman identified as Alejandra, referred to the creation of the five Caracoles and their Good Government Juntas, from which began a form of self-government 14 years ago in each one of them.

“The origin of our self-government is because of the non-fulfillment of the accords signed in San Andrés Larráinzar between the federal government and the EZLN, representing the Native peoples of our country of Mexico,” she assured.

Within that system, she explained, the peoples have confidence in their self-government because their representatives -men and women- come from the same towns, where they are names by means of assemblies of agreement by uses and customs, and that don’t require money for publicity.

Comandatas Valentina, Jackeline and other indigenous women also spoke at the event.

Differently than the other Caracoles that Marichuy has visited, there were no uniformed Zapatista milicianos in the central plaza of Palenque, although there was a military discipline of men dressed as civilians and masked, who guarded the spokesperson for the Indigenous Government Council created by the EZLN and the CNI.