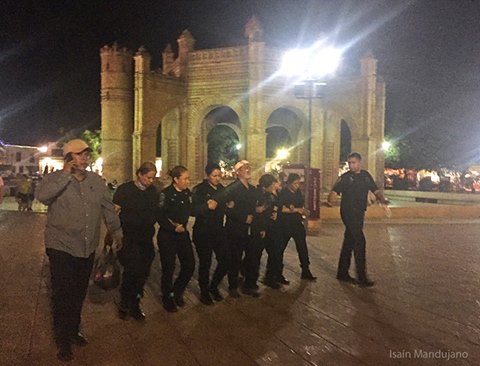 In the early morning hours of this Tuesday, residents of Chiapa de Corzo released the seven federal police that were retained after a clash between demonstrators and police agents, within the context of President Enrique Peña Nieto’s visit to this colonial city. [1]

After the celebration event for International Indigenous Peoples Day, members of the federal forces maintained several clashes with residents, who repudiated the Mexican president’s presence in this location with protests.

At first, hundreds of youth armed with sticks and stones intercepted an AVC bus that was transporting the police, the majority of them women, removed them from that vehicle and took them to the El Calvario neighborhood.

Later, in a second clash, the police exchanged tear gas for sticks and stones that the protesting youths threw. In this incident, the demonstrators retained a member of the federal police and took him away hitting him. Bloodied, the police officer was carried off to join the group of female police that they were holding. These acts occurred between 7 pm and 8:30 pm.

While the young people took control of the central plaza and City Hall, hundreds of state and federal police congregated at the town’s entrance to enter and rescue the police being held.

However, they sent a commission of functionaries headed by the Federal Police Commissioner, Jorge Armando Rodríguez Solorio, who dialogued and negotiated for several hours with the residents that participated in the protest and had hidden the police officers.

It was around one o’clock in the morning when the residents finally agreed to release the federal police officers in exchange for civilians that the police allegedly detained, but the authorities reported that they had not detained a single civilian.

After confirming that no civilians were detained, residents released the siz female police and the one male officer, all of whom came out walking for several blocks, went by the central plaza and headed for a white Suburban that was waiting to get them out of town and to take them for a medical exam.

As soon as they were set free, all the federal and state police agents withdrew from the zone. The withdrawal started around 1:30 am.

At the plaza, the young people set fire to the bus that burned for several hours in front of City Hall. Other official City Hall vehicles were also destroyed.

This is not the first time that residents of Chiapas de Corzo have confronted federal police. On May 25, 2016, they expelled hundreds of federal police from the town that were found staying in a hotel. Local residents threw them out of town because they considered them instruments of repression of the federal government against the teachers’ movement that lasted for more than three months in an occupation in Tuxtla Gutiérrez, in protest against the education reform.

[1] President Peña Nieto used this occasion to deliver a speech about the progress of the Special Economic Zones in Chiapas, Oaxaca and Guerrero and how they will alleviate the social and economic “backlog” (poverty, extreme poverty, lack of education and health care) in indigenous communities.