Construction of new military base in Chiapas advances rapidly 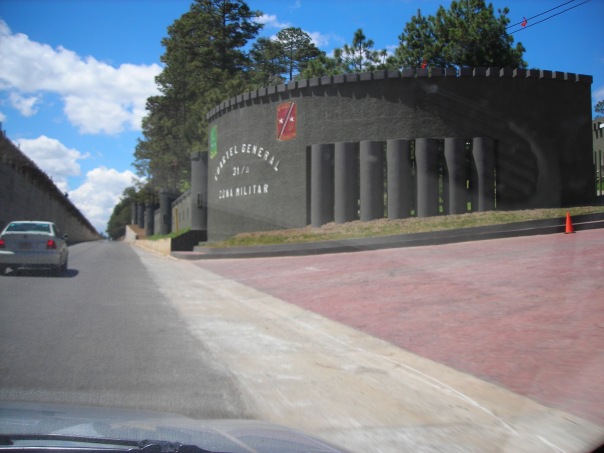 A view of the entrance to Rancho Nuevo Military Base from the highway. It’s located near San Cristóbal de las Casas, Chiapas.

The Mexican Army advances rapidly in the construction of what will be the new military base in the municipality of Chicomuselo, Chiapas, which according to Governor Manuel Velasco Coello will strengthen the security shield in the state’s Sierra Region and on it’s southern border.

“With the new Army barracks that is being constructed in the Sierra of Chiapas we will have a border that is more secure and a better protection of the population in natural contingencies,” said the Governor, who visited the work together with the commander of the VII Military Region, General Luis Alberto Brito Vázquez.

After supervising the construction –close to the borderline with Guatemala–, Velasco maintained that the new base would strengthen the security actions that they impel in the state to guaranty the social wellbeing, governability and integral development.

It is in the interest of both the state government and the Federation to reinforce joint actions in security matters in the 122 municipalities of Chiapas, he added.

Also accompanied by the Comandante of the 39th Military Zone, Víctor Manuel González Pérez, he pointed out that the construction of the new military complex is done under the corresponding environmental regulations.

The new installation, he said, “forms part of the national security strategy that President Enrique Peña Nieto impels, where the goal is to establish the joint labor among the different levels of government for attending to, combating and eradicating any kind of violence, as well as attaining more secure, dignified and prosperous borders for all those that live or travel through Mexican territory.”

Besides, he added, it will permit improving inter-institutional coordination, strengthening projects in security matters focused in the different regions of the state, guarantying social cohesion and offering better opportunities for social and economic development.

That –he emphasized– it will generate an economic spill of eight million pesos per month, direct and indirect jobs, as well as the opening of businesses with local providers, the arrival of service providers, and the improvement of public services in health, education, communications and transportation.

Also on tour with the governor were: Raciel López Salazar, attorney general of the state; Jorge Luis Llaven Abarca, Secretary of Security and Citizen Protection; Juan Carlos Gómez Aranda, Secretary General of Government; José Antonio Figueroa Hernández, municipal president of Chicomuselo, and federal delegates in the state, among others.

← López y Rivas: The time has come
Letter from Kurdish Women to Marichuy →