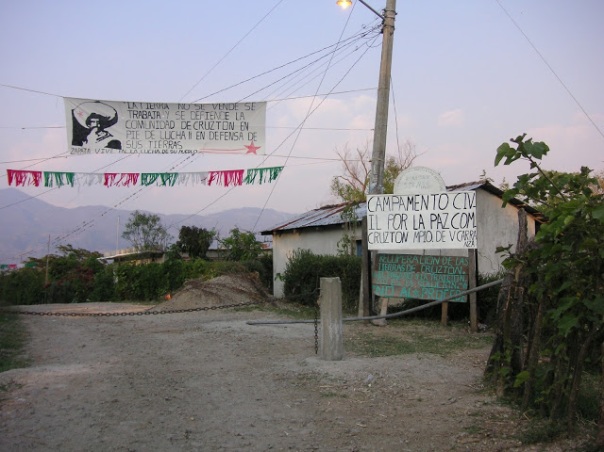 Despite repeated denunciations from Cruztón community, municipality of Venustiano Carranza, on this May 22 violence on the part of “invading groups” from the Nuevo Guadalupe Victoria ejido cost the life of the community defender Rodrigo Guadalupe Huet Gómez. After being ambushed together with 30 of his compañeros, Rodrigo Guadalupe left the place where he was safeguarded from the attack to verify whether the attackers had withdrawn, when he received a bullet impact in the left temple, agonized for an hour due to lack of medical attention and died at approximately 8:00 am, the Fray Bartolomé de las Casas Human Rights Center (Frayba) explained in a denunciation.

It’s appropriate to emphasize that the requested emergency medical services were not able to provide assistance, according to statements from civilian protection agents, because Eleuterio Bautista Aguilar, Municipal Agent of the Guadalupe Victoria ejido, stopped the ambulance coming from Venustiano Carranza, while the civilian protection ambulance coming from Teopisca was intercepted by men with firearms in a shooting position, the Frayba reports.

Cruztón residents have been demanding respect for their territory, especially where the holy field is found, which since 1920 “by right of our ancestors we reclaim and we know that no one can privatize and take away from us, like the group of invaders from Guadalupe Victoria are doing now,” they had denounced.

On March 5, 2013, “an invader group from Guadalupe Victoria, placed banners on 12 small properties (Tombs), in order to soon take possession of them,” the National Indigenous Congress (CNI) members warned. On April 16, 2015, upon seeing no response from the government to the Cruztón denunciations, the invading group took possession of 3 small properties.

Afterwards, on May 8, 2015 the invaders stopped up the pass that leads to Venustiano Carranza, detaining two Cruztón residents that were carrying a sick person for two hours, threatened them with high-caliber weapons and telling them: “that they were going to know who they were,” the adherents to The Sixth related.

On May 10, 2016, when Augusto de la Cruz Pérez went to Guadalupe Victoria to leave his wife at her mother’s house, “he was kidnapped upon his return without having committed any crime,” Cruztón denounced at that time. “The aggressor group from Guadalupe Victoria that kidnapped him was strongly armed with high-caliber weapons; they beat him, hung him for an hour and let him go at 5 o’clock in the morning, but at the same time they threatened him saying: “no one messes with us and if you say who it was it will; get worse for you,” the Cruztón residents reported, who are also members of the Dignified Seed collective (colectivo Semilla Digna).

In its communications, Cruztón urges Manuel Velasco and all his (government) agencies to: “respect our rights to land and territory since this aggressor group’s harassments have continued up to this moment and we hold you responsible for any aggression that may happen,” which then occurred last May 22.

The national and international condemnation response to the crime was not expected; from the CNI Mexico and the Network Against Repression (La Red Contra la Represión) to the collectives and organizations from Italy, France, Germany, Spain and Switzerland, they all agree that: “Guadalupe, the Cruztón Community not only misses him, but we also miss him. His death pushed us to raise our struggle for freedom and justice higher. We will multiply our efforts so that you don’t feel alone because your struggle is the same as our struggle for dignity and humanity,” they emphasize.

“The farewell to the body of our compañero was May 24, 2017 in our community cemetery. We said farewell to his body but his always dignified and rebellious struggle will be with us forever,” his compañer@s asserted from Cruztón.

← The offensive of above, versus the movement below
Emergency in the Chol town of Tila, Chiapas →