Chiapas: Learning between modernity and marginalization

Posted on May 25, 2017 by Chiapas Support Committee 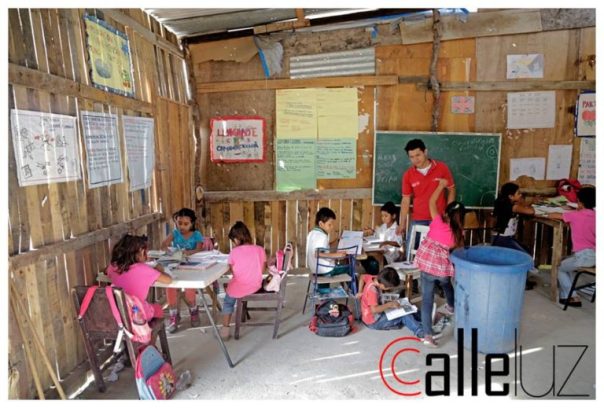 The first challenge to being a teacher has not been easy. Fortune has fallen upon César and Pablo of feeling in their own flesh the real situation that thousands of schools in Chiapas are going through. They have to give classes in the midst of dust and inside of a classroom constructed of a wood base, galvanized tin roofs and pieces of plastic, practically in marginalized conditions.

One might think that they give classes in a school located in the jungle or in the state’s Sierra (mountains), but we’re talking about a multi-grade classroom located in the Unión Antorchista District, of Chiapa de Corzo municipality, a scare three kilometers from where a modern commercial complex is built that gives a vanguard touch to the capital of Chiapas.

That reduced space that they call the “Benito Juárez” Elementary School contrasts with the modernity that is seen at a distance; from that place one can see the largest tower in Chiapas with its glittering windows; one can also see the subdivisions that have broken the visual equilibrium between the Rio Grande of Chiapas and its hills.

In that space, where seventeen boys and girls congregate daily, the color ocher and the smell of ocote wood dominate el color; the children are in search of knowledge without caring if they do it in overwhelming heat or in the middle of the dust.

The modernity of that improvised classroom is still limited to a pile of books that the father of each family brought to form a small library and to raw drawings of superheroes that simulate murals on the walls.

The children that show their friendship in each smile don’t know what a multimedia classroom is, much less an Internet connection to virtual libraries like the Education Reform proposes.

Everyone learns under the old teacher-student scheme, but now with the variant that the children have to play an almost self-taught role in order to be able to learn things better and share them with their peers.

“It’s learning based on communication and dialogue. It’s a different way since now the students learn on their own; before the teacher was standing up in front and teaching, now we interact and they can become tutors and give classes among themselves,” says Pablo, a teacher in charge of attending to a group of children.

Ironically, the classroom is located just at the side of a light post, but the classroom doesn’t have electricity; outside where the atrium is supposed to be, the almost desert-like scenario gives a dramatic atmosphere to that space.

Suddenly, a gust of wind fills the faces with earth and bothers the eyes with the tiny stones that it achieves raising, but it doesn’t matter. Nothing stops them from playing; soccer is the most fun for them.

The littlest ones hug and climb on each other to walk on the imaginary edge of the atrium; they know that the playground ends there because then comes the thicket that has been bent over by the inclement sun.

Others prefer to take advantage of the time to finish homework or to review what they learned. The best bench table for a fifth year student is a worn out chair. He places a book on the desk and leaves others that he will use later on the ground. In a cramped position he begins to review the homework and has placed a backpack as a pad so that the ground doesn’t hurt his knees.

“If we need to go to the bathroom then we ask the teacher for permission and we leave running to that little room that is there, the one that you see wrapped in nylon,” another student says, upon pointing out a small box constructed of wood and plastic.

In the Benito Juárez School with key 07KPR4157A the hero is the teacher, who given the lack of technological instruments has to draw upon his creativity and unimaginable tools to be able to comply with the study plan.

“It’s not easy, but if we have that love and vocation for teaching we have to invent so that the children learn, It’s a real test being in front of the classroom and for our students to learn the basics,” assures César, who is ready to call his students because recess is over.

César and Pablo are two student teachers from Conafe. This is their first encounter with children to give classes. Both imagined that they would send them to a marginalized community in some distant municipality, but not that they would give their service a few kilometers from the Chiapas capital; there, they also encountered a panorama similar to what hundreds of communities experience.

They are almost sure that they have to go through that experience to verify the reality about the state’s education system. They will spend a year in service to earn a fellowship and continue with their studies en some teachers college or university.

“Here we have to encounter the flavor to which we want to be dedicated. We must go through that to know if our vocation is really to be a teacher,” assures Pablo, who now only lacks a few months to finish his service.

He would like to continue in that school in order to improve the facility little by little; he is fond of his students who constantly bring fritters or other goodies to enjoy together.

César looks for a pen among his things entre to underline some corrections that he found in a sentence that he has dictated to one of his students that is in the third grade together with his other classmates.

For the child, the word exclusion still doesn’t enter his life’s dictionary, it doesn’t matter to him that he shares a group with several younger children.

There, in that humble but solid group, teachers and students spend the days cultivating and discovering new things. While the children learn the basics, the student teachers discover their true vocation, there in the midst of the dust, overwhelming heat and marginalization.

Published in Spanish by Pozol Colectivo