JOINT COMUNICADO OF THE CNI AND THE EZLN IN SOLIDARITY WITH THE INDIGENOUS COMMUNITY OF SANTA MARÍA OSTULA, MICHOACÁN 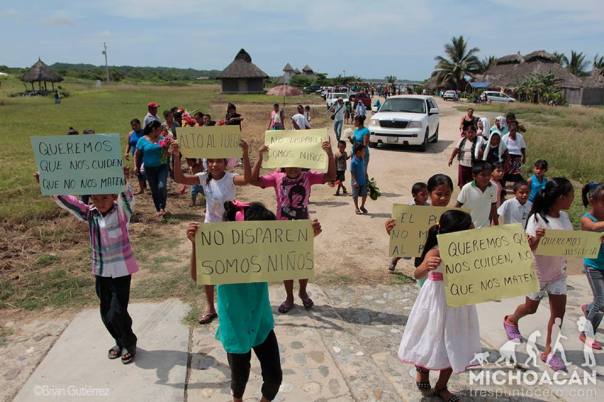 To the Nahua community of de Santa María Ostula, Michoacán:

To the peoples of the world:

To National and International Civil Society:

To the free communications media:

The peoples, nations and tribes that are the National Indigenous Congress and the Zapatista National Liberation Army demonstrate our profound repudiation of the actions that the bad governments and the criminal gangs carry out in unison against the indigenous Nahua community of Santa María Ostula, municipio of Aquila, Michoacán, to try to kill their dignified and historic struggle.

The governments were not only accomplices of the May 25, 2015 attack on Cemeí Verdía, but it also freed the guilty Juan Hernández Ramírez (then Aquila’s municipal president) and José Antioco Calvillo.  It incarcerated Cemeí Verdía with invented charges and murdered the child Hidelberto Reyes García.

The bad governments now seek to arrest Comandante Germán Ramírez, fabricating crimes and guilt to those who fight and defend the land and their families.  Meanwhile, at the same time, members of the Caballeros Templarios (Knights Templar) Cartel regroup and are now re-organized and strongly armed to the east of the municipio of Aquila.

The crime of the comuneros, community police of Ostula and the self- defense groups of the coastal sierra of Michoacán, has been not accepting the death and terror that the bad governments and the organized crime in the region offer as the only option.  On the other hand, with its resistance and rebellion Ostula has not only has taught us the dignity of an organized people, but it has also demonstrated to the world that it’s possible to construct peace and justice in the midst of the destruction in which the capitalists have submerged this country.

We denounce this new attack on the indigenous community of Ostula and we place responsibility for this aggression in the hands of bad governments, Enrique Peña Nieto and Silvano Aureoles, accomplices of the Templario leaders El Tena, El Tuco, Chuy Playas and on Federico González (Lico), who the community has pointed out on numerous occasions as the one responsible for the assassination of 34 comuneros and the disappearance of 6.  We place responsibility on them for the blood that they want to see run in order to protect their capitalist businesses, for protecting instead of looking for and arresting the Templario leaders, for guarantying impunity to the military killers of Hidelberto, and little boy, for seeking at all cost to dispossess communal lands and natural resources, for seeking to kill that hope for this country that is named Santa María Ostula.

We express our respect and solidarity with the mobilizations of the community to which we say that in the collective heart of the National Indigenous Congress shines an intense light fed by the dignity of Ostula and we call to the Native peoples and civil society of Mexico and the world, to the national and international Sixth, and to the honest communications media to be attentive and in solidarity.

For the Holistic Reconstitution of Our Peoples

Never More a Mexico Without Us

← CNI, all flying together
And it trembled repeatedly…! →