“THE CNTE CHIAPAS IS EFFECTIVE, THANKS TO THE PARENTS’ SUPPORT,” TEACHERS RECOGNIZE AFTER HUGE MARCH 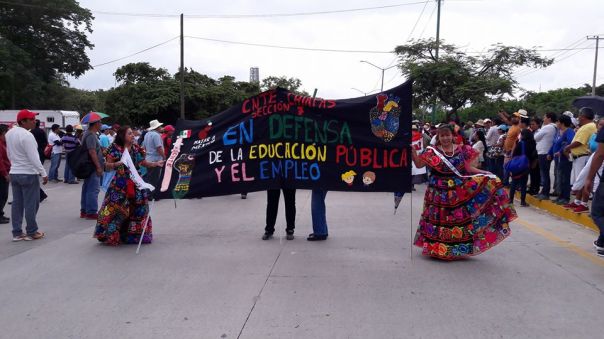 “It’s sad that there is no start to the school year because of the government’s political stupidity,” members of the National Coordinator of Education Workers (CNTE) pointed out after a huge march of more than 100,000 teachers and parents today in the Chiapas capital. “Thanks to the support of the parents and their walking with us, the teachers’ movement is effective,” asserted the teachers, on strike since 110 days ago, in protest of the self-named “education reform.”

“But more important than the start of the school year is defending the right to public education, faced with the interests of the impresarios in power,” the CNTE teachers exposed during a meeting in the central park of Tuxtla. “Of what use would it be to start the school year if tomorrow the children of workers won’t have the right to education because it will be privatized,” the dissident teachers warned.

“The thousands of federal police that the government has sent in recent days and ever since 2013, have not been able to stop the teachers’ movement,” the educators emphasized faced with the arrival of federal police in the Chiapas capital, who threaten them with possible evictions. “We will know how to defend any aggression, but the exit has to be through the path of dialogue,” the teachers pointed out.

“What will Peña Nieto report today in the government report: who the police killed in Michoacán, who they killed in Nochixtlán Oaxaca, or about their million-dollar houses?” The Chiapas teachers asked these questions about the federal government report this September 1 and about the massacres and corruption scandals in the current Peña Nieto administration.

“The government bet that the movement would end with the end of the vacation period. Neither the sun, the water or the repression have been able to bury the movement,” the CNTE strikers. “The education reform is privatizing and punitive, and perversely the government argues and tries to manipulate that it seeks to raise the level of education,” they added during the meeting in Tuxtla.

“The illiterate president wants to throw the teachers into the streets, but the teachers aren’t going to permit it,” members of the teachers’ movement asserted. “We don’t ask for a salary increase or a holiday bonus, only to be participants in a real education project; but the government refuses because it defends the impresarios’ business,” the teachers emphasized.