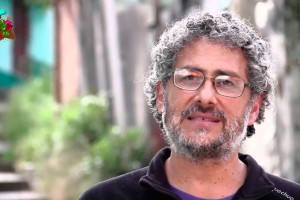 Mexican activist Gustavo Castro Soto [1] witnessed the murder this morning of the indigenous environmentalist Berta Cáceres, an attack perpetrated in her house located in the El Líbano neighborhood of La Esperanza, in Intibucá, Honduras.

Castro Soto, a sociologist by profession, was injured during the attack on the Lenca leader and coordinator of the Civic Council of Popular and Indigenous Organizations of Honduras (Copinh).

The police confirmed that Soto is a protected witness and could contribute elements that will permit clarifying Cáceres murder, Honduran newspaper La Prensa emphasized this afternoon.

Human rights defenders and members of the organization Otros Mundos, AC protested this afternoon in this Chiapas city because of the murder of Berta Cáceres and they also demanded assurances of security and protection for the Chiapas activist and environmentalist Gustavo Castro, who was imparting capacity-building workshops in Honduras.

Members of the organization Otros Mundos AC, founded by Castro Soto, demonstrated publicly together with other activists to express their anger over the murder of Berta Cáceres, and at the same time said that they are worried about the status of the Chiapas activist’s physical condition.

The protesters confirmed that: “this morning armed individuals violently entered the house and murdered Berta Cáceres, an attach in which Gustavo Castro was injured. He survived the attack and thus became an actor key to the investigations that will clarify the environmentalist’s murder.

“Berta as well as Gustavo are two people recognized for social and environmental struggle on an international level, which shows the coherence of their lives dedicated to the defense of the rights of indigenous and campesino peoples, who they have accompanied in their resistance processes so that in a peaceful and organized manner, they might avoid the neoliberal project of the regional governments that appropriate Mesoamerican territory through their deadly extractive projects,” friends and compañeros of both activists pointed out in Chiapas.

Therefore, they asked the Honduras government for its prompt attention, intervention and follow up “to this lamentable and most grave event in the life of the Honduran people. We ask you to provide all possible legal and political measures to guaranty immediate protection to our compañero Gustavo Castro so that, once he has given his statement to the Honduran State, he can return to Mexico without problems.”

They also indicated that at this time it’s fundamental to guaranty protection and the life of Gustavo Castro because of the relevant role he acquired in this lamentable murder.

At the same time, they demanded that the security of all the members of the General Coordinator of the Copinh be guaranteed.

Members of the Mesoamerican Movement against the Extractive Mining Model (M4), the Mexican Network of those Affected by Mining (Rema) and Otros Mundos Chiapas organizations participated in the protest.

[The article continues with a list of other Latin American organizations that added their names to the demand.]

← EZLN: The arts, sciences, original peoples and the basements of the world
Honduran government is preventing Gustavo Castro from leaving |Sign petition →