THE MAYOR OF OXCHUC RESIGNS AFTER SIX MONTHS OF PROTESTS 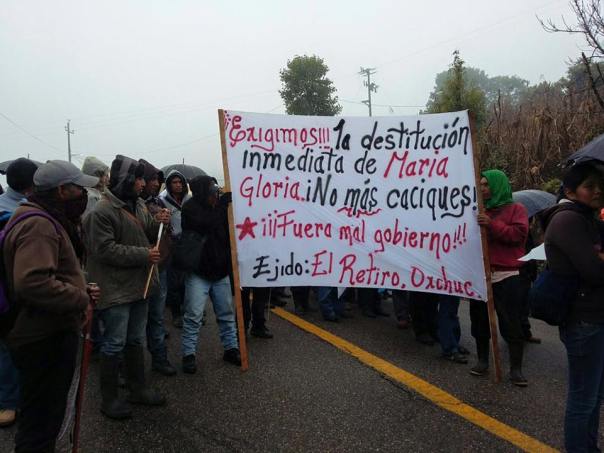 After six months de protests on the part of residents of Oxchuc municipio, María Gloria Sánchez Gómez, mayor-elect of the Green Ecologist Party of Mexico (PVEM, its initials in English), resigned her position.

Local deputy Judith Torres Vera, Vice President of the local (state) Congress, confirmed it. She specified that last night Sánchez Gómez went to the legislative confines to request an indefinite leave of absence, which is interpreted as a definitive resignation according to local law.

Within the framework of the dialogue table installed this afternoon, the local deputy reported to leaders of the dissident movement that the mayor had presented her resignation, as they demanded, and therefore next Wednesday, February 10 it will be sent to the standing commission and on Thursday, February 11 the substitute mayor will be named.

Torres Vera warned that a municipal council would not be formed, but rather through uses and customs, through a plebiscite, the communities would elect their new mayor to propose to the full local Congress.

“What we want if for peace to prevail in the municipio of Oxchuc and in our state, and in that context she gave her resignation,” the legislator pointed out.

She indicated that while only the mayor presented her resignation, it is understood that all her council members leave with her, as 105 of the 115 communities demanded today in a big march, but that will be defined between Wednesday and Thursday.

About the agreements made at the dialogue table this noon, the indigenous accepted returning to classes and the return of those expelled from the municipio, in other words, family members and collaborators of María Gloria Sánchez Gómez (around 22 family members).

Since last July 19, when María Gloria Sánchez was declared the winner after Election Day, groups of dissidents began a series of protests against her. The mayor should have taken possession of the office on September 1, 2015, but she was never permitted.

The first group that initiated the protests was repressed in October, after which new communities joined in, and on January 8 the majority joined when the second attack was perpetrated. In total, the residents of 105 of the 115 communities marched this Friday to demand the abdication of the PVEM’s mayor, who together with her husband, Norberto Sántiz López, former federal deputy and twice mayor for the PRI, maintained a political boss system (cacicazgo) in Oxchuc for 15 tears.

Originally Published in Spanish by Proceso.com