THOUSANDS MARCH in CHIAPAS to PROCLAIM “A NEW CONSTITUTION” 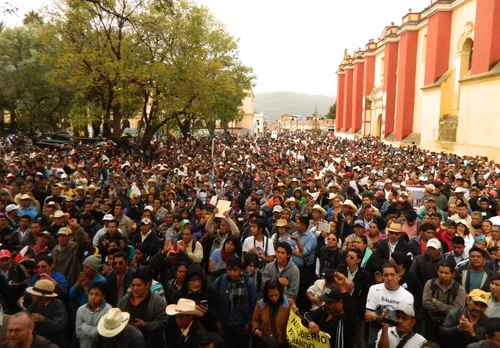 Thousands of persons marched yesterday in this city to later participate in the public proclamation of the Citizen and Popular Constituent, which will have to elaborate and reach consensus on a new Political Constitution for the country.

In a manifesto, the attendees expressed rejection of the structural reforms, the megaprojects, mining exploitation, the capitalist system and the political class, at the same time that the called for organizing a “big national dialogue” for setting the basis of a new social pact, because “it’s no longer time for demanding, but rather for constructing from our different cultural identities.”

Upon heading the act, the Bishop of Saltillo, Coahuila, Raúl Vera López, to whom the indigenous delivered the staff of command, said that 21 years ago, with the Zapatista Uprising, the “ferment” of a new constituent emerged in Chiapas, but “now they are no longer just our brother and sister Mayas that ask for a new social pact, but rather all Mexicans.”

He asserted that in the same way in which the indigenous Zapatistas “contributed to the construction of a just indigenous law (the San Andrés Accords) that never entered the Constitution, now all Mexicans want a new Magna Carta that reflects a new social pact in which we all are included, and in which our native peoples are represented with all their cultural richness and millennial wisdom.”

He added: “We no longer want that indifference of power where the authority that we delegate to a government is perverted to put our resources and territory at the service of the multi-national corporations and of the governments and States from which they come, but rather at the service of all the Mexicans that want peace with justice and development with a dignified life.”

To the cries of: “a new constituent is urgent; re-founding the nation is our mission” and “bringing down the President is urgent,” thousands of people from diverse political, social and religious sectors of different municipios in the state started marching at 9:30 AM from the four points of San Cristóbal de las Casas.

They converged in the central park, where they made the public proclamation of the Citizen and Popular Constituent and remembered the deceased Samuel Ruiz García, Bishop of the Diocese of San Cristóbal, and Amado Avendaño Figueroa, governor in rebellion from 1994 to 2000.

“Today is a historic day that will be remembered in Chiapas and in Mexico because the presence of thousands of persons is a clear sign that the people have taken consciousness about the disastrous situation that we are experiencing, and armed with valor and dignity assumed the responsibility of transforming this reality,” affirmed the Citizen and Popular Constituent Council of Chiapas.

Posted in English by Compamanuel.com

Translated by the Chiapas Support Committee from the original Spanish