Escuelitas Zapatistas, an invitation for us to organize 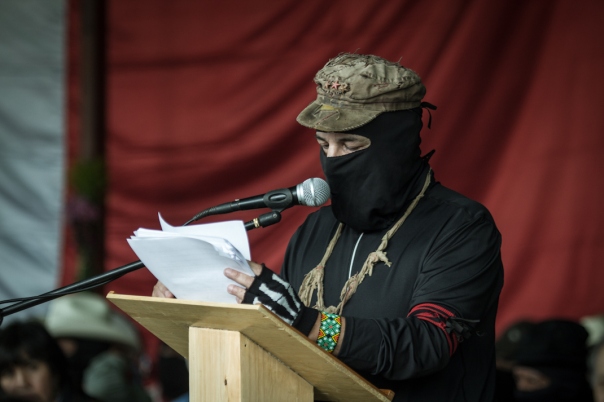 “The EZLN, through its Sixth and International Commissions, will announce a series of initiatives, of a civilian and peaceful character, to continue walking together with the other Native Peoples of Mexico and the whole continent, and together with those who, in Mexico and in the entire world, resist and struggle below and to the left.” (The EZLN announces its next steps) Subcomandante Insurgente Marcos, December 30, 2012.

From the beginning the vision of the Zapatistas has been to construct their autonomy together with the people of Mexico and the world. Massive support from the Mexican public and world opinion saved them from being wiped out by further massacres in 1994. Later that year they organized a national democratic convention in Chiapas. In 1995 they held a consultation with the people of Mexico to ask the people in all parts of the country about indigenous culture and the steps Mexico needed to take towards dialogue and democracy from below. They also presented their 13 demands for land, housing, work, food, health, education, culture, information, independence, democracy, liberty, justice and peace, which are not just for them, but rather for all people from below. More consultations were done throughout Mexico in 1999 and the March of the Color of the Earth visited 13 states of Mexico in 2001. Then came the 6th Declaration and the Other Campaign in 2005-6. The Escuelitas (Little Schools), which began in 2013, are their most recent way of reaching out to others struggling against capitalism and working to create another world. In Level 1 of the Escuelitas, the Zapatistas permitted us to participate in their resistance and thus be directly connected to them. In Level 2, they connect with us by sharing online so that many who can’t go to Chiapas but who can learn from the Zapatistas’ experience organizing and building their organization in clandestinity.

In the first level of the Escuelita we lived in Zapatista villages and the compas shared with us their everyday resistance and their construction and practice of autonomy mostly from 1994 to the present. We worked with our host families on their everyday economic activities, everything from carrying water and collecting firewood to tending the cattle, cultivating the milpa [1], coffee and sugar cane. We visited their autonomous schools and health centers and learned about autonomous government. Our host families sometimes shared their history with us around the dinner table, how things have changed for them now that they live autonomously and their participation in the uprising. We were given readings, which were testimonies of many Zapatista women and men who had served in various levels of civilian autonomous government.

The second level of the Escuelita has been conducted entirely online. The readings emphasize the need to organize our communities to resist the capitalist hydra economically and politically. We were given the link to a video where the Zapatistas shared how they formed their organization and how they organized and recruited new members, educated, encouraged, and protected each other as a clandestine organization beginning as early as 1983 up until the 1994 uprising, when they became public. The video consisted of testimonies from those who had been and some who still are both local and regional responsables [2] during clandestinity. Responsables spoke from each of the five Caracoles, or centers of Zapatista regional government: Caracol 1 La Realidad, Caracol 2 Oventic, Caracol 3 La Garrucha, Caracol 4 Morelia, and Caracol 5 Roberto Barrios.

The Zapatistas made it very clear their reasons for sharing this precious information. They hope that learning how they went about organizing will give us ideas and help us organize in other parts of Mexico or in our own communities in many parts of the world.   They are very aware that they cannot do it alone, that they need us to organize too, but that we may need to do it in our own way depending on our unique situations. We are all in this together and we need not only each other’s support but also each other’s vision.

In the Escuelita 2 video the local and regional responsables during the EZLN’s 10 years of clandestine formation shared with us their tasks and sacrifices. The local responsables coordinated the organization’s work in the communities. They observed how people participated in the community and recruited new members who exhibited responsibility and understanding. They were in charge of orienting new members and raising their consciousness to understand why their lives were so hard and the necessity to struggle and to study in order to prepare the struggle.

The responsables also coordinated local security. Women were especially important for security since they usually stayed in the community and were aware when people who didn’t belong there were present. The responsables, both men and women, also convened meetings and assemblies. Sometimes meetings took place in the middle of the night on stormy nights when people would not be seen or heard as they left home and traveled to a safe meeting place.

Local responsables also organized the training and equipping of the milicianos. [3] They also organized collective work, which was necessary to free up time for those with other responsibilities in the organization as well as to earn money to buy necessities for the struggle including boots and weapons. The sewing collectives sewed uniforms. The women collectively made tostadas and women and men collectively grew the food for the milicianos and insurgents. Many women and men had responsibly for this collective work and for security but the responsables oversaw the collectives in their area and communicated information about any problems and needs to the regional responsables.

The regional responsables oversaw the work of the organization in wider regions. They oriented the local responsables, prepared and encouraged the milicianos and raised the consciousness and understanding of members of the organization. In isolated areas compas often became discouraged so the responsables organized fiestas so that the members in a region could meet each other and see how many hundreds and thousands of compas were committed to the struggle. The Zapatistas love parties, all without drinking alcohol, which was against the EZLN’s rules.

So why have the Zapatistas decided to share this information with us now? They want us to organize too in our own way. They need people all over Mexico and the world to organize and to be in touch with them. It is the only way our movements can resist the capitalist hydra whose tentacles reach all corners of the earth and all aspects of life. I think they also want to share this history with their youth. An entire generation has grown up since the uprising that did not participate in building the organization and preparing for war. Zapatista resistance now requires creativity and sacrifice but it is very different. It is important that the youth know what came before, what has changed, and the ingenuity, discipline and sacrifice that went into building the organization they have always known.

Our exam to pass Escuelita 2 consisted of 6 questions, questions which each of us had to write and ask the Zapatistas. As Subcomandantes Moisés and Galeano explain: “The questions are important, as is our Zapatista way, they are more important than the answers… What interests the Zapatistas are not certainties but the doubts because we think that certainty immobilizes, that one is still, content, sitting still and not moving, as if we had arrived or we already knew. On the other hand, doubts, questions, make one move, search, not be still, not be in conformity, like day and night don’t pass, and the struggles from below and to the left are born of inconformity, of doubts and restlessness. If one conforms it’s that one is waiting to be told what to do or has already been told. If one is not in conformity, one searches for what to do.” (Second Level of the Little School, July 27, 2015).

[1] A milpa is much more than a field of corn. It is a diverse area of cultivation. The dominant plant is the basic grain of the people, corn. Beans grow up the corn stalk, different forms of squash creep along the ground and many medicinal and culinary herbs grow in and around the milpa.

[2] A responsable is the person responsible for a certain task or group of tasks. In the context of early EZLN organizing the responsable seems like more of a political operative or organizer.

[3] The milicianos were and still are somewhat like the National Guard. They have military training, but are not insurgents, and can be called to active duty in an emergency.

← A Reflection and application from the Second Escuelita
López y Rivas: Video for Level 2 of the Escuelitas →