A Reflection and application from the Second Escuelita

[Last Tuesday evening, members of the Chiapas Support Committee got together and shared what they learned from the background readings and Video for Level 2 of the Escuelitas Zapatistas (Little Zapatista Schools). Several people shared their reflections on Level 2 in articles for our Chiapas Update newsletter. The first is posted below.]

“TRYING ON A SHOE, OR CLOTHES:” A Reflection and Application from the Second Escuelita 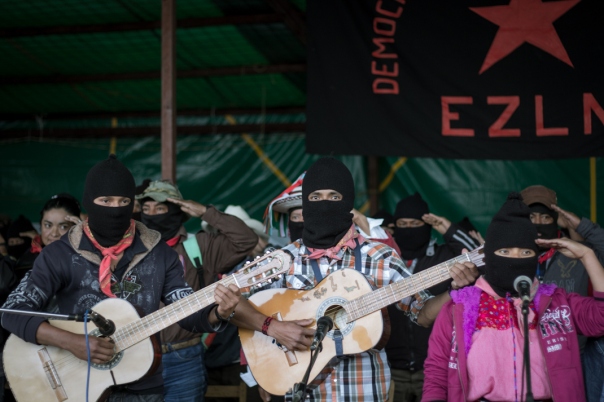 Zapatista musicians play at the Homage and Seminar in Oventik, May 2015.

“That is why we say we are very other. Because we move as if trying on a shoe, or clothes – you measure and see if it fits, try it on, and if not then you keep looking for the one that fits. That’s how we are, compañeros, compañeras, brothers and sisters, that is what our resistance and rebellion is about.” — Subcomandante Insurgente Moisés, “Resistencia y Rebeldía Zapatistas II” (“Resistance and Rebellion II”), 7 May 2015

One of the themes running through the assigned readings and video recording for this year’s second level of the Zapatista’s Little School (Escuelita) was how much the compañer@s living in Zapatista Territory have learned through practice. I have long thought of the practice-driven approach of the Zapatistas as having lessons for us in movements here, but I had not seen such a clear explanation of both the philosophy underlying this approach, and some of the specific lessons it has taught, until I made my way through the curriculum of the segundo nivel.

A few years ago, after describing to fellow activists my understanding of the Zapatista phrase caminar preguntando (walking while asking questions), I was asked whether the Zapatistas’ method of learning along the way was similar to Marxist or religious concepts of “praxis”. Although I was familiar with this term, I wasn’t sure what to say at the time, so I hedged. After thinking about it a bit more, I realized that when friends of mine in movements had used the term “praxis”, they seemed to mean a form of practice that starts with an overall theory and then applies it through action. Part of the idea is that everyday practice is the means by which oppressed people actually learn how to change the world: understanding comes from doing, not just from hearing or reading. But particularly in movements of the left in this country, the use of “praxis” seems also to be infused with Gandhian and/or vanguardist thinking. Only through praxis can we bring about revolution, under this understanding of the concept, because without action, our theories are just words. Talk is cheap. “You must be the change you wish to see in the world,” as Gandhi said. And this is so because you must lead by example. Who would trust a guru who did not follow his own teachings?

So I sensed that the Zapatista approach to practice was not quite captured by the term “praxis” as I had generally seen it employed, because in caminar preguntando we begin by assuming that whatever we think now is probably wrong in crucial respects, and that we will learn what our theory should be as we go along, rather than primarily learning to appreciate what it means and demonstrating to others that we can apply it. As Subcomandante Insurgente Marcos (now Galeano) wrote in 2004: “We are trying, with our clumsiness and our wise actions, definitions or vagueness, just trying, but putting life into it, to build an alternative.  Full of imperfections and always incomplete, but our alternative.” Not the words we expect from a guru or vanguard.

In the assigned readings for the second level, Moisés describes an example of how the Zapatistas have moved from “shoe to shoe” in their search for a better fit. Communities began by working collectively 100% of the time. There would be, for example, one milpa (corn field) for everyone. Over time, however, they learned that this approach worked less well than more complex arrangements that involved a mix of collective and family allotments and labor. The division of time now varies by community, and there are different levels of collective work and control: region, autonomous municipality, and zone, in addition to the community. The goal was to create a robust agreement that worked for everyone and was sensitive to problems and contexts (weather events, shortfalls, over-harvesting, different family sizes, needs, etcetera…).

Moisés says, “Here what we learned in practice is that what we were doing wasn’t working, that is, we made a mistake, and we failed when we required 100% collective work. We saw that this didn’t work because there were complaints; there were a lot of problems.” I think it is useful to contrast this with the more ideologically or theory-driven approach that we often see in movements, both capitalist and anti-capitalist: Those who complain are lazy (or are counter-revolutionaries). Problems come from those who are unproductive (or selfish).

The Zapatista approach is piecemeal: finding a shoe that fits is distinct from finding a good shirt or blouse. Theory-driven politics, by contrast, tends to push us to choose between entire wardrobes. In a widely read piece from earlier this year, L.A. Kaufman wrote about “The Theology of Consensus” in a way that portrayed consensus decision making as a religious doctrine that should be abandoned because it failed, for example, to yield effective decisions in the general assemblies of the Occupy movement. A Zapatista-like assessment would, I think, be more analytical. It would look at the many elements that vary across consensus procedures and ask which ones are sources of problems, and which should be retained depending on the context. The whole-wardrobe approach, by contrast, urges us to throw out everything and start over. That only makes sense if there is nothing in the wardrobe worth keeping.

The Zapatistas have held together as an organization for 32 years, and the rebellion that began on January 1, 1994, will soon celebrate its 22nd anniversary. What Moisés tells us in the readings for the second Little School is that the movement has survived this long because it has prioritized the organization and its radically democratic principles, has pursued what works well, and has modified what was not working. Such a simple lesson! But one that is ripe for application in our own attempts to build community and autonomy here in the bay area.

← Ejido Morelia: the Army’s impunity
Escuelitas Zapatistas, an invitation for us to organize →