Posted on May 22, 2015 by Chiapas Support Committee

CRITICAL THINKING AGAINST THE CAPITALIST HYDRA 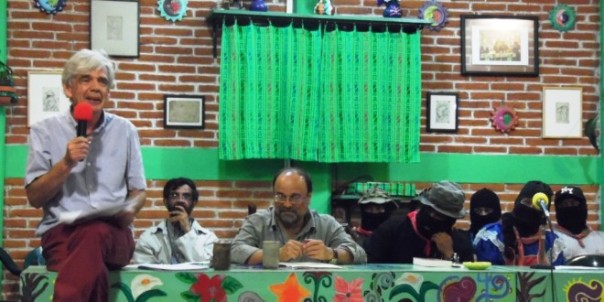 The storm is coming; or better yet it is already here. It is here and it is probably going to intensify. We have a name: Ayotzinapa; Ayotzinapa as horror and also as a symbol of many other horrors, Ayotzinapa as a concentrated expression of the fourth world war.

Where is the storm coming from? Not from the politicians; they are merely the executors of the storm. Not from imperialism, it is not a product of the governments, nor from the most powerful governments. The storm surges from the form in which society is organized. It is an expression of the desperation, the fragility, the weakness of a form of social organization that is already past it’s expiration date, an expression of the crisis of capital.

Capital as such is a constant aggression. It tells us every day “you have to mold what you do in a certain way, the only activity that is valid in this society is the one that contributes to the expansion of capital’s profits.”

The aggression that capital is has a certain dynamic. To survive it has to subordinate our activity every day more intensely to the logic of profit: “today you have to work faster than yesterday, bend over more than yesterday.”

With that we can see capital’s weakness. It depends on us, what we want and accept what it imposes on us. If we say “excuse me, but today I am going to cultivate my plot of land.” or “today I am going to play with my children,” or “today I am going to dedicate time to do something that makes sense for me,” or simply “We are not going to bow down,” then capital cannot extract the profits it needs, the rate of profit falls, capital is in crisis. In other words, we are the crisis of capital, our lack of subordination, our dignity, and our humanity. We are the crisis of capital and proud of being so, we are proud of being the crisis of the system that’s killing us.

Capital despairs of this situation. It looks for all the possible ways to impose the subordination it needs: authoritarianism, violence, labor reforms, educational reforms. It also introduces a game, a fiction; if we cannot extract the profits that we require, we are going to feign that there exists, to create a monetary representation for a value that has not been produced, expand the debt to survive and try to use it at the same time to impose the discipline that is needed. But this fiction increases the instability of capital and additionally it fails to impose the necessary discipline. The dangers for capital that this fictitious expansion represents becomes clear with the collapse of 2008, and with that it becomes more evident that only way out for capital is through authoritarianism: all the negotiation around the Greek debt tells us that there is no possibility for a softer capitalism, that the only path for capital is the path of austerity, of violence; the storm that is already here, the storm that approaches.

Capital depends on us, because if we do not create profits (surplus value) directly or indirectly, then capital cannot exist. We create capital, and if capital is in crisis it’s because we are not creating the necessary profits for the existence of capital, that’s why they’re attacking us with so much violence.

In this situation, we really only have two options of struggle. We can say “Yes, we are in agreement that we are going to continue producing capital, promoting the accumulation of capital, but we want better living conditions.” This is the option of the governments and parties of the left: of Syriza, of Podemos, of the governments in Venezuela and Bolivia. The problem is that, even though we can improve our living conditions in some regards, through the desperation of capital itself there is very little possibility of a more humane capitalism.

The other possibility is to say “Good by, capital, leave, we are going to create other ways of living, other ways of being in relationship, among ourselves and also with the non-human forms of life, ways of living that are not determined by money and the search for profits, but through our own collective decisions.”

Here at this seminar we are at the very center of the second option. This is the point of encounter between Zapatistas and Kurds and thousands of more movements that reject capitalism, attempting to construct something different. Everyone of us, women and men are saying “Capital, your time has passed, leave now, we already building something else.” We express in many different ways: We are making cracks in the wall of capital and attempting to promote its confluences, we are building the commons, we are communing, we are the movement of doing against work, we are the movement of use value against value, we are the movement of dignity against a world based on humiliation. We are creating here and now a world made of many worlds.

Possibly, we do not have it, yet. Many of us who are here today have a salary or our grants that come from the accumulation of capital or, if not, we are going to return next week to look for work from a capitalist. Our rejection of capital is a schizophrenic rejection: we want to say a definitive goodbye, and we cannot or it costs us a lot of work. Purity does not exist is this struggle. The struggle to stop creating capital is also a struggle against our dependency on capital. Which is to say, it is a struggle to emancipate our creative capacities, our strength to produce, our productive forces.

How do we advance, how do we walk? By asking questions, of course, asking and holding each other and organizing ourselves.

← La Garrucha denounces paramilitary acts in San Manuel
EZLN: Whatever color you vote for, it’s going to get worse →