The Zapatistas and Hope

THE ZAPATISTAS AND HOPE

*We think that it is necessary for one of us to die so that Galeano lives. 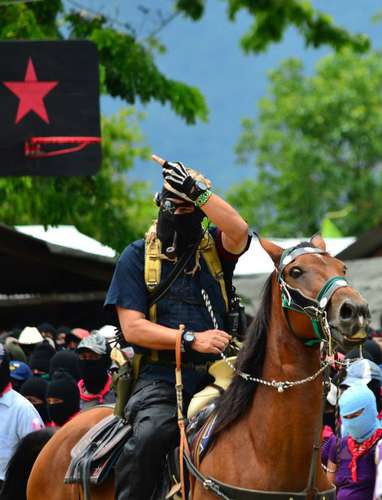 To satisfy the impertinence that is death, in place of Galeano we put another name, so that Galeano lives and death takes not a life but just a name – a few letters empty of any meaning, without their own history or life. That is why we have decided that Marcos ceases to exist today.

And death will go away, fooled by an indigenous man whose nom de guerre was Galeano, and those rocks that have been placed on his tomb will once again walk and teach whoever will listen the most basic tenet of Zapatismo: that is, don’t sell out, don’t give in and don’t give up.

Given the above, at 2:08am on May 25, 2014, from the southeast combat front of the EZLN, I hereby declare that he who is known as Subcomandante Insurgente Marcos, self-proclaimed “Subcomandante of stainless steel,” ceases to exist.

Passages from Between Light and Shadow, Subcomandante Galeano, May 2014

2014 has been a turning point year for Mexico and the U.S.

We are asking you to join us in building grassroots support and solidarity with the Zapatista communities. Please make a generous donation to directly support the Zapatista efforts in constructing autonomy. Why?

2014 was the 20th anniversary of the EZLN-led indigenous uprising in Chiapas. The Zapatistas began marking this momentous anniversary launching “La Escuelita Zapatista,” the Little Schools of Freedom according to the Zapatistas, in 2013, where they invited community leaders, youth, elders, women, children and even world-class intellectuals to learn from them how they organized their revolution.

In 2014, the Zapatistas also shared the deep changes they have accomplished, making historic transitions consolidating the Zapatistas communities’ power from below. This includes:

To us, the Zapatistas are synonymous with hope. How do we persist and build our own resistances in the long struggle for justice across borders? The Zapatista communities have shared their own experiences and consistently organized spaces for international dialogue to build connections and movements against neoliberalism, war and racism and for humanity and a different way of being together.

With love, pain and rage the Zapatistas laid the body of Compañero Galeano to rest while at the same time ensuring that his name and spirit would live on. The person we had known as Subcomandante Marcos for a little more than 20 years died symbolically and resurrected as Subcomandante Galeano so that the memory of the brutally murdered compañero would live on. Although it had been coming gradually, the May 2 murder of Compañero Galeano in La Realidad provided the steppingstone for a transition to Indigenous leadership of the EZLN in the person of Subcomandante Moisés, a natural and foreseen transition despite what the corporate press may have said.

The Zapatistas consider that transition and symbolism to be of such importance that they questioned two members of the Chiapas Support Committee (CSC) about our understanding of it during our visit in September and were pleased that we paid no attention to the interpretations of the corporate (“for pay”) media, but rather the direct word of the EZLN.

Originally intended to be a brief visit to clarify an education project in the region of La Garrucha, the purpose of our visit expanded when we received the news about the attacks and forced displacements in San Manuel municipio (county), with which the CSC has had a close relationship since 2002. After clarifying the education project with regional education coordinators, attention turned to the more than 70 Zapatistas displaced from their homes in 3 San Manuel communities. The Good Government Junta gave us permission to visit San Manuel.

We traveled to San Manuel and met with the autonomous municipal council, the health care promoters, warehouse workers and education promoters (teachers). We learned that the displaced families lost everything when they fled to save their lives and avoid a massacre. The autonomous council stated that the government paid the paramilitaries to attack and displace the three communities, just as the EZLN’s investigation revealed regarding the murder of Galeano. According to Subcomandante Moisés, San Manuel was attacked in retaliation for the Exchange (Sharing) between the National Indigenous Congress (CNI) and the EZLN, just like Compañero Galeano was murdered in retaliation for the very successful Little Zapatista Schools during 2013 and at the start of 2014. The government’s message: You’re going to pay a price for organizing!

Despite the Mexican government’s counterinsurgency and severe repression, we also have some good news to report from San Manuel. The municipio and its more than 40 communities remain together, well managed and in resistance. Autonomous authorities specifically stated that the projects the CSC constructed with them continue to thrive, thereby enabling the municipio to function and succeed.

This year we completed a three-year autonomous primary education project in the region of La Garrucha, which included the construction and or re-modeling of schools, continuing education for the teachers and teaching materials for both the education promoters and the students. We also provided emergency financial support to those displaced from the three Zapatista communities in San Manuel.

While in La Garrucha the Junta told us about an education project that is currently being developed for the region: one or more secondary (middle) schools.

In contrast to the other Caracoles, the La Garrucha region has no secondary school. The debate is whether to have one secondary school for the entire region or one in each autonomous municipio. Whatever the region’s decision may be the Chiapas Support Committee is committed to supporting the secondary school project. We need your help to do that.

Please join us and give a generous donation that will go in its entirety to help the Zapatistas build schools and autonomy!

Los 43: They were taken alive! We want them back alive!

Compañero Galeano’s murder marked the opening of a new wave of political repression and killings carried out in collusion between Mexican government forces and narco-drug cartels and paramilitaries.

Mexican youth bore the brunt of the carnage left by organized crime and drug trafficking gangs in various states of Mexico. Local police and politicians with organized crime have been responsible for the extrajudicial executions of 22 arrested and disarmed youths by Mexican Army soldiers in Tlatlaya (June) and, finally, the unspeakable crime committed against students of the Ayotzinapa Teachers College that resulted in six dead and 43 forcibly disappeared –a crime against humanity– still not clarified (since September).

The Chiapas Support Committee continues to translate and publish educational information about Mexico and the Zapatistas through our various social media outlets.

This year we met with students that attended the Little Zapatista Schools (Escuelitas Zapatistas). We worked with other collectives to organize a successful demonstration at the Mexican Consulate following Compañero Galeano’s murder.

Afterwards, we participated in forming a Zapatista urgent response network in order to have a larger and more coordinated response to any future attacks against the Zapatistas.

Our challenge in the coming year is to extend that coordination beyond emergency response.

As the Chiapas Support Committee enters its 16th year and the EZLN turns 21, we are asking you to make a generous donation so that we can continue strengthening our work in support of the Zapatista communities and their construction of autonomy, as well as to support our local organizing efforts.

And, we are registered with Amazon Smile and The Network for Good.

We thank you for your continued interest in and support for the peoples of Chiapas and assure you that your support makes a critical difference in the lives of many and that we and the Zapatista communities will thank you from the bottom of our hearts.

For peace & justice without borders,

← EZLN: On the eve of the festival
Festival of Resistances begins in Xochicuautla →