EZLN and CNI In Solidarity with the Yaqui Tribe

To the Yaqui Tribe, 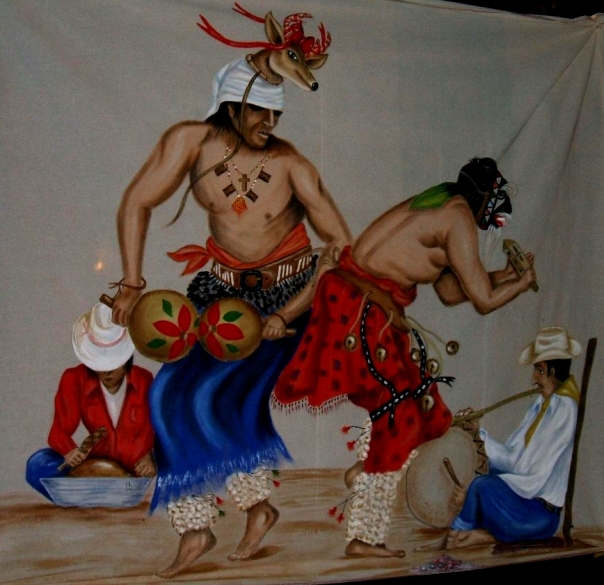 Rancho Peñasco Silkscreen of Traditional Dance of the Deer

To the People of Mexico,

To the National and International Sexta

To the governments of Mexico and of the World

From the mountains of the Mexican Southeast in rebel Zapatista territory we send out our joint word as Peoples, Nations and Indigenous Tribes that make up the National Indigenous Congress, through which we send a fraternal greeting of strength and solidarity to the members of the Yaqui Tribe, to their Government and Traditional Guard, hoping to find everyone well.

We greet the Yaqui Tribe’s historic mobilization in defense of their existence and of their territory, a mobilization that in the last 40 days has been demonstrated in the establishment of an encampment in resistance around the International Highway in Vicam, First Seat of the Yaqui Tribe, to the robbery of the water that the bad government seeks to concretize through the Independence Aqueduct, which affects not only the Yaqui but the whole south of Sonora; despite the fact that the Yaqui Tribe has gone through the necessary legal steps, in which it has obtained victories that the same government has not respected. Their struggle, compañeros, is also ours, because, just like you, we maintain the certainty that the land is our mother and the water that runs through our veins is not for sale, because life that is a right and that has not been given by the bad governments or by the promoters that depend on her.

We demand the immediate cancellation of the arrest warrants and the fabrication of crimes against members of the Yaqui Tribe and we condemn the criminalization of their struggle, saying to the bad governments emanating from the political parties that the Yaqui River has historically been the carrier of the ancestral continuity of the culture and territory of the Yaqui Tribe and those that make up the National Indigenous Congress, we reiterate that if you touch one of us you touch us all, therefore we will respond accordingly to any attempt at repressing this dignified struggle or any other struggle.

Finally, we call upon the international community and the brothers and sisters of the Sexta International to stay attentive to events that will be presented in the future in the territory of the Yaqui tribe, adding yourselves to the solidarity with la Tribe and its demands.

From Zapatista Caracol Number 2 – Resistance and Rebellion for Humanity, of Oventic, Chiapas

Never More a Mexico without us