They document attacks on a Zapatista community in the Lacandón Jungle 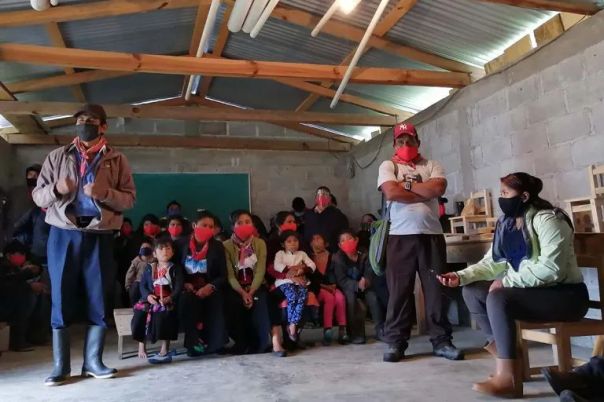 Today, a network of organizations, collectives and networks, adherents to the Sixth Declaration of the Lacandón Jungle, denounced the constant aggressions that an indigenous Zapatista community settled in the Chiapas jungle has been suffering from a group of armed civilians called “The 40 Invaders.”

After members of a group of 12 civil organizations adhered to the AJMAQ Network of Resistances and Rebellions carried out a third caravan to that indigenous Zapatista community to verify what happens there every day, they pointed out that it lives under attack, under threats from a civilian armed group.

It’s the indigenous Zapatista community of Nuevo San Gregorio, belonging to Lucio Cabañas Autonomous Municipality, Caracol 10, Flowering the Rebel Seed, Good Government Junta: New Dawn in Resistance and Rebellion for Life and Humanity, in the Patria Nueva Zone, territory that the EZLN recuperated in 1994, where girls, boys, men, women, and old ones live under permanent siege from the group of “The 40 Invaders.”

To the individuals, families, collectives, organizations, networks and communications media we extend this REPORT so that during the month of January you can contribute to the Campaign of dissemination of this document and information.

We ask you to join from your geographies, according to your ways, times and creativity, for the purpose of denouncing and letting the Zapatista families know that they are not alone. Also, to show our organization/articulation in the face of this War against the life and autonomies of the Zapatista peoples.

On January 8 and 9, 2022, a third Caravan was organized, called by the AJMAQ Network of Resistances and Rebellions, to follow up on what’s happening in Nuevo San Gregorio community, where they were before on October 28, 2020 with the First Solidarity Caravan and on January 12, 2021 when a second Solidarity and Documentation Caravan took place.

They pointed out that after the uprising of the Zapatista National Liberation Army (EZLN, Ejército Zapatista de Liberación Nacional) on January 1, 1994, thousands of hectares of land “usurped by finqueros/estate owners, were recuperated by their legitimate owners: the Native peoples.”

Based on these events, the government and its paramilitary groups have persisted in designing and executing a War to once again dispossess and control the land and territory where the Zapatista peoples construct a collective and autonomous way of life.

A video from the Ajmaq Network’s visit can be found here. There are 3 versions of the video. The #2 video has English subtitles.

They pointed out that Nuevo San Gregorio autonomous community comprises 155 hectares of recuperated land. Since November 2019, the 40 invaders began to intimidate and provoke by enclosing (fencing) workplaces and the autonomous secondary (middle) school, which has fruit trees and medicinal plants.

On February 27, 2020, the Nuevo San Gregorio community as well as the Good Government Junta attempted to establish a dialogue with the invaders making 3 concrete proposals to them: one, that the land be worked collectively; or two, give them one hectare per person; or three, divide the 155 hectares in half.

However, the invaders rejected these proposals. And from then-on the only thing that group has done is to provoke, attack and threaten the Zapatista bases.

“A concrete fact that clearly demonstrates that they don’t want the land because they need it to live, nor for a business, (but to go against the EZLN organization) is that all the invaders have their own land in the 4 communities to which they belong,” the activists said.

During 2020 and 2021, the invaders started with the fencing of the water storage tank that distributes [water] to the town, the electrification pole where the line for pumping water and the region’s tractor impede its movement.

The theft of garden vegetables, medicinal plants and fruit trees, threats to the Zapatista women and harassment of the men surrounded by invaders carrying sticks, machetes, batons and slingshots. In addition to monitoring and intimidating them at a distance, taking photos and video in the direction of Zapatistas in order to harass-besiege the families on their own land.

To date, January 2022, of the 155 hectares of recuperated land, the invaders have reduced the space and way of life, movement and production of the Zapatista families to three and a half hectares. They left the population center on half a hectare, leaving three scattered and fragmented hectares. Families, are currently found fenced-in and kidnapped on their own land.

The organizations, collectives and activists that participate in this 3rd Caravan of Solidarity, convoked by the AJMAQ Network of Resistances and Rebellions, gave an account of the documentation starting with testimonies and evidence of concrete facts about the acts of harassment, threats, destruction and dispossession towards the families and the Zapatista community of Nuevo San Gregorio.

They denounced that: “the constant criminal action of the group of 40 invaders, is in invading, fencing, kidnapping and killing the land and territory with barbed wire, which represents violating the right to the use and enjoyment of the land and territory that legitimately and in full exercise of right the Zapatista families have to forms of autonomous organization.”

← The Europe of Below and Aldama, Chiapas
CNI-CIG obtains provisional suspension of presidential agreement on mega-projects →