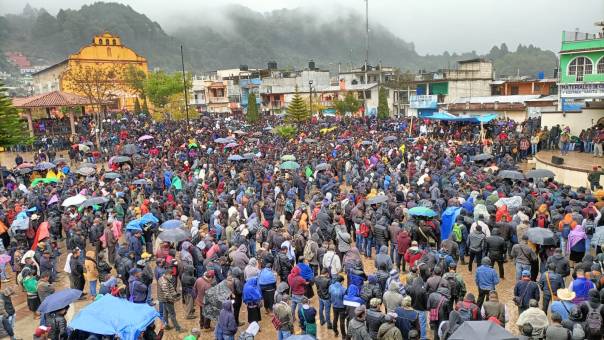 One person died and a civilian armed group irrupted, after the indigenous people of Oxchuc came to blows, following the voting by a show of hands, where the Community Electoral Body of Oxchuc Municipality (OECMO, its initials in Spanish) declared Enrique Gómez López the winner, as the new municipal president of the only indigenous municipality in the state governed under an internal regulatory system.

It should be remembered that this elective process emerged as a result of the exercise of self-determination and self-government, established in Article 2 of the Political Constitution of the United Mexican States, expressed through the indigenous consultation, where the community General Assembly is the highest body that determines the way to carry out the process of renewing municipal authorities.

On April 13, 2019, the first election of municipal authorities was held in Oxchuc municipality, under its own Internal Normative System, by means of raised hands at a single assembly in the central plaza of the municipal seat in which the citizenry of the Tzeltal municipality participated.

The General Assembly decided to renew its municipal council on December 15, 2021, through voting by raised hand in the municipality’s central plaza. Oxchuc’s elective process emerges as a result of the exercise of self-determination expressed through the indigenous consultation. The community general assembly is the highest body that determines the way in which its process of renewing municipal authorities will be carried out.

Around 14,000 people coming from 129 communities and 23 neighborhoods (barrios), a total of 142 locations that the General Assembly recognizes make up Oxchuc municipality participated in this election.

Residents of 142 communities and the different neighborhoods in Oxchuc, gathered in the central square to elect their new municipal authorities by a show of hands, according to the indigenous normative system. Although, everything was going well until, of the 10 candidates, only the two strongest to compete for the municipal presidency remained: Hugo Gómez Sántiz and Enrique Gómez López. However, the situation got out of control for the community electoral body after calling for the vote by a show of hands registered Enrique Gómez López as the winner, which did not please his opponents.

That was when the shouts of rejection began. Later, stones, bottles, chairs, rockets and other devices flew, where supporters of Hugo Gómez Santiz ran around and threw supporters of Enrique Gómez López out of the plaza. After the brawl, several people were injured, but another person was dead; his name is Pedro Santiz López, a native of the Ts´ununilja (Media Luna, in Spanish and Half Moon in English) community.

What caused the greatest fear was the appearance of an armed civilian group that came out of the crown with high-caliber weapons pursuing sympathizers of Enrique Gómez López.

Supporters of Enrique Méndez López said that this is a paramilitary group named Los María Tulukes; others pointed out that they are members of the Sentimiento de la Nación {Sentiment of the Nation). What’s certain is that they are linked, they said closely to candidate Hugo Gómez Sántiz.

Images and videos started to circular of the armed group firing shots. Into the air, while supporters of Hugo Gómez Sántiz opened the way for them to advance toward the area where Enrique Gómez López’s supporters had withdrawn.

As of this afternoon, the State Attorney General’s Office and the Secretariat of Security and Citizen Protection have not provided an official report about what happened, despite being present.

In that regard, the Institute of Elections and Citizen Participation (IEPC) of Chiapas, lamented the violent events that were generated and interrupted the development of the Single Community General Assembly for the election of municipal authorities through a show of hands.

Acts of violence are not part of, nor should they accompany any democratic exercise, therefore this Electoral Body rejects the events that altered order and peace. In that sense, we demand that the competent authorities investigate and sanction the deeds in accordance with the Law, they reported.

The IEPC added its respect for the decision of the people of Oxchuc to elect their municipal authorities through their internal regulatory system, which was carried out for the second time in the history of this municipality, but it reiterates that the success of said system requires that the different political groups reach agreements and consensus that will give viability to these exercises.

Regarding the information disseminated in various communications media and social networks, which indicate closed results between two candidates to the municipal presidency, the IEPC will be attentive to the result of the decision that, based on its self-determination and self-government, the Community Electoral Body of Oxchuc (OECMO) sends in the coming days, to be in a position to decide what is appropriate for the renewal of municipal authorities in said municipality, it added.

Nominations to the municipal presidency according to the guidelines approved by the General Assembly corresponded to 5 men and 5 women, presented to the Single Community General Assembly.

Re-Published with English translation by the Chiapas Support Committee