“If the world expects COP26 to solve its problems, we’re lost” 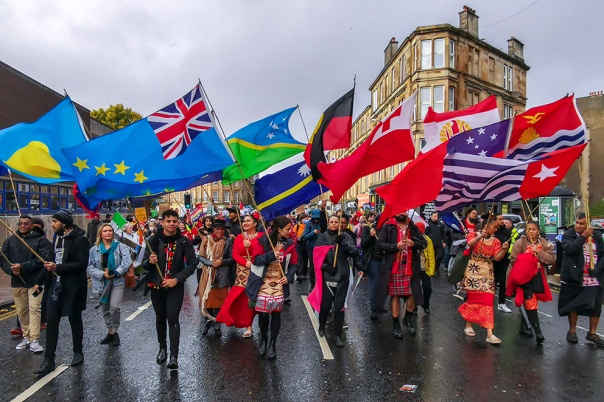 Protesters from all over the world took the streets of Glasgow, Scotland, to march against those most responsible for climate change. The event, with a carnival flair, achieved enormous diversity. It also stood up to the lengthy responses of the United Nations.

Just when COP26 reaches the halfway point of its events, in a march called by activists and citizens they were able to stand up to the governments and companies that have barely been accountable to citizens about climate change. Despite the fact that world personalities congregated at official United Nations’ activities, Glasgow streets were the center of attention.

If COP26 has been considered the most exclusive climate summit in history, the demonstration that took place in the streets of Glasgow was one of the most diverse. Some 100, 000 people, with a plurality of demands, took over the city.

More than a demonstration, it was a carnival. The music harmonized with those in attendance. There were drums, bagpipes, flutes, tambourines, djembes, violins, bongos and piccolos. They also sang songs and organized dances. The strong winds and freezing drizzle revitalized the demonstrators for hours. 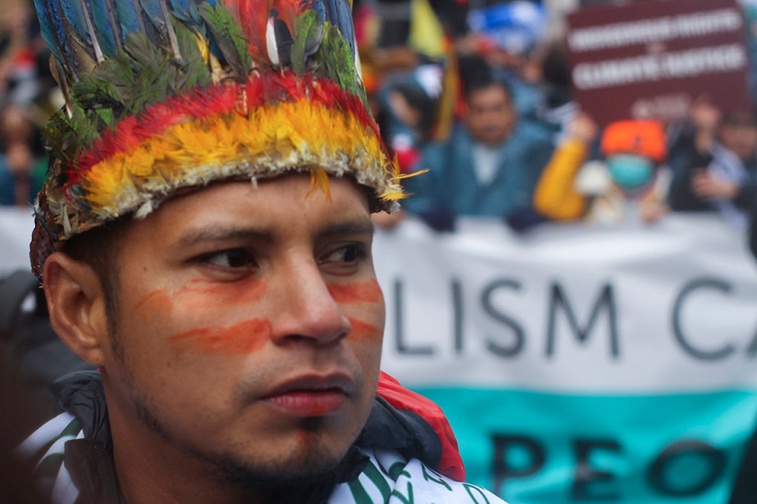 The march was headed by indigenous groups from the Amazon, Canada and Alaska; those who are in the first line of the climate battles. In the march they chanted: “we don’t need your energy transition, to hell with your colonizing rule.” Also: “We were witnesses to the arrival of the colonizers and we will be witnesses to their departure.”

At the start of the event, the activist Vanessa Nakate told the attendees: “Presidents rarely have the courage to lead. That causes citizens like you and me to stand up and demand action. And when enough people do that, our leaders will move.”

In the official installations of the United Nations, those attending the COP wear suits, and the vast majority are white men coming from first world countries. But this Thursday’s march brought together mostly young people, feminist blocs and mothers with strollers.

Violenta Campbell is a trans woman who attended the march. With a poster that denounces “we can’t drink money,” the woman summarizes this feeling that is experienced among the attendees: “in this march there is more hope than in there (COP26), at least here we can all raise our voices.”

Among the demonstrators were contingents of vegans, Marxist student leagues, socialists and anarchists. There were Tibetans, animal lovers, antifascists, pro Palestine groups, free Hong Kong groups, pro climate refugee groups and religious orders. A single bloc brought together various citizens who live on islands in the Pacific Ocean which are about to disappear. An activist from the Solomon Islands assures in an interview: “the place we have inhabited will no longer exist due to climate change and rising sea levels. No one wants to know that or they don’t want to be aware of that.”

According to its organizers, the climate action march in Glasgow brought together more than 150,000 people; it left from Kensington Grove Park, in one of the most affluent areas of the city, crossed the center, the commercial district and arrived at Glasgow Green Park. Among the attendees were mothers, infants and seniors. Photo: Arturo Contreras

In the long contingent there were also unions, indigenous Latin Americans, while on a sign that reads: “Justice for Samir;” a group of Mexicans exclaimed “Samir didn’t die, the State killed him.” In the march there were also peoples of Africa hit by extreme droughts.

A group of citizens on bicycles closed the march with the slogan: “this machine saves the planet.” Above all there were citizens, housewives, people with strollers and elderly people in disguise.

A score of scientists chained themselves on one of the main bridges that cross the Clyde River, the demonstrators who blocked one of the city’s most important arteries were arrested by Scottish police. The Scientist Rebellion collective assured that this form of peaceful disobedience helps draw the world’s attention to the urgency of taking action on climate change.

When the march approached the center of Glasgow, it passed by some of the corporations that champion dispossessions in various countries, such as Scottish Power.

When Rosa Marina Flores Cruz passed in front of the building she said: “We are in front of the offices of Iberdrola, of the subsidiary Scottish Power, just to say that they are cynical and hypocritical because they are financing COP26; they say that they are taking actions to save the planet, but they are false actions. They are green washing actions that are only washing their hands with our lands, with our territories. Using a discourse of renewable energies based on the dispossession, destruction, murder and persecution of the indigenous peoples in Mexico.” 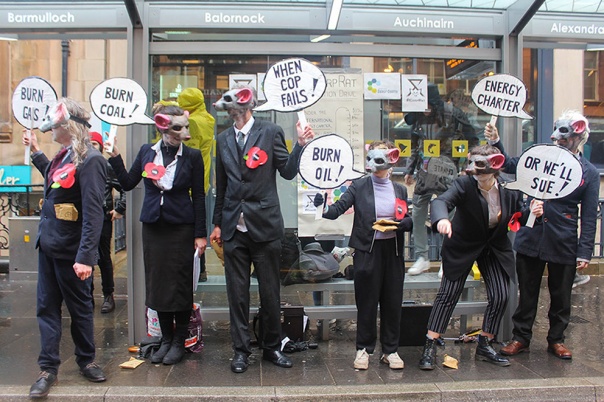 Contingents of Extinction Rebellion carried out various performances during the climate action march in Glasgow, in the image, a group of activists emulate businessmen who order using fossil fuels under the threat of suing those who don’t. Photo: Arturo Contreras

Daya Bai, a demonstrator from India, assures that the world should not put too much hope in the COP. She is sure that citizen organizations and individual actions are the way out: “If the world expects the COP to solve its problems we are lost.”

Similar demonstrations were held around the world, a hundred events were held in countries like France, Philippines, Turkey, Canada, Kenya, Switzerland, the Netherlands and Australia.

The indigenous minga refers to a meeting of several people, of different peoples, with different wisdoms and languages that place them in common to create a mutual and collective benefit, so indigenous people from all over Latin America marched in Glasgow.

At the end of the Glasgow event they called for creating a world summit of indigenous peoples to discuss climate change and leave the summit organized by the United Nations.

An indigenous member from the Amazon said at the closing of the event: “We have come here to tell our politicians not to extract more oil, no, they are killing us, our water, our life. Who do you believe; the leaders or us, the true guardians of the jungle?”

← Brief chronology of paramilitary violence in Chiapas
Amidst soldiers and cartels, academia examines the rising violence in the Southeast →

One Comment on ““If the world expects COP26 to solve its problems, we’re lost””