Exodus from Pantelhó due to political tension 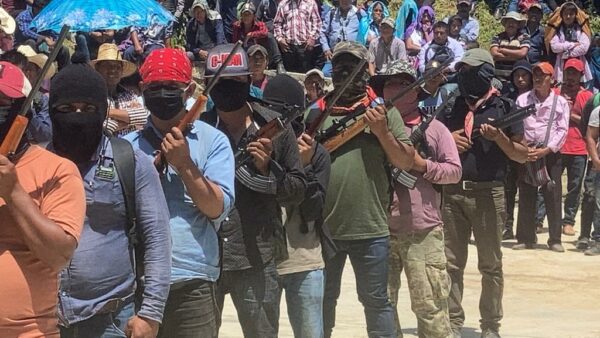 Above photo: El Machete Self-Defense Forces of the People

The Fray Bartolomé de Las Casas Human Rights Center (Frayba) reported that at least 90 indigenous people from the communities of Nuevo Paraíso, San José El Carmen and the municipal seat of Pantelhó, members of the Las Abejas of Acteal Civil Society Organization, have displaced themselves due to the political tension that place experiences, because of the possible taking of possession of the mayor-elect, Raquel Trujillo Morales, who is due to assume the position on October 1.

The Frayba assured that: “violence has been on the rise after statements from Trujillo Morales, who will take possession of his position, which has impacted and generated fear in the population, thereby causing new displacements.”

The organism over which the Bishop Emeritus of Saltillo Raúl Vera López presides, affirmed that: “the ineffectiveness and simulation of the Mexican State’s actions continues favoring an atmosphere of violence and fear against the Tsotsil and Tseltal communities of Chenalhó and Pantelhó in the Chiapas Highlands, thereby forcing people to abandon their homes.”

Meanwhile, the group called the El Machete Self-defense forces of the People affirmed that: “by the will of the entire population and by the decision of the 86 communities of Pantelhó” Trujillo’s presence will be rejected.

They added that: “the Municipal Council that Pantelhó has now will continue working with us until 2024;” it was elected through the system of uses and customs on August 9, after the request to leave office presented by members of the PRD municipal council, which Delia Janet Velasco Flores, substitute PRD mayor and wife of the mayor-elect headed.

“Political parties no longer exist in Pantelhó, Mr. Raquel Trujillo Morales; you no longer lie to the people; if you really love your people we ask you to please speak and express what the community was like during the government of your wife.”