Zapatista Community Denounces Dispossession and Harassment; Sees Hope in the Journey of Squadron 421

Above: Collective mural about the Journey for Life in the autonomous community of Nuevo San Gregorio. Photo: Sexta Grietas del Norte

The community of Nuevo San Gregorio, in Zapatista Caracol 10, denounces the increasing harassment they are experiencing after being dispossessed of their lands. They focus on organizational work, and on the journey of Squadron 421 in Europe to fight off the attacks of the group “Los 40 invasores (The 40 invaders)” which since November 2020 has been depriving them of land, food, work, education…

MEXICO CITY – The families of Nuevo San Gregorio, Caracol 10 Patria Nueva, paint a mural. They do it on one of the wooden walls of “La Casa de Todos” (The House of Everyone) They collectively illustrate the dreams that the trip of the Zapatista delegations to Europe provokes in them. They fill a boat and an airplane with color. They trace with paint brushes after discussing what they want to capture, and reflect on the dispossession of their lands that they are enduring.

Pedro assures that all the continents are represented in the mural, but above all the jungle and the mountains are seen; jaguars, toucans, mushrooms, beetles and flowers. What the Zapatista delegations will share in their journey around the world.

There are three words on the beams that connect the boat and the sea with the plane and the sky: struggle, resistance and rebellion, which they collectively decided to highlight with red paint. They draw a phrase in large black letters: “We want a new world where race and color are not differentiated.”

Pedro participated in the creation of this collective mural. He is a resident of Nuevo San Gregorio. He explains that for them, as residents of Caracol 10 Patria Nueva, the mural means that “we are not alone” and “that we walk in another place.”

“I don’t feel sad or alone, even though the invaders continue to do all this, breaking wire fences, taking away the tools for the milpa, raiding the cattle that graze on land next to the highway,” he said in an interview.

Nuevo San Gregorio is located in a forested area of the Rebel Autonomous Municipality of Lucio Cabañas, among pines, junipers and cypresses. The Tsotsil and Tseltal Zapatista support bases that live here have been under attack for a year and seven months by a group they call “The 40 invaders.” This is the group that Pedro points out is the main aggressor of the community, which is located in the official municipality of Ocosingo, Chiapas.

When they [the Zapatistas] rebuilt everything, members of the community proposed that this cabin where the mural was could be a collective store. But in the assembly they agreed, “it is Everyone’s House.” In spite of the fear, they have organized around it; and they built the health center, the collective carpentry workshop, the women’s center and the Autonomous School.

“The comrades who are making landfall in Europe are not going alone, we are with them. We know that what they are carrying is what we are working for, and what we are living. The struggle has to be one, unity in collectivism. Although the invaders divided the land, I see that they are suffering. This milpa was not like this when we planted it. It was prettier. Now I see that it is very sad. With work it was able to grow. They are not harvesting life. They are harvesting their destruction,” says Pedro, who recounts the changes in Nuevo San Gregorio and points out that now they cut down trees in an uncontrolled way in order to sell the wood.

When Squadron 421 left the autonomous territory for the ship La Montaña, they were sent off from this Caracol. A representative of the Lucio Cabañas and Comandanta Ramona autonomous municipalities told the Zapatista delegation at the farewell:

“With jubilation and encouragement, here in Caracol 10, and I am sure the other Caracoles, are also celebrating now for this first departure of the maritime delegation traveling to European towns. It is not easy, compañeros, it is a long journey, but we are going to do it, history asks it of us.” 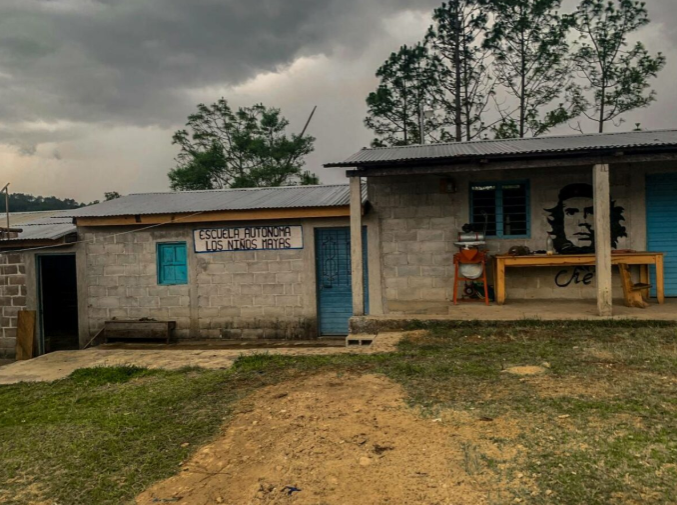 The children also suffer emotional repercussions from the harassment of the invading group. The invaders destroyed their school, so the autonomous community built another one: Los Niños Mayas. Photo: Sexta Grietas del Norte

The invasion and aggressions

“The 40 invaders” group stole 145 hectares of the 155 hectares that this Zapatista community recovered in 1994, after the uprising. They fenced them in with barbed wire and light posts in November 2020. They left the inhabitants of Nuevo San Gregorio with less than 10 hectares and destroyed the Autonomous School they had in the old farm called “Casa Grande”.

The community kept this farm because it was the result of the struggle of the grandmothers and grandfathers, who after being peons, took it over during the uprising. There they installed the Autonomous Secondary School, of which the invading group took control.

Since then, human rights organizations grouped together have made observation visits to document the events in Caravana. In March, the Fray Bartolomé de las Casas Human Rights Center set up the Civil Observation Brigades (BriCO) program.

In the reports of these caravans and brigades, organizations detail that they verified the actions carried out by the invading group, such as destroying vegetables, cutting hoses that supplied water in different areas of the community, burning the paddock, cutting fruit trees, breaking the water pipe several times, destroying the garden of medicinal plants.

The organizations claim that the presence of the group “Los 40” invaders “has made it difficult for six families to plant crops. In addition, the women suffer harassment and face vulnerabilities in their daily activities. They document that the violence intensified as of February 1, 2021.

This group of invaders installed two guard posts 50 meters -less than 100 paces- from the center of the Zapatista community, and three more at 250 meters. According to BriCO’s documentation, those who stand guard there carry machetes, knives, knives, slingshots, pointed batons, cell phones, communication radios and binoculars.

The organizations insist in a press conference that this is a strategy of attrition and an attempt to break the process of autonomy that the EZLN is building. Due to the harassment and the siege maintained by the invaders, they have not been able to carry out sowing of corn and beans that the Zapatista families had scheduled for February.

Human rights defenders claim that this group, made up of people from the ejidos San Gregorio Las Casas, San Andrés Puerto Rico, Ranchería Duraznal, and Rancho Alegre, are threatening the physical and mental health of the Zapatista support bases that live there. Also against their right to food. They also identified new mechanisms of violence.

The consequence of this, the organizations decry, is the “conversion of common territory into private property. Invading, fencing and parceling the recovered land to cause terror and despair as they transform all the vital-elemental spaces for the reproduction of communal and autonomous life into exclusive spaces of private property where the relationship with Mother Nature changes to using it as a commodity.”

“We emphasize the counterinsurgent actions (mechanisms of violence) deployed by the group of invaders who are constantly threatening and provoking the families of the Zapatista autonomous community Nuevo San Gregorio. Actions that come, either by agreement or omission, hand in hand with the policies of the three levels of bad government: Federal, State and Municipal,” the organizations state in their latest report.

It should be noted that in the last year, Frayba has documented that members of the Regional Organization of Coffee Growers of Ocosingo (ORCAO) have attacked with gunfire, burned warehouses and harassed the community of Moisés Gandhi of the same Autonomous Municipality: Lucio Cabañas, of Caracol 10 Patria Nueva.

But Pedro is happy that a delegation of supportive people visited Nuevo San Gregorio in May 2021 and videotaped the denunciations of his companions. Thanks to this he does not feel sad. He calls for the resumption of the Human Rights Observation Brigades because he feels more and more harassment.

“As long as we are not allowed to work the land, we are looking for alternatives on how to improve. There was talk of pottery. Just this handful of land that we are working, when we do it, we are watched (by the invaders) for what we are doing. But thank God other things have kept us afloat, such as organization,” says Pedro.

Autonomy as a way out of fear

“We had a big party, just like we wanted, because we are showing them that we are happy. They (the invaders) have said they want to bomb this house, that they want to set fire to it. Let them do it. We are not afraid. We have done nothing wrong. We seek life. While we are in search of life, we feel we are innocent. They are looking for ways to provoke us. But thanks to our resistance and struggle, we have not fallen into their provocations.”

Pedro states that the recent celebration of the community of Nuevo San Gregorio is part of the strength they have acquired in these times of attacks by the invading group. The party was organized by all the families who participate in the defense of the land, and who demand that this invading group return the 145 hectares stolen from them.

During this time, the community has focused on building and strengthening the organization through collective work in the carpentry shop, the clinic, the school, the store, and the church.

They already have the women’s collective “Tejiendo Vida y Resistencia (Weaving Life and Resistance)”, where the women meet to make their embroidery and weavings to later sell them. They have also set up the Autonomous School “Los Niños Mayas”, where they have already started planning classes and activities with children.

In the Autonomous Health Center “Floreciendo Vida Sana (Healthy Life Blossoming)” they already have several shelves of medicinal plants that they have collected and planted over time. With the method of the Participatory Community Mural, they painted “La Casa de Todos” (Everyone’s House) dedicated to what they dream of with the delegations in the global voyage.

With community work, the Zapatista families have built the necessary structures to carry out these activities. With the sale of their carpentry or embroidery creations they have been able to obtain profits to continue building these spaces in the hectares where the invading group keeps them fenced in.

“The land belongs to everyone. It belongs to the organization. The land belongs to those who work it. But to those who only want to turn it into a business, in the end there is no business. It is the fruit from the blood of the fallen comrades in 1994. We will not forget it, nor betray it. We will defend it. Even if they kill us. We won’t let ourselves [forget it]. Because we know that we are defending life,” Pedro affirms in the interview. 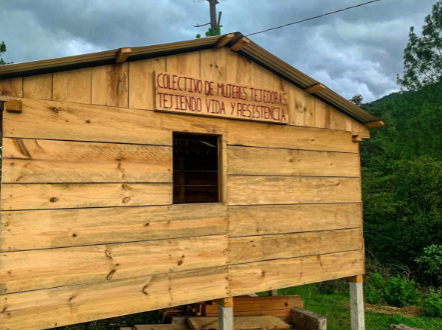 Above: In this workshop the women gather to embroider. Photo Sexta Grietas del Norte

*The names of these people are changed to protect their identity in the face of intimidation.

← Land & Freedom 2021! Solidarity with the Zapatistas’ Tour for Life
Frayba: A Joint Pronouncement: Mexican Government is negligent and permissive of violence toward the indigenous peoples of Chiapas →