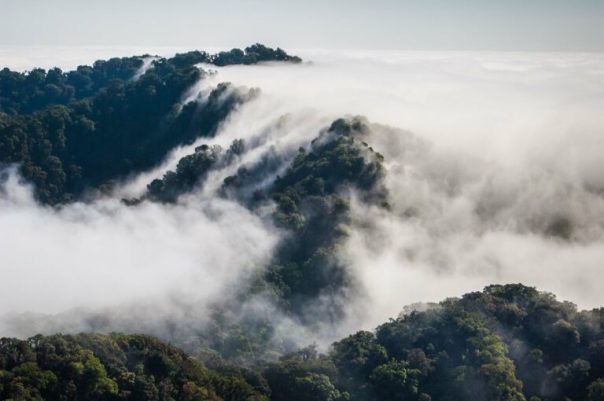 Daniel Pineda Vera, a biologist, said that the humid mountain jungle, is today considered as “the world’s most magical forest,” and can be seen inside the El Triunfo Biosphere Reserve in Chiapas; in it are emblematic species for the conservation and preservation of natural ecosystems, such as the peacock, quetzal, tapir, jaguar, as well as for its scenic beauty.

He emphasized that the place is a paradise for birds and plants. The species that characterize it are the peacock and the quetzal, this latter one has a distribution in all the humid mountainous regions of Chiapas, although its numbers have been reduced. 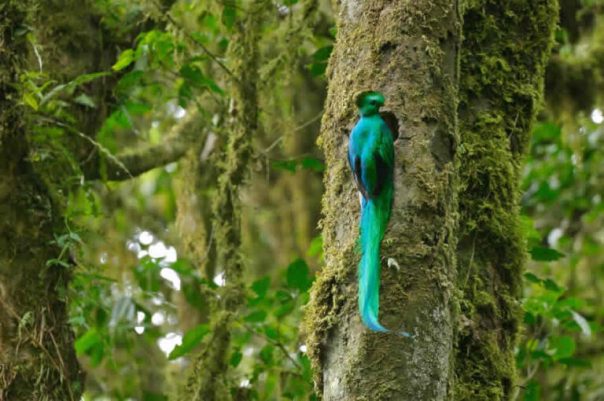 The largest representatives of El Triunfo fauna are tapirs, ocelots, peacocks, jaguars and quetzals (above), the latter two protected to prevent their extinction. Courtesy: Turimexico

We find the peacock, which is a bird typical of the Sierra Madre of Chiapas and the contiguous sierra in Guatemala. We find other species that go unnoticed and that are equally charismatic, such as the clorofonia (bird), according to the specialist.

El Triunfo has the ideal conditions for the development of epiphytic plants (plants that grow over plants) like orchids, bromeliads, ferns, hemi epiphytic plants, which come into contact with the soil and earth, but gradually become epiphytic, or they can remain on the surface, as is the case of araceae (Arums), monster (Swiss cheese plant), hanging telephones and philodendrons.

Pineda Vera said that cloud forests like many other ecosystems and kinds of vegetation in Chiapas are being threatened by multiple factors, but the extractive megaprojects are harmful, especially open sky mining.

Institutions like the Mexican Geological Service and the Secretary of Environment and Natural Resources (Semarnat) opened the door to a lot of concessions to foreign countries like France, Germany, China and Canada so that they can explore, extract and take advantage of the natural mineral and metal resources inside this Reserve. 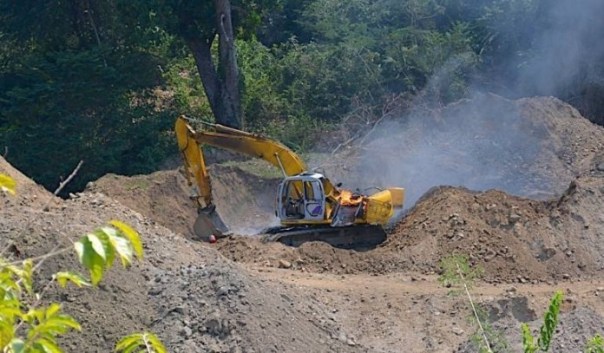 [Above photo] Mining projects in Acacoyagua, Escuintla and Acapetahua municipalities are putting the El Triunfo Reserve and the La Encrucijada mangroves at risk. Courtesy: Gabriela Coutiño

He pointed out that this situation not only devastates the vegetation, but also leaves the soil sterile, due to the use of a variety of chemical products for purifying the minerals and metals, which produce a large quantity of liquid waste as a result of these industrial processes that end up in bodies of water, thus provoking serious pollution. In Acacoyagua municipality the number of cancer cases in the population has increased due to pollution of the rivers from these liquid wastes that the mining companies produce; they also affect the flora and fauna.

These mining concessions far from bringing prosperity and wellbeing, as the politicians usually sell it, are affecting all the social and ecological links that may exist in the zone, fortunately there have been some efforts in the area, but in an effective and tangible way there has been no stop to that kind of mega-project, Pineda Vera said.

Another threat is the construction of highways that seek to cross and divide the Sierra Madre of Chiapas, like many other zones of the state. Consequently, they put the connectedness and health of the ecosystems at stake.

He pointed out that in the cloud forests there is a diversity of plants and trees that dominate the canopy, a mixture of tropical species from temperate zones, where oaks, pines, strangler figs, and a large number of important species can be found.

These species can reach up to 40 metros in height, but due to environmental conditions, the inclination of the relieve, amount of humidity, and soil quality, will make the height of the canopy varied.

At the same time, the area is usually threatened, due to the fact that the traditional cultivation of high-quality shade coffee is carried out there, which has made it famous, but due to industrial pressure and las “Machiavellian intentions” of large companies like Nestlé and Starbucks, producers in search of economic wellbeing, changed their production model.

The new model adopted is café de sol (sun coffee); it implies that the producers cut down the remnant of forest that these lands have, which over time can cause effects. It’s not only a lesser quality of coffee, but there is also a loss of vegetation cover, which gives rise to diseases, suffering and plagues that then cause an abuse of agro-chemicals that contaminate the water and soil.