The 7 Zapatista delegates arrive in The Azores, Portugal, aboard La Montaña 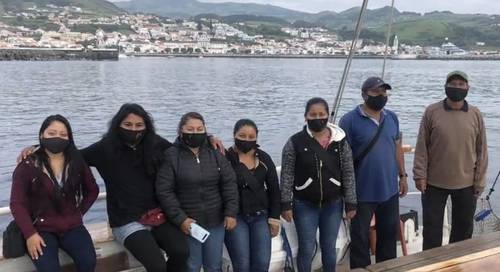 At 8:23 a.m., the port captain’s boat picked up the crew of La Montaña, reported Subcomandante Galeano. Photo: Screenshot of the video disseminated through Zapatista networks

“It would be 2:30:45 on June 11 when the view, a stone’s throw away from the shores of the port of Horta dampened the eyes of the ship and it crew. In the mountains of the Azores it was 7:3 in the morning of this day. It would be 3:45:13 when a speedboat from the Horta port authority approached La Montaña to indicate where it was to anchor. It was 4:15:33 when the ship anchored in front of the other mountains,” he explained.

At 8:23 a.m., the port captain’s boat picked up the crew of the boat named La Montaña –which departed on May 2 from Isla Mujeres, Quintana Roo– and took them ashore to get Covid-19 tests; afterwards, they returned to await the results. “At all times the ‘Maritime Authority’ at the port of Horta, has comported itself with kindness and respect,” he said.

The Subcomandante announced that María Secco, independent film-photographer; Diego Enrique Osorno, independent reporter, and Javier Elorriaga are also traveling as the support team with Squadron 421, made up of the seven Zapatista delegates, “to document the journey.”

He stated that according to their uses and customs, these three individuals had to, besides covering their expenses, present written authorization from “their families, partners and offspring.”

“Both letters were delivered to Subcomandante Insurgente Moisés. Husbands, wives, mothers, sons and daughters wrote and signed the authorizations with their own hand. I had to read them. There was everything, from philosophical reflections to children’s drawings, to a girl’s attentive request to bring her a whale.”

He commented that when the news of the ship’s arrival in Portugal became known in the mountains of the Mexican southeast, “the Zapatista communities sent a message to the crew of the Stahlratte via its captain: ‘Thank you, you’re chingones!” They are still trying to translate that into German.”

He added that it was “at 22:10:15 hours on June 10 when, amid the mists of the European dawn, from the top of the La Montaña lookout, it was possible to see the sister mountain, Cabeço Gordo, on the island of Faial on the Azores archipelago, an autonomous region of the geography called Portugal, in Europe.”

One Comment on “The 7 Zapatista delegates arrive in The Azores, Portugal, aboard La Montaña”