Posted on May 3, 2021 by Chiapas Support Committee 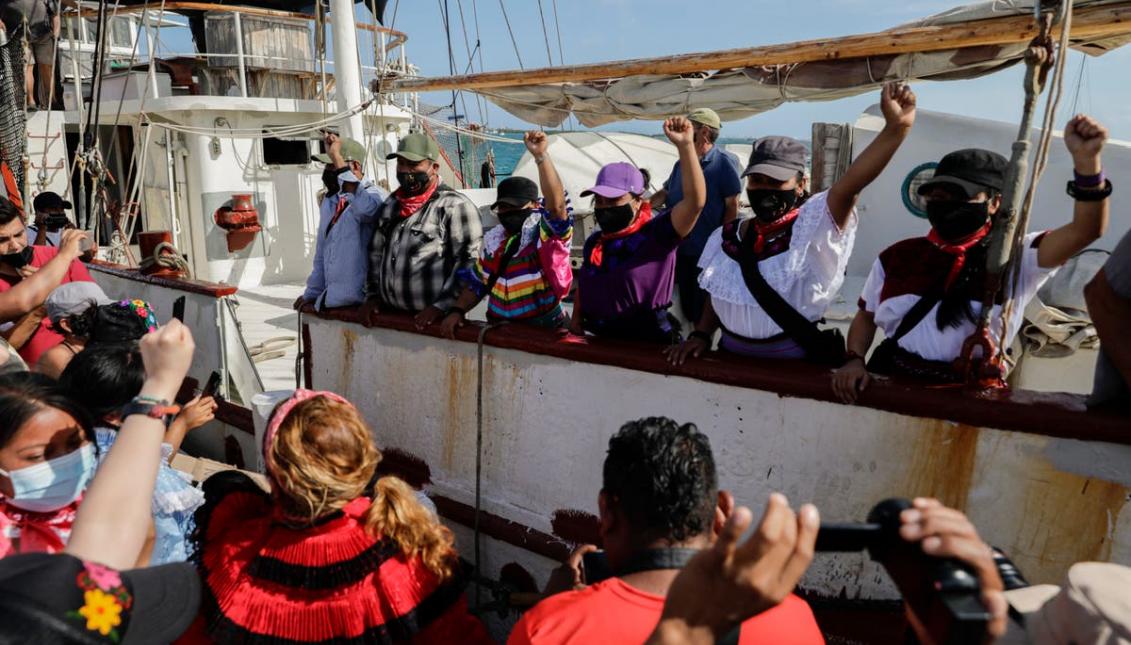 The departure of the ship with a German flag yesterday raised great expectation in Isla Mujeres. Photo: Víctor Camacho

The Zapatista delegation named the 421st Squadron, made up of four women, two men and one non-binary person (unoa otroa), set sail on Sunday afternoon for Europa, a day ahead of schedule, apparently because bad weather is forecast.

The group left at 4 p.m. from the Isle of Women (Isla Mujeres), Quintana Roo, in La Montaña (The Mountain), the ship that will take them to the old continent, where they will visit at least 30 countries.

“We are following the route taken 500 years ago; in this case to sow life, not like 500 years ago, which is the opposite,” said Subcomandante Moisés, who accompanied the group from Chiapas.

In a collective interview, he added that: “you have to organize, you have to prepare, you have to defend, but together in the countryside and in the city, because what we eat comes from Mother Earth; although they are in the city, in 30 or 40 floors, we live on air, oxygen, water to drink, food for everyone and Mother Earth gives us that and whoever doesn’t fight for life is lost.”\

The Zapatista National Liberation Army (Ejército Zapatista de Liberación Nacional, EZLN) had reported in recent days that the sailboat would leave on May 3, the day of the Cross, “to cross the Atlantic on a journey that has a lot of challenges and no reproach, and in the sixth month of the calendar it will be in sight of the coasts of the port of Vigo (Ciudad Olívica), Pontevedra, in the autonomous community of Galicia, Spanish State.”

However, since April 30 there were rumors that they might move up the departure date; on Saturday, May 1st, the ship’s captain commented to some members of the group that accompanied the Zapatista delegation to Isla Mujeres that it was possible that they wouldn’t leave on the 3rd, but rather on May 2, due to the forecast of bad weather.

Javier Elorriaga, one of the Zapatista collaborators who were in Isla Mujeres, communicated messages by telephone on Saturday to some reporters: “We leave tomorrow. We’ll advise you.” Yesterday afternoon, reporters were notified that the boat would leave shortly thereafter.

Before departing, a commission from the National Indigenous Congress that arrived from Mexico City, as well as the rest of the people who accompanied it from Chiapas, bid farewell to the EZLN representation.

The delegation departed amid the scandal and even amazement of hundreds of tourists, many from the United States, who were getting on and off boats that arrived or left from the docks where La Montaña was anchored, while they ate or drank something in the restaurants located in the area.

Once the sailboat, which Elorriaga boarded, set sail, Moisés returned by ferry, together with the rest of his companions, presumably to return to Chiapas, where the delegation left on April 26.

According to the EZLN, “the trip is supposed to take from six to eight weeks and it’s estimated that they will be off the European Coasts in the second half of June.”

Originally Published in Spanish by La Jornada on May 3, 2021 and Re-Published with English interpretation by the Chiapas Support Committee