They denounce ecocide in Chiapas at climate summit in the US 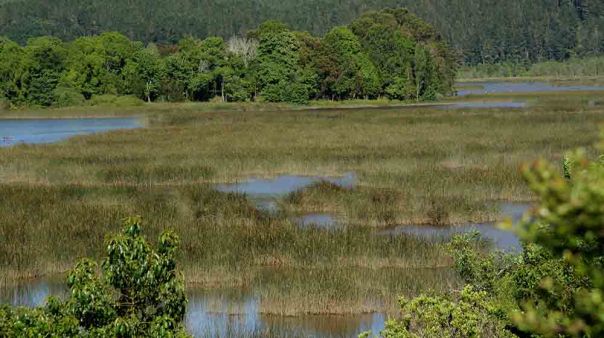 The Jovel Valley Environmental Network and the General Council of Colonias of the South and the Wetlands of San Cristóbal de Las Casas, Chiapas, sent a denunciation to the climate summit convened by the President of the United States, Joe Biden, about “the grave situation in which the mountain wetlands are found” in this city, because “urbanization and the development of subdivisions are allowed in zones where the natural springs from which the population is supplied are born.”

The groups pointed out in a statement that in the wetlands of María Eugenia Mountain, in San Cristóbal, “there are more than 10 endemic species and that is their only space to live.” They added that: “among the most outstanding species are the popoyote fish and the spatula duck, which moves from north to south on the continent and lives mainly in mountain wetlands.”

They stated that: “with urbanization the habitat of this trinational bird, which travels through Canada, the United States and Mexico, is placed at risk.”

Mountain wetlands, in danger of extinction

The Jovel Valley Environmental Network and the General Council of Colonies of the South and the Wetlands of San Cristóbal de Las Casas, Chiapas affirmed that last Tuesday they sent the corresponding information to the Mexican delegation that participated in the climate summit, which started yesterday and will conclude Friday in Washington, in the context of World Earth Day, which was celebrated yesterday.

“One of the great environmental problems is the loss of biodiversity. We are facing what has been called the sixth extinction, in which the human being is ending the life of the planet,” they pointed out.

They added that: “mountain wetlands, like those being destroyed in San Cristóbal, are unique ecosystems that are at grave risk of being lost.”

They assured that with the information sent to the summit they seek to “draw the attention of the three levels of government, which have been remiss and permissive faced with the destruction of the wetlands and for allowing flag species of international category (five of them included in the catalogue of the International Union for Conservation of Nature) are at risk if disappearing.” Members of the two organizations held a public event in the center of San Cristóbal on Thursday to reiterate their call to defend the María Eugenia mountain wetlands. [1]

[1] In previous protests, these two organizations have pointed out that 70% of the San Cristóbal water supply comes from the María Eugenia mountain wetlands, which also play an important role in flood control.

Originally Published in Spanish by La Jornada on Friday, April 23, 2021 and Re-Published with English interpretation by the Chiapas Support Committee

← The Yellow Vests will host the Zapatistas
A meeting of leaders or of movements? →