The social commitment and ethical congruence of Pablo González Casanova 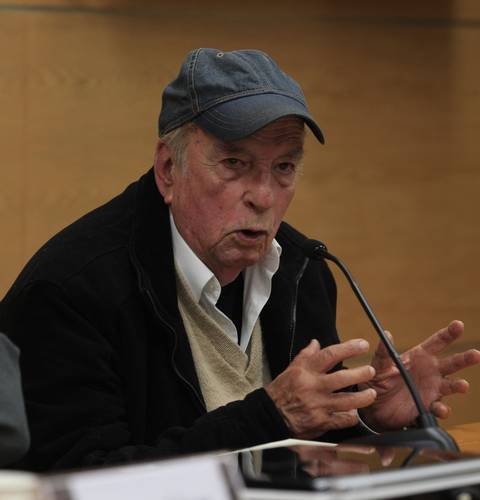 On February 11, Pablo González Casanova, the most renowned and recognized intellectual in contemporary Mexico, celebrated 99 years of a life full of contributions to critical thinking about a social science committed to the oppressed and exploited, indigenous peoples and socialism.

In a few brief autobiographical strokes, González Casanova recalls the formative roots that marked the guiding lines of his action and thinking: a father who wills his son his spirit of rebellion, socialist ideas, ideological pluralism, respect for the religious beliefs of others and the intellectual option; a mother who taught order and discipline, punctuality and domestic work as also the task of men, the art of living and resolving concrete problems, a taste for languages and strengthening of the will.

The teachers and courses left “a good legacy of a jurist apprentice and bachelor with important reinforcement in national history.” The decisive influence the teachers at The College of Mexico (El Colegio de México), most who came from republican Spain, and who taught “to work, to think, to investigate what we don’t know, and to write what we were sure of, ready to discover errors, after having made efforts to eliminate them.”

There was the influence of his best friend in those years, the Cuban Martí-Communist Julio Le Riverend, from whom he learned to be tolerant of those who don’t think like him, including conservatives and the bourgeoisie. The lessons of life as a graduate student in France with Fernand Braudel: the theaters, museums, the art of conversation peppered with humor, wit, and references to the day’s readings. It was in Paris where he studied philosophy, sociology and Marxism. In Marxism, he became interested in Gramsci, whose complete works Vicente Lombardo Toledano gifted him.

“I believe –writes don Pablo– that the free and fair way of thinking that my father left me was reinforced with the magnificent philosophy of Gramsci, and the patriotic sense that my elementary school teachers, and the entire Mexican school system, combined with the encounter with communism –that I met through Le Riverend and through a streetcar friend called Suárez– and with the Marxist Leninist nationalism the official Mexican style, in which Lombardo was a teacher.”

On a scale closer to the political struggle –Casanova pointes out– “with La democracia en México (Democracy in Mexico), I initiated an exploration of freedom, participation in government and the State, the problem of national and state sovereignty, and the necessary confluence in the project of those who think or thought with empiricist or Marxist philosophies.”

In “The Zapatista Caracols: networks of resistance and autonomy (interpretation essay)”, Pablo González Casanova affirms that the Zapatista movement has given rich contributions to the construction of an alternative. The idea of creating organizations that are a tool of objectives and values to be achieved and to make autonomy and “govern obeying” not remain in the world of abstract concepts or incoherent words. This power project is not constructed under the logic of “State power” that imprisoned previous revolutionary or reformist positions, leaving the main protagonist abysmally ignorant of autonomy, be it the working class, the nation or the citizen. Nor is it constructed with the logic of creating an “acratic” society where no one holds power, the logic that prevailed in anarchist and libertarian positions (and that subsists in unhappy expressions as “anti-power,” which not even its authors know what it means), but which is renewed with the concepts of self-government of civil society “empowered” with a participatory democracy, which knows how to represent and knows how to control its representatives in whatever is necessary to respect “agreements.”

The project of the Caracoles is a project of peoples-government that they articulate among themselves and that seeks to impose paths of peace, as much as possible, without morally or materially disarming the peoples-government, less in moments and regions where the State and local oligarchy’s repressive organs, with their varied systems of cooptation and repression are following increasingly aggressive, cruel and foolish patterns of the neoliberalism of war that includes hunger, unhealthiness and the “obliged ignorance” of the immense majority of the peoples, either to weaken them, decimate them or even to destroy them if it’s necessary, when the systems of intimidation, cooptation and corruption of leaders and masses fail.

← “For Life, Against Megaprojects, and in Honor of Our Brother Samir Flores”
Samir Flores: The Wound of Amilcingo →