The war of attrition against the Zapatista communities 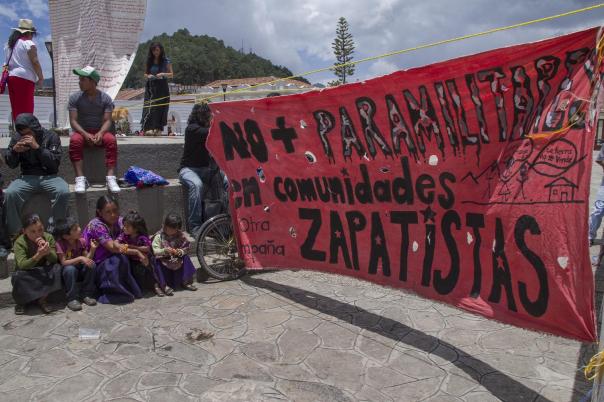 The strategy of the Andrés Manuel López Obrador Government is completed with the installation of new camps and National Guard bases in the Ocosingo region, which goes hand in hand with the reactivation of armed groups such as the ORCAO that act as paramilitaries.

“We are not owners of the land, we are its guardians. The land is for living, not for doing business,” says a young man from Nuevo San Gregorio community, Lucio Cabañas Autonomous Municipality, Caracol 10, in the official municipality of Ocosingo, Chiapas.

“We are enclosed in our own land,” adds a woman from the same community who is being besieged by 40 armed invaders with support from the Government. She explains that despite the fence siege, the families have mounted a carpentry workshop, and they make embroidery and mecapal [1] as a form of resistance.

Those are testimonies collected by the “Solidarity Caravan,” made up of more than 15 collectives adhered to the Sixth Declaration of the Lacandón Jungle, while in Nuevo San Gregorio community as well in the five communities that make up the Moisés Gandhi region, which is in the Lucio Cabañas Autonomous Municipality, in the official municipality of Ocosingo.

Members of the Ajmaq Network of Resistance and Rebellion explain to us from San Cristóbal de Las Casas that it’s about more than 600 hectares that were recuperated by the Zapatista bases during the 1994 offensive and that are now being surrounded by “medium-sized property owners and people allied with the federal government, as well as the state of Chiapas government” and by members of the Regional Organization of Ocosingo Coffee Growers (ORCAO).

In Moisés Gandhi, inhabited by hundreds of families, the attacks began on April 23, 2019, with shots from high-caliber weapons from 5 am to 9 pm, a situation that the Government doesn’t want nor has the will to stop. Ever since the attacks began, in April 2019, groups of 250 to 300 armed people arrived in vehicles on various occasions, burning houses, stealing and destroying crops. On several occasions they have kidnapped comuneros (community members), beaten them, threatened them and then released them.

On August 22, 2020, they burned a Zapatista coffee warehouse at the Cuxuljá Crossroads, a strategic highway crossing that connects to San Cristóbal and Palenque.

Were dealing with new forms of counterinsurgency that are adapting to the growth and territorial expansion of the Zapatista National Liberation Army (Ejército Zapatista de Liberación Nacional, EZLN), which now has 43 centers of resistance. Members of the caravan explain that the ORCAO’s members are politicized people who know the Zapatista movement well.

For years they have been attracted to the social programs that offer them economic resources if they regularize the land; they can then capitalize and go from being poor campesinos to rich campesinos, acquiring power. The ORCAO sells its coffee to large companies linked to Wall Mart, since it has aspirations to make big profits.

“The form of operating consists of enclosing the homes, clinics and schools of Zapatista families and communities, thereby preventing them from continuing to produce, configuring a comprehensive war of attrition [2] that seeks to break the autonomous economy,” members of the Ajmaq and the solidarity caravans explain.

It’s impossible not to connect this situation with what were the social policies of the progressive governments in South America. They not only transferred resources to poor neighborhoods and communities, they also sought that the intermediaries were popular organizations and movements that previously had struggled against the neoliberal governments. In that way, they incorporated people who had in-depth knowledge of the movements, knowledge that the States were unaware of, into official policies.

“We don’t give up here, we continue organizing our collective work,” the communities assure. In order to maintain the resistance, they organize collective work, to ensure food and health. The decision to resist peacefully, without violence but without abandoning the struggle, has enormous costs that the Zapatista bases are willing to face.

“It’s not a coincidence that the ORCAO is attacking the new Zapatista Good Government Juntas and centers of resistance, because the majority there are young people and women and they seek to discourage and frighten them,” say members of the caravans. 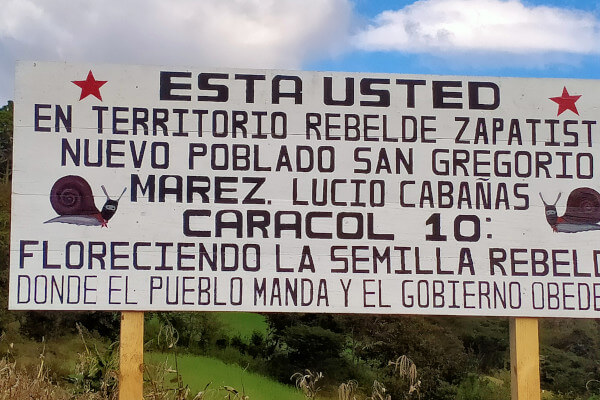 For this reason, in addition to fencing community lands with wire, they break water pipes, surround natural springs, pastures where cattle feed and prevent them from harvesting. In Nuevo San Gregorio, the Zapatista support bases recognize that this year they could barely harvest 50% of what they harvested last year. The objective is to create a humanitarian crisis that forces the Zapatista families to abandon the lands that they recuperated by struggling.

The strategy of the Andrés Manuel López Obrador Government is completed with the installation of new National Guard camps and bases on the Ocosingo region, which goes hand in hand with the reactivation of armed groups like the ORCAO that act like paramilitaries.

“We don’t surrender, we continue organizing our collective work here,” the communities say. In order to maintain the resistance they organize collective work to ensure food and health. The decision to resist peacefully, without violence but without abandoning the struggle, has enormous costs that the Zapatista bases are willing to face.

From above they seek confrontation between peoples, supporting social organizations that have the complicity of the municipal, state and federal governments, for the purpose of undermining the Zapatista autonomy that is one of the principal hopes that illuminates the planet.

[1] Mecapal is a strap attached at both ends to a sack and placed on the head to carry a load. The English word is tumpline. For those familiar with Chiapas and/or Guatemala, it’s used for carrying firewood.

[2] War of attrition – this is also known as a “low-intensity” war, or a war of exhaustion (from wear and tear).

← Background: The three gazes of the original peoples
The San Andrés Accords, autonomy vs. neo-indigenism →