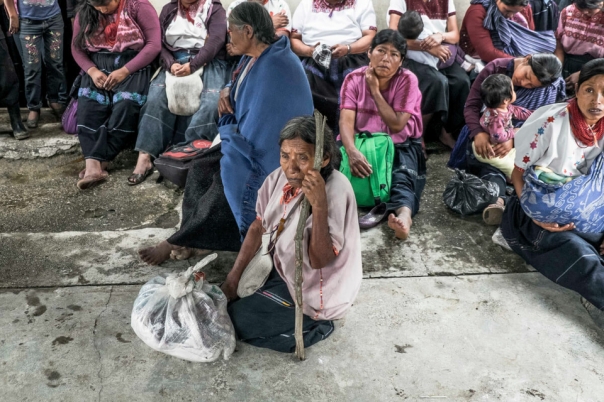 A camp of displaced persons from Aldama.

Tsotsiles: They hunt us at our jobs, on the roads and attack us in our homes

Just last September there were six injured with firearms in Aldama, Chiapas, denounce the residents of Magdalena Aldama who introduce themselves as “the voice of the people” and have given a timely follow-up on the escalation of violence that affects the communities of this Tzotzil municipality. On September 4, Mario Pérez Gutiérrez, 22, and Juan Pérez Gutiérrez, 27, were injured by the fire that that systematically comes from Santa Martha, Chenalhó.

On September 12, Andrés Ruiz Santiz, 61, was injured and on September 13 Raymundo Pérez Santiz, 16, suffered injuries, as did Armando Pérez, 31. On September 30, paramilitary bullets hit Artemio Pérez Pérez in both lungs; he remains hospitalized. The three men were wounded at the attack point of El Volcán and three at T’elemax, Santa Martha, Chenalhó.

So far in October, the Tsotsil campesinos add, “the armed attacks from these paramilitary groups have intensified day and night; they hunt us at our jobs, on the roads, and they attacks us in our own homes and want to kill us casas. As a consequence of this, intermittent displacements have resulted. In other words, they not only dispossess us of our Mother Earth, on which we live and which ancestrally our grandparents have left us and which has been ratified at the Tribunal Unitary Agrarian Court.” Previous and current governments, they add, “have been negotiating our lands.”

For its part, the Fray Bartolomé de Las Casas Human Rights Center (Frayba) warned “about the scenario of a violence of great magnitude and that a massacre like that of Acteal can occur, and, therefore, in fact, difficult or impossible to repair.” According to the Frayba, “the persistent omission and complicity of the Chiapas government and of the federal government causes the escalation of violence in the Highlands region and increases the risk to life of the population in 13 communities in Aldama municipality, mostly women, children, adolescents and elderly people.”

Consequently, it demands that the authorities investigate and punish“ the responsible authorities for the impunity of these events, as well as the intellectual authors.”

Yesterday morning, Magdalena residents expressed: “We denounce once again these paramilitary-style armed groups in Santa Martha Chenalhó that operate freely in that area of the Chiapas Highlands.

“We are an internal forcibly displaced people who have suffered for several years, who now live under armed attack from paramilitary groups in Santa Martha, Chenalhó municipality, where the Chenalhó paramilitaries have always been operating and remain active as of this date.”

The Magdalena indigenous people lament the Mexican government’s inability to bring about resolution,” faced with an agrarian conflict that has been aggravating the continuous armed attacks. “We have suffered and continue suffering. What happened on October 11 at 9:30 am at the T’elemax point in Santa Martha is an example. They attacked the Tabak community and, as a consequence of that, Hugo Alfredo Pérez Hernández was injured by a high-caliber bullet, when he was coming back from San Andrés Larráinzar.”

It’s not the first time that this has been denounced, they conclude: “The same groups have also attacked the town of Chalchihuitán, and today we ask the government: how many more wounded is it going to take in order to resolve this agrarian conflict? How long must we endure these armed attacks from the paramilitary group in Santa Martha Chenalhó? Now what’s next? What hope do the people of Aldama have?”

← Part Five: The Gaze and the Distance to the Door
A Zapatista mountain on the high seas →