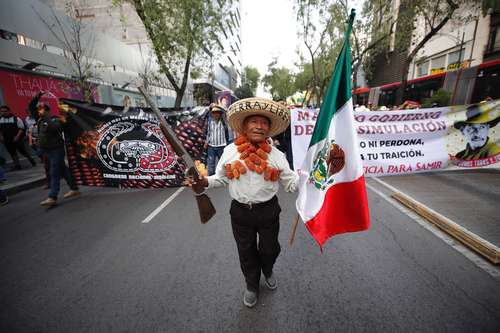 In many corners of “this dying planet” there are those who do not give up. In a written Zoom exercise, to refer to the struggle and death of Samir Flores Soberanes, Subcomandante Insurgente Galeano closes in Morelos the planetary lens of his last communiqué, now that the Zapatista National Liberation Army (Ejército Zapatista de Liberación Nacional, EZLN) announced that it would travel to the five continents. It proposes an approach to Temoac municipality. “Focus now on the Amilcingo community. Do you see that house? It’s the house of a man who in life bore the name of Samir Flores Soberanes. He was murdered in front of that door. His crime? Opposing a megaproject that represents death for the life of the communities to which he belongs.”

He remembers that the Zapatistas said at the beginning of the Uprising: “to live, we die,” because “if we don’t inherit life, that is to say path, then what do we live for?” That is precisely what worried Samir Flores, he emphasizes.

“And that is what can synthesize the struggle of the Peoples Front in Defense of Water and Land of Morelos, Puebla and Tlaxcala, in their resistance and rebellion against the thermoelectric plant and the so-called ‘Morelos Integral Project’. To their demands to stop and disappear a project of death, the bad government responds by arguing that a lot of money would be lost.”

In Morelos “the current confrontation throughout the world is synthesized: money versus life,” he expresses. “In that confrontation, in that war, no honest person should be neutral: either with money, or with life.” And he maintains: “the struggle for life is not an obsession in Native peoples” but rather “a vocation… and collective.”

In its broad text, the Zapatista commander invites the reader to “free yourself, even for a moment, from the tyranny of the social networks that impose not only what to look at and what to talk about, also how to look and how to speak.” By lifting up one’s view “from the immediate to the local to the regional to the national to the global” you will find, yes, “a chaos, a mess, a disorder.” But we also choose what to look at, Galeano points out. It can be at Kurdistan, Palestine, those without papers in Europe or Wallmapu in Chile.Considering “that march, sit-in, migrant camp, that resistance,” it may be that “a comprehensive system” is responsible. “A system that produces and reproduces pain, those who inflict it and on those who suffer it.” But he considers it useless “to ask for forgiveness” from those responsible.

In the fifth communiqué of six (four are missing because, he said, it goes in reverse), the EZLN expands on the reasons for its announced international tour in 2021. It asks: “Who benefits from the destruction, from the depopulation, from the reconstruction, from the repopulation?” And he comes across “diverse corporations” in several countries, “which manufacture not only weapons, but also cars, interstellar rockets, microwave ovens, parcel services, banks, social networks, ‘media content’, clothing, cell phones and computers, footwear, organic and non-organic foods, shipping companies, online sales, trains, heads of government and cabinets, scientific and non-scientific research centers, hotel and restaurant chains, fast food, airlines, thermoelectric plants and, of course, ‘humanitarian’ aid foundations.”

He mentions some current scenarios: the Isle of Lesbos, the Rock of Gibraltar, the English Channel, Naples, the Suchiate River, the Rio Grand, where there are those who “also struggle for life” and conceive it, “inseparably linked to their land, their language, their culture, their way. What the CNI taught us to call ‘territory’, and that is not just a piece of land.”

← Part Six: A Mountain on the High Seas
Part Five: The Gaze and the Distance to the Door →