A view of Tila, Chiapas, Mexico. The church of the Black Christ rises in the background.

For centuries, the Lord of Tila has been venerated with fervor. On the Feasts of Corpus Christi, the Holy Cross, in Holy Week and the miraculous renewal of January 15, thousands of devoted faithful celebrate him. Their devotion to him goes beyond borders. Each year, they travel from Central America, Tabasco, Campeche and Veracruz to worship him.

Tila, the place where the ebony image is found, known as the land of miracles, is simultaneously an ejido, a town and a municipality in the state of Chiapas. Unfortunately, it’s a place of passage not only for religious pilgrimages, but also a route through which undocumented migrants, arms and drugs coming from Central America travel.

Since the end of 1994, northern Chiapas is known not only for being the ceremonial site of the Black Christ, but also for the bloody violence unleashed in its municipalities and communities by the paramilitary group Desarrollo, Paz y Justicia (Development, Peace and Justice). Although the organization born of Solidaridad Campesino-Magisterial (Peasant-Teacher Solidarity) formally split, and gave rise to two different groupings, which they baptized as the Union of Indigenous, Agricultural and Forest Communities (Uciaf, its initials in Spanish) and the Organization of Peasant Agricultural Producers (Opac), they continue acting with official protection as armed civilians. 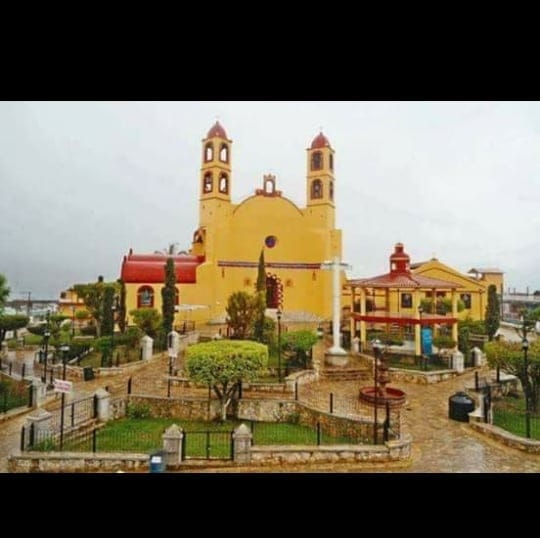 The church of the Black Christ, el Señor de Tila.

Despite the years that have passed since then, attacks on the rebel Chols don’t stop. Just last September 11, paramilitaries attacked a demonstration of Tila ejido owners with firearms. At least two people died.

The conflict is not in essence a problem between poor people or between indigenous people; nor is it a religious or inter-community problem. Its matrix is different. In Tila there is a terrible fiefdom (cacicazgo) [1], linked, among other forces, to the Chiapas family that, with different party initials, governs the state and the counterinsurgency policy against autonomic processes of the Zapatistas and of the peoples who belong to the National Indigenous Congress (Congreso Nacional Indígena, CNI).

The Petalcingo architect and builder Límberg Gregorio Gutiérrez Gómez and his wife, Sandra Luz Cruz Espinosa, originally from Pijijiapan, head the cacicazgo in Tila. With the initials of the Green Ecologist Party of Mexico (PVEM, its initials in Spanish) they have held the municipal presidency, directly or through their family members, without interruption since the 2008-2010 period (https://bit.ly/2ZS7A5K).

Before that date, Límberg –then a member of the Institutional Revolutionary Party (PRI)– served as director Public Works during the mayoralty of Juan José Díaz Solórzano (2005-07), involved with Paz y Justicia. They accused him of using the budget to finance his political campaign for mayor, leaving various projects in bad condition and others unfinished.

He concluded his first period as municipal president with “ranches, registered cattle, quarter horses, residences, luxury vehicles and public transportation concessions for the Salto de Agua-to-Palenque routes.” His wife Sandra replaced him between 2011 and 2012 (https://bit.ly/3mxvw7Y). The Good Government Junta of the Zapatista Caracol That Speaks for All denounced death threats, robberies, damage to private property and dispossessions against the San Patricio community, on the part of paramilitaries of Paz y Justicia and its derivatives.

Límberg was elected mayor again for the period 2012-15, in the midst of accusations of vote buying, fraud and violence (with several injured and one dead among supporters of the Greens and the PRIístas).

For the 2015-18 administration, the architect puts his cousin, Professor Edgar Leopoldo Gómez Gutiérrez, as mayor and his wife Sandra Luz Cruz Espinosa as local deputy, both for the Green Party. Finally, arguing gender parity, the Greens nominated as its candidate Juanita Fabiola Velázquez, who, after winning, asked for an indefinite leave of absence so that her cousin Límberg would become the municipal president, later accused by various communities of robbery (https://bit.ly/2Hc93x2).

To reinforce his dominance, Límberg again became the municipal president of Tila for the period 2018-21. For this, he has the support of builders (he himself is accused of being one), transporters, merchants, ranchers, paramilitaries of Paz y Justicia and its derivatives, the Chiapas family and the forces of order.

The cacique has confronted with everything, paramilitaries and terror included, the Ch’ol ejido owners of Tila, the Zapatista support bases and the pastoral agents that recuperated the Tila ejido, expelled the municipality from its territory on December 16, 2015 and began to govern itself without asking permission.

Besides refusing to enter the Program of Certification of Ejido Rights and Titling of Urban Parcels (Procede), the Tila ejido owners have won, one after the other, the legal battles that they have undertaken in order to return to their hands the 130 hectares of the Legal Fund, which the municipal council has sought to take away from them.

The agrarian controversy in Tila is not only an issue of land; it’s also a dispute to confront the power of the caciques, to stop privatization of the land, reconstitute the Ch’ol people, construct autonomy and resist the counterinsurgency policy.