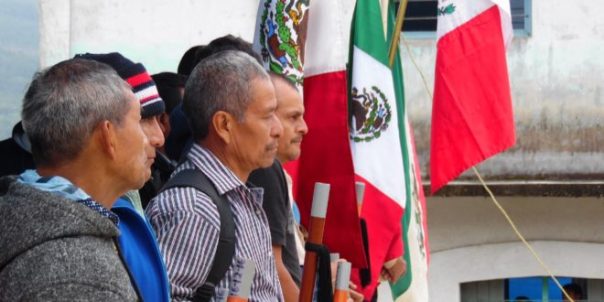 Terror returned to Tila, Chiapas, hand in hand with the resurgence of the paramilitary group named Desarrollo, Paz y Justicia (Development, Peace and Justice). One after another, armed attacks, assassinations, sieges and all kinds of aggressions take place against the 836 ejido owners who reclaimed their territorial rights.

In the Northern Zone of Chiapas, between 1995 and 2000, Paz y Justicia assassinated more than 100 indigenous Chols, expelled at least 2,000 campesinos and their families from their communities, closed 45 Catholic churches, attacked Bishops Samuel Ruiz and Raúl Vera, stole more than 3,000 heads of cattle and raped 30 women. Equipped with high-power weapons, the paramilitaries controlled roads, administered public resources and occupied seats.

The civilian armed group counted on the support of General Mario Renán Castillo, head of the Seventh Military Region. The military spokesperson confessed –according to what Jesús Ramírez Cuevas wrote: “that organization is a pride of the general” (https://bit.ly/3mik0gy). Days before the military man left his position, the leaders of Paz y Justicia said goodbye to him with words of complicit thanks. “We will never forget you, sir. Everything that you did for us requires gratitude,” they told him.

Paz y Justicia was a central actor in the low-intensity war that the government of Ernesto Zedillo orchestrated against the Zapatista National Liberation Army (Ejército Zapatista de Liberación Nacional, EZLN). It sought to territorially control the strategic corridor that connects the Chiapas Cañadas with Tabasco and to derail, by means of violence, the autonomic Chol process.

On July 2, 1997, the Chiapas government agreed to give $4,600,000.00 pesos to Desarrollo, Paz y Justicia, “to promote agro-ecology and productive projects.” Paramilitary leaders, then Governor Julio César Ruiz Ferro and Uriel Jarquín, the state’s undersecretary of Government signed the document. General Mario Renán Castillo signed it as an honorary witness (Masiosare, 21/12/1997).

Beyond its military ties, the initiative to form Paz y Justicia came from the Salto de Agua cattle ranchers associations. It was founded in March 1995. Its political operators were the PRI leaders of Tila. According to a report from the Fray Bartolomé de Las Casas Human Rights Center (Frayba) (https://bit.ly/3mhvTn9), Salto de Agua, Palenque and Playas de Catazajá are, in the Northern Zone of Chiapas, the municipalities in which there are more private properties and in which ejidos and agrarian communities represent the smallest percentage of land ownership.

Its principal leader, now a prisoner but before a PRI deputy, Samuel Sánchez Sánchez, explained that the creation of Paz y Justicia was due to the “radicalization in orientation of those who sympathized with the Zapatistas and the PRD in the ejidos and communities (of Tila, Sabanilla, Salto de Agua and Tumbalá).”

Its members were part of Solidaridad Campesino-Magisterial (Socama), an organization originally formed by parte of the leadership team of Section 7 of the SNTE coming from the Pueblo group, headed by Manuel Hernández, Jacobo Nasar and Pedro Fuentes, and a dissident CNC group led by Germán Jiménez. The group, which took its name from the Polish union Solidarity, was closely linked to campesino struggles in the state. However, it started its pro-government drift as a result of the arrest of its main leaders in 1986. With the arrival of Carlos Salinas to the Presidency it was converted into the replacement for the officialist campesino organizations and, starting with the 1994 Zapatista Uprising, into an incubator of the paramilitary groups (https://bit.ly/3hvViWq).

The reconstitution of the Chols as a people and the construction of their autonomy have a long history behind it. It’s a history that, in its “modern” phase, encompasses the struggle for the end of the mosojüntel (“the time in which we were mozos”), [1] against Kaxlan oppression and that of the large coffee producing companies, the Cardenista agrarian reform that permitted the recuperation of land, the return to campesino production of basics, the formation of an indigenous church, the organization of coffee cooperatives to appropriate the productive process, the Zapatista Uprising, the electoral struggle (1994 and 1995), the re-conquest of the ejidos and the formation of autonomous governments.

At the beginning of the new century, Paz y Justicia temporarily fell out of favor. First, they fought each other over economic resources. Then, some of its leaders were arrested. Nevertheless, they were able to rebuild in the region with the cover of the Green Ecologist Party of Mexico (PVEM).

In fact, those who have attacked the Tila ejido are the former municipal president Arturo Sánchez Sánchez and his son Francisco Arturo Sánchez Martínez, brother and nephew respectively of Samuel Sánchez Sánchez, who remains in prison. Also, the current mayor, Limbert Gutiérrez Gómez, of the PVEM, as well as the regional delegate of Paz y Justicia, and the technical secretary of the Chiapas Institute of Education for Youths and Adults, Óscar Sánchez Alpuche, associated with Ismael Brito Mazariegos, the state’s Secretary of Government (https://bit.ly/3mjT93S).

The reactivation of Paz y Justicia in northern Chiapas and its politics of terror are not an isolated act. Other paramilitary groups have re-emerged in Chenalhó, Chilón, Oxchuc and Ocosingo immediately after the Zapatista announcement of the expansion of their autonomous governments and their rejection of the Maya Train’s construction. The counterinsurgency war continues.

[1] Mozos – Serfs on the large estates of land in Chiapas

One Comment on “Chiapas, the return of Paz y Justicia”