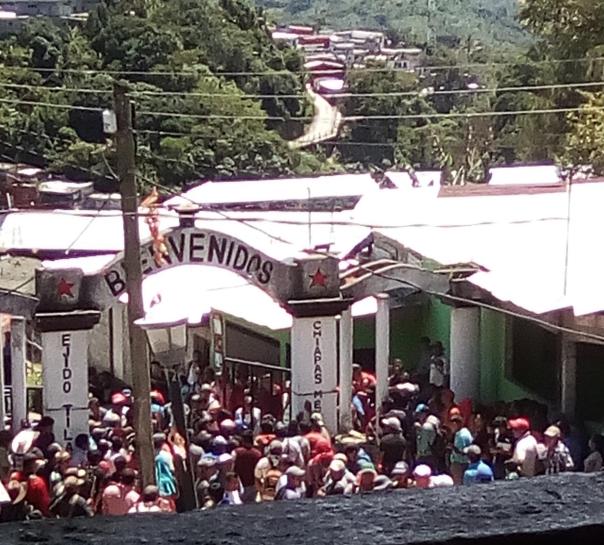 Arch at the entrance to the Tila ejido in Chiapas, Mexico.

By: Hermann Bellinghausen and Elio Henríquez

Violence broke out this Friday in the Chol municipality of Tila, in the northern zone of Chiapas, with at least two dead (other sources talk about three) and an undetermined number of injured. The events were unleashed when an apparently large march was ambushed. In the march were ejido owners from the municipal seat of Tila and sympathizers of neighboring populations that sought to open the fence that followers of the City Council, opposed to the autonomy of the urban and rural Tila ejido, established in mid-August.

Through several blockades on the access road, workers and sympathizers of the City Council and of the Paz y Justicia [1] group prevented the ejido owners from leaving. The first, located at the exit to El Limar, and the last at the first entrance to the urban area. They also requested the presence of the National Guard to evict the ejido owners and re-establish the City Council in the old seat, which has been in El Limar since 2015. In the last two weeks, shootings from these blockades were recurrent to intimidate the ejido owners.

The ejido owners’ march was attacked this morning after liberating the blockade at the site of the hospital on the exit for El Limar and a second blockade at the Tila entrance. According to sources from the general assembly of ejido owners, before the third entrance the march was attacked with shots from a curve by what turned out to be a small group of City Council supporters. The march unexpectedly responded to the shots, a point on which the assembly has not commented. According to the version of those who sympathize with the City Council, the march was what initiated the aggression.

However, the first to fall was one of the marchers. It was his death that inflamed the ejido owners’ march and sparked a confrontation in which the initial aggressors got the worst of it. At the close, the situation is tense.

The events are the new outcome of a legitimacy problem in the Tila ejido, which also served as the seat of the constitutional city hall until the ejido assembly won recognition from the Supreme Court of Justice of the Nation (SCJN) about ownership of the lands in 2015, including the political seat. That has caused various differences among ejido owners of the vast ejido and those who have moved into the urban area but don’t own lands or plots.

Problems of legitimacy in the ejido

The city council, headed for the third time by Limberg Gregorio Gutiérrez, of the PVEM (and his wife held the mayor’s office for another period), is historically supported through the strength of the group formerly known as Paz y Justicia. Francisco Arturo Sánchez, nephew and son of the founders of Paz y Justicia, heads the opposition to the ejido.

Another factor that made the problem tenser was the attempt, on the municipal government’s part, to carry out public works inside the ejido without its authorization.

In a prudent communiqué, the official City Council of Tila reproached “confrontation as a way to resolve differences or demand a solution to social problems,” and called to the groups involved for “prudence in the events that occurred in recent hours.” It referred to the “longstanding agrarian dispute whose solution depends solely on the SCJN,” and committed to respecting indigenous rights and realizing “a policy of conciliation and zero provocation.”

Today, residents of Tila told the La Jornada correspondent: “A group of ejido owners went to remove the blockade and were received with bullets. We have one compañero dead and several injured. The compañero ejido owners defended themselves. That’s what the city council and that damn family of paramilitaries provoke.”

State government sources reported three deaths, although they did not provide names, as well as six injured from bullets who are being cared for in Yajalón and Palenque hospitals and several beaten.

The State’s Attorney General reported that according to the investigation folder, “the events were recorded at approximately 12 noon this Friday at the Tila entrance arch, where residents and autonomous ejido owners attacked each other.” He added that: “a special group from this Prosecutor’s office, made up of police, experts and specialized employees from the Ministerio Pública (district attorney), was sent to the place for the purpose of initiating the investigative work, whose results will be announced in the next few hours.”

The Vicarage for Justice and Peace of the Diocese of San Cristóbal said that: “we are aware that almost three weeks ago a group of Tila ejido residents carried out blockades at the main entrance and at other stretches near the town. We know that there was the intention of a dialogue and negotiation process to seek a solution to the conflict, but apparently the situation got out of control and therefore it is suggested investigating the true causes of the events.”

← Vandalism and the return of Paz y Justicia in the Tila ejido, Chiapas
The paramilitary group Paz y Justicia perpetrated the attack, the autonomous ejido says →