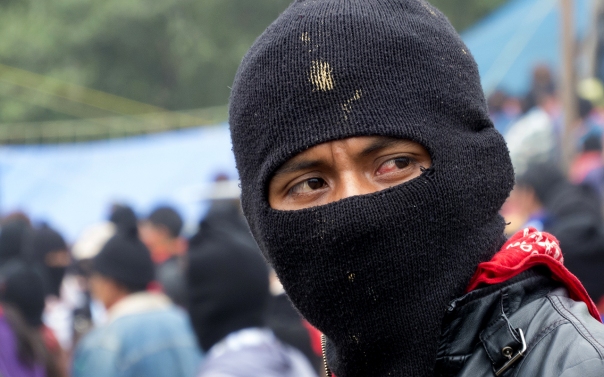 For four years, Aldama residents have lived under constant threat from paramilitary groups that shoot at them and force them to displace. Despite a non-aggression pact promoted by Alejandro Encinas in 2019, the conflict rages. Residents denounce the loss of their crops, abandoned because of the threats

Araceli is three-years old and knows that when she hears a shot she must throw herself on the ground. They taught it to her after the kitchen of her house was shot up. It was January 22, 2019 and her mother, her aunt and her grandmother – all support bases of the Zapatista National Liberation Army (Ejército Zapatista de Liberación Nacional, EZLN) – were making tortillas in front of their hearth, when from the Santa Martha community (Municipality of Chenalhó) came a volley that made holes in the wooden plank walls and destroyed the tin roof. Fortunately, there were no injuries that time.

“Armed groups with a paramilitary cut shoot almost daily, both night and day,” says Gabriel, Araceli’s father and a member of the Yach’il Xojolabal Zapatista coffee cooperative. “We are thinking about building a concrete wall out here, so that if they come to shoot again the bullets can’t enter.”

Everyone in San Pedro Cotzilnam (Aldama), both Zapatista and partisan families, agree: the last week of January 2019 was one of the most violent. It’s a conflict that began in 2016, when Aldama denied Santa Martha residents permission to use a water hole. Tensions between the two municipalities actually date back to the 1970s. The dispute is over 60 hectares (around 148 acres) of forests, milpas and coffee fields, which a Unitary Agrarian Court decision granted to Aldama in 2009.

Since 2016, the Aldama population, which according to the last study on poverty (Coneval, 2015) is the third poorest municipality in Mexico, lives under the constant threat from paramilitary-style armed groups. They fire shots from Santa Martha community, taking advantage of the fact that it lets them be on higher ground than Aldama. They shoot at houses and people, be they Zapatistas or members of political parties. [1] They shoot at cars, although they may transport the injured, and at campesinos while they head out to their fields.

The conflict in Aldama has caused, in total and up to now, 7 deaths, 19 bullet wounds and some 2,000 people that constantly have to “intermittently” displace themselves. In other words, during the shooting they hide in the mountains, in a relative’s house or in shelters, and they return to their homes when calm returns.

Last March 14, they arrested the spokesperson for the Aldama displaced, Cristóbal Sántiz Jiménez, for homicide. Several human rights organizations denounce the existence of legal irregularities and request his release. On the other hand, Santa Martha resident accuse Sántiz Jiménez of being responsible for the 19 murders that occurred in their community.

“What we, as the Fray Bartolomé de Las Casas Human Rights Center (Frayba) have documented, is that of these 19 deaths, 15 were murdered before the more serious conflict started (2016) and with brutal violence, which makes us think that it’s about a settling of scores between criminal groups,” says Pedro Faro, director of Frayba. “We think the other 4 people may have been murdered as a response from Aldama to the attacks from Santa Martha.”

The conflict takes place in a region – the Chiapas Highlands – where in two and a half years paramilitary-style armed groups have displaced more than 7,000 indigenous Maya Tsotsils (including those from Aldama).

Several of the paramilitaries were formed in Chenalhó municipality. In that same municipality in 1997, they massacred 45 people, in the Acteal community chapel.

The Frayba does not point to the existence of a direct connection between the current paramilitary-style armed groups and those that were formed in the 90s after the EZLN Uprising. But it denounces that they released those individuals arrested for the Acteal Massacre. Many of them returned to Chenalhó, and they never confiscated their weapons. Some of the politicians who supported them continue operating in the region.

What’s behind the attacks?

According to the Zapatistas of Aldama, there are interests that go beyond the 60 hectares in dispute, a possible real motive for so much violence. “The people in the Santa Martha armed groups are campesinos, where do they find the money to buy the bullets,” asks Gabriel.

Gabriel is a member of the Yach’il Xojolabal cooperative. He says that some power groups could promote the violence as a pretext for militarizing the region. The January 2019 opening of the Mixed Operation Base (Base de Operaciones Mixtas, BOM) in Cocó, one of the Aldama communities hit hardest by the violence, would demonstrate that.

According to this theory, more than guarantying the population’s security, the military presence would be functional to the entry of extractive companies. In Aldama there are rumors of an interest in extracting its underground mineral resources and in constructing a hydroelectric dam on the river that crosses el valley that divides it from Chenalhó. However, the Mexican Geological Service does not point to the presence of any kind of mineral in the municipality’s soil and the Frayba has not documented any of these activities.

“We have investigated in the federal government’s annual budgets and there is no money dedicated to the construction of projects of this kind,” affirms Jorge Luis López, a member of the Frayba.

In a February 6, 2019 communiqué, the Good Government Junta of Oventic denounced the violence that affects the Zapatista families of Aldama and Santa Martha. It placed responsibility on the three levels of government for not having thoroughly resolved the problem. “Their policy is to distribute money and crumbs, create conflicts and militarize the indigenous communities. They just get accustomed to giving out money to calm the people. And is that not corruption,” the autonomous Zapatista authorities ask.

In June 2019, the federal administration of Andrés Manuel López Obrador promoted de non-aggression pact between Aldama and Santa Martha. He signed in the presence of Assistant Secretary of Governance Alejandro Encinas, who considered it as “the beginning of a new stage of peace and reconciliation.”

However, the shootings began a few days later and in late July 2019 Filiberto Pérez Pérez, a young man from Tabak community (Aldama), was murdered by a sniper during his grandfather’s wake. A bullet struck him in the neck.

Gabriel works in the Yach’il Xojolabal coffee cooperative’s San Cristóbal de Las Casas office, from Monday to Friday. On the weekends he returns to his family and his home in [the town of] Aldama.

When Gabriel returns Araceli, his 3-year old daughter, takes his cell phone and starts watching videos, her mom takes it away from her and tells her that she best go out and play with her neighbors. There have been no recent shootings and that allows them a certain freedom to travel.

According to Gabriel, the violence affected Zapatista families less than the party members because the Zapatistas are organized. EZLN support bases have radio for communicating with each other in case of an emergency and a discipline that requires them to respect the instructions of the autonomous Zapatista authorities. And these instructions are clear: not to respond to the gunfire from Santa Martha, not to yield to the provocations.

“If our authorities tell us not to go out to our plots of land on such a day because it’s dangerous, we don’t go,” says Gabriel. “In many cases this saved us, because the snipers fire at us just as we walk in the direction of the coffee fields.”

In the beginning, the Zapatistas were going to their fields before sunrise and returning after sunset to hide themselves from the armed groups. They carried the coffee on their shoulders in big black sacks (costales) instead of the usual white ones, so as to hide them in the darkness. But in August 2018, a family of 5 was murdered in their car in an ambush. After that, many campesinos decided to abandon the crops in their coffee fields in order to save their lives.

“Do you see it? They were shooting from there,” says Juan, a member of Yach’il Xojolabal, “last year it was impossible to be here, now it’s calmer.” Juan points to a place on the side of the mountain in front of us; we’re in the coffee fields, some two hundred meters away: that’s where the armed groups from Santa Martha are entrenched behind some sandbags.

The violence caused grave economic effects to the 25 Aldama families that are members of the Yach’il Xojolabal coffee cooperative. This cooperative was founded in 2001 and has a total membership of some 700 families from 8 autonomous municipalities of Chiapas.

In 2019, Zapatista coffee growers lost 50 percent of their grains, but this year the losses have been less. Just for the harvest season – between November 2019 and the beginning of March 2020 – there were no shootings in Aldama.

However, because of the shootings last year, the coffee fields didn’t receive the maintenance that they need, and the 2020 harvest for the Zapatistas in Aldama reached only 60-70 percent of what was estimated.

“In any case, the situation in Aldama just partially affects our total production for 2020,” says Yach’il Xojolabal. Of the 8 municipalities where they produce coffee “we harvest around 87 percent of the estimated production and we will have no problem in complying with the contracts that we signed.”

Re-Published in Spanish by Chiapas Paralelo

One Comment on “Zapatista Coffee growers under attack in Chiapas”