One of the EZLN’s founders dies of Covid-19 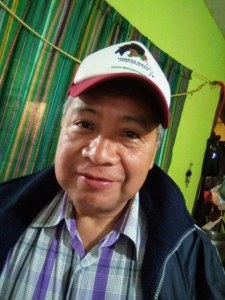 The body of Gómez Álvarez, who spoke Tzotzil, Tzeltal and Chol, was cremated this Saturday in Tuxtla Gutiérrez. Photo: Courtesy of his family

Hidadelfo Gómez Alvarez, (Frank), one of the founders of the Zapatista National Liberation Army (Ejército Zapatista de Liberación Nacional, EZLN) on November 17, 1983, died in this city from Covid-19, his family members reported.

They said that the former insurgent lieutenant, 57, died Saturday afternoon in the Covid-19 clinic installed in the area known as La albarrada, located in southern de San Cristóbal, after being hospitalized for 18 days.

She said that Frank left his community to find work in San Cristóbal when he was 12, and started to participate in political activities when he was between 16 and 17, which led him to form part of the National Liberation Forces (Fuerzas de Liberación Nacional, FLN), which gave origin to the creation of the EZLN.

Some of his friends remember that he was the principal link for the FNL leaders to make contact with the majority of the most important Zapatista political cadres that were formed in the 1980s of the last century.

On November 16, 2004 he told this newspaper how the EZLN was founded in the Lacandón Jungle. “The founders are German, Elisa, Rodolfo, Javier and Frank,” the latter three, indigenous. [1] First, the prior work of exploration was done for a year, with people in communities” located in Ocosingo.

“On November 15, we left from Ocosingo, the municipal capital, at night in three-ton trucks. We slept in Rómulo Calzada, several kilometers from the mountain. The driver returned. We crossed the Jataté River on the 16th as 6 am and ate breakfast in La Sultana, where a contact was already waiting for us,” he said.

And he added: “Then, with the load on horses, we walked slowly, in khaki uniforms and with pistols and rifles kept in sacks. On the way we met people and when they asked us who we were, we would say we were from Pemex (Petróleos Mexicanos), and that we were going to explore deposits in various communities.”

He said that on the 16th they walked all day and they crossed through Lacandón Jungle communities; that day they slept on the outskirts of Laguna Santa Elena. “Up to there we were eight people because three indigenous Chols who live in the San Quintín Canyon (Ocosingo) were with us as guides.”

On the night of the 16th, he continued, they slept between Guadalupe and El Calvario and on the 17th, only the five founders entered the mountain to camp.

“The first camp where we founded the EZLN on November 17, 1983 was called La Garrapata (the Tick). We spent three days there to heal the blisters and for the swelling of our feet to go down and to explore the area so as to reach the Río Negro, which was our guide for entering into the heart of the jungle.”

He stated that their foods were canned, plus pozol, pinole and tostadas. “The first nights we didn’t light a fire so as not to call attention. It rained a lot. Some read war manuals and others chopped (to open a gap).”

He said that later they abandoned La Garrapata and moved on to the Río Negro, located a day’s walk away. Some stayed for several weeks at that site and others, the 3 indigenous, went out to the communities to continue organizing the population, to buy provisions and wait for the arrival of equipment. “A few were focused on military formation and others on the political.”

When war broke out in Chiapas in January 1994, he was in Oaxaca, where he was doing political work. He left the ranks of the EZLN in 1997 due to political differences.

“He devoted all his youth to the movement. And of what use was it later,” commented his compañera, with whom he installed a cafeteria in San Cristóbal years later, which has been maintained to date. Since then he called himself Manuel.

The body of Gómez Álvarez, who spoke Tzotzil, Tzeltal and Chol, was cremated this Saturday in Tuxtla Gutiérrez and his ashes were moved to the place in which the cafeteria that was his property functions, where family members and friends came to participate in traditional prayers and ceremonies.

This Sunday, his remains were taken to Lázaro Cárdenas, his birth community, where his parents le organized prayers and indigenous rituals that are customary in that Tzotzil region. After a few days the urn will return to San Cristóbal de las Casas.

[1] Frank‘s account of five people being the original founders of the EZLN differs from that of Subcomandante Galeano (formerly Marcos), who says there were 6 original founders. Researchers on FLN/EZLN history all document that 6 FLN members entered the Lacandón Jungle on November 17, 1983 to found the EZLN.

← Indigenous in Aldama, Chiapas, between famine and gunfire
Covid-19, the Chiapas mirror →