Federal judge suspends work on Section 1 of the Maya Train 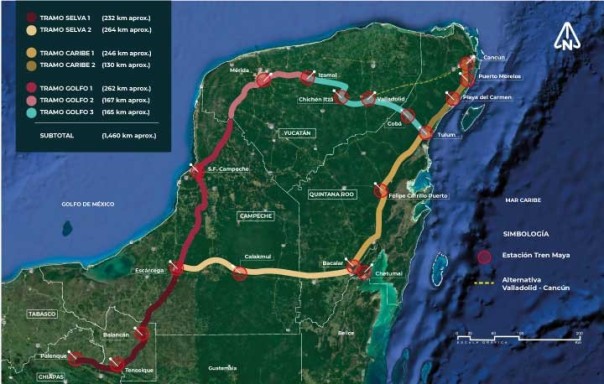 The Maya Train as new infrastructure for connecting the agro-industrial and tourist-real estate capitals on the peninsula. Courtesy: Gasparello and Quintana

A federal judge in Chiapas today granted the definitive suspension to indigenous Ch’ol facing the Maya Train project, for the Palenque-Escárcega section, and therefore the National Fund for Promotion of Tourism will have to stop any work relative to that first section, as long as the pandemic lasts.

The non-governmental organization Indignation, Promotion and Defense of Human Rights A.C (hereafter, Indignation AC), which in legal matters represents diverse indigenous Ch’ol communities in Palenque, Salto de Agua and Ocosingo, announced that with this decision the federal government is ordered to abstain from carrying out acts tending to execute the project called the “Maya Train” on Section 1, which runs from Palenque to Escárcega.

The amparo suit filed before the Second District Judge for Amparo and Federal Criminal Trials in the state of Chiapas was resolved last Monday, June 22, when the court granted a definitive suspension to a group of people belonging to the Ch’ol people from the communities of Palenque, Salto de Agua and Ocosingo municipalities, who found protection against said project.

That civilian body said that on May 7 members of several Ch’ol communities presented a request for amparo against the President of the Republic, the Secretary of Federal Health and the Director General of the National Fund for Promotion of Tourism (FONATUR) because of the issuance of both the Secretary of Health’s April 6 agreement and the April 23rd Decree signed by the President of the Republic.

The continuation of the project called the “Maya Train,” as well as other administration projects, was decided in that agreement, despite the pandemic derived from Covid-19.  Therefore, in the request for amparo they argued violations of their right to health, as well as effects on the environment and to their rights as indigenous communities.

That very same May 7, the Second District Judge for Amparo and Federal Criminal Trials in the state of Chiapas decided to grant the provisional suspension, pointing out, among other things, that continuing with work on the so-called Maya Train put the health of the Ch’ol communities of those municipalities at risk, as well as their rights to a healthy environment.

Next, magistrates of the Collegiate Court in Administrative Matters located in Tuxtla Gutiérrez revoked said provisional suspension, “with the implausible argument that the risk of Covid-19 infection to the Ch’ol Maya community derived from work on the train constituted a future act of uncertain realization.”

However, on June 22, “after having deferred the incidental hearing five times because of FONATUR’s refusal to provide information that the Court requested, the Second District Judge for Amparo and Federal Criminal Trials in the state of Chiapas decided to grant a definitive suspension to members of the Ch’ol communities.”

After this judicial decision, the non-governmental organization Indignation AC said, there is now an obligation both for FONATUR and for the companies that won the bidding on that section “to stop all work corresponding to any work that other than maintenance of the existing tracks, until the amparo lawsuit is not resolved.”

Indignation AC explained in a letter that the judge, in order to justify said suspension, reasoned that members of the “self-recognized indigenous communities, inhabitants of the community where the project called the Maya Train will have impact, specifically in the municipality of Palenque, could suffer an affectation to its legal sphere, concretely in its right to health.”

Since the execution of the Maya Train project currently collides with the national health phenomenon caused by the Covid-19 virus, whose existence and dynamic spread is recognized by the “Agreement establishing extraordinary actions to address the health emergency generated by the SARS-CoV2,” which establishes, among many measures, social distancing of at least one and a half meters, and in which it recognizes that its spread is closely related to social interaction”

The judge pointed out that if the Maya Train project were carried out, the fundamental right to health could be exposed, because “it collides with the right to the health of the complainants -and also with the collective-“ given the prevailing health phenomenon in the country, recognized at the national, state and municipal levels, which constitutes a notorious fact, insofar as the diverse General Agreement of March 31, 2020 recognizes the existence of the pandemic and the need to establish social distancing measures.”

Indignation AC indicated that the definitive suspension has the effect of “stopping any activity relative to the implementation of the project, except that related to maintenance of the tracks, until the amparo lawsuit is definitively resolved.”

It said that this suit for amparo has derived information that shows that the project named the Maya Train “is illegal and lacks legal support, as for example the absence of an environmental impact statement on the project, as well as irregularity in the bidding process, in addition to violations of the rights of the Native peoples.”

For this reason, members of the communities warned that they have decided to expand the demand for amparo (protection and suspension) pointing out these violations, which will oblige the Federal Judicial Power to analyze the essence of the project starting with what said communities claim.

← The anticapitalist left, neither liberal nor conservative
Campaign for Las Abejas: End the Famine →