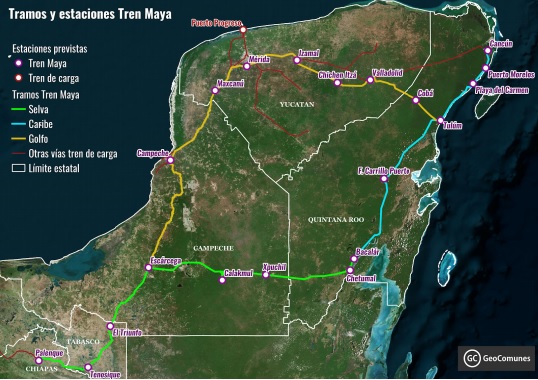 The Maya Train as a new connective infrastructure for the agro-industrial and tourist-real estate capitals on the peninsula. Courtesy: Gasparello and Quintana

*In the months following the election of López Obrador, they announced data on the megaproject promoted from the Executive; it was the subject of a National Consultation on November 24 and 25, 2018. Of the 946, 081 participants, 89.9 % voted in favor of the project, although before said Consultation, the president came forward to affirm that construction of the Maya Train would begin December 16, 2018. A year and a half later, the Master Plan and the executive projects are still not known and no environmental and social impact evaluations have been released.

Giovanna Gasparello, a Doctor of Anthropology who carried out a research investigation that is ongoing, identifies the possible social impacts of the Maya Train megaproject in three indigenous regions: Northern Chiapas, the east of Bacalar in Quintana Roo and the Maya Jungle in Calakmul, Campeche.

The investigation centers on a diagnosis of the current situation in the territory studied, focusing on the situation of inequality and social segregation, the product of neglect of the population’s fundamental rights. As well as the forms of territorial use and productive activities in the zone; dispossession of land and culture; insecurity and violence determined by the criminal economy; the development of tourist activities; organizational processes, social and cultural structures.

Gasparello reminds us that the megaproject is one of the Executive Priority Projects and Programs led by Andrés Manuel López Obrador. It foresees the construction of a 1,525 km-railway line across the states of Chiapas, Tabasco, Campeche, Yucatán and Quintana Roo, and the operation of a train powered by biodiesel to transport both cargo and passengers.

Therefore, according to official documents and declarations, the line will promote the transportation of gasoline and products consumed in the tourist zone called the Riviera Maya in northern Quintana Roo. Additionally, it will detonate tourist development by facilitating access to poorly connected areas and enhancing the connection between different mass tourist attraction sites with others in development.

The focus of the investigation is on social, cultural and economic processes that interest the municipality of Palenque and the regional space in which it is included.

About 40% of the region’s territory is considered natural area, mostly primary and secondary rainforest; bodies of surface water abound, the result of seasonal flooding from the Usumacinta River, creating particular and delicate ecosystems.

In addition, two of them are protected as Ecological Conservation Zones and under the RAMSAR category: the “Catazajá Lake System” and the “La Libertad Wetlands.” The Palenque National Park is located in connection with the archaeological zone; the Agua Azul Cascades Flora and Fauna Protection Area encompass 2,580 hectares of Tumbalá municipality.

Most of the active economic population is occupied with primary activities. The tertiary activities carried out in the city of Palenque are becoming increasingly important. Among the primary activities, livestock dedicated to the production of milk and beef stands out, and Chiapas is the third largest producer of beef nationwide.

The eastern part of the municipality is inhabited to a great extent by indigenous peoples and land tenancy is ejido. The main productive activity is agriculture for self-consumption in the milpa and parcel rotation system.

At the same time, regarding commercial crops, the main crop is corn, followed by African palm, whose oil is used in the food and cosmetics industry, although the justification for promoting this crop is due to the fact that it was related to the possible conversion of the paste into biodiesel.

The National Council for the Evaluation of Public Policies (CONEVAL) revealed in 2010 that 33.5% of the population is in a situation of extreme poverty, which means a high degree of marginalization.

Gasparello finds that the drug trafficking routes show a daily panorama of assaults, kidnappings, femicides, executions and forced displacement, elements of reflection in the analysis of the reality of several states.

Additionally, the routes of the illegal economy, the mafia control of territory and violent acts draw invisible maps. Palenque has the peculiar characteristic of being a geographic border; it is a short distance from the state border with Tabasco and a just a few miles separate it from the southern border with Guatemala.

The migration route from the Petén in Guatemala is the oldest; migrants cross through Marqués de Comillas, Benemérito de las Américas, Palenque and Playas de Catazajá, to climb on and move with The Beast, the cargo train that arrives in Veracruz passing through Tabasco.

Also, the Salvadoran criminal group Mara Salvatrucha was controlling human trafficking in Palenque, charging migrants for access to the roof of the cargo train and controlling the migratory route stretch from Pakal Na to Arriaga, according to the research study.

The migrants that travel through this route are Africans, Arabs, Chinese, Haitians and Cubans. The corruption of the police and immigration agents who extort them is notorious, as is the practice of community members who charge a fee to let them pass through the community.

In 2014, the United Nations Office against Drugs and Crime registered that Chiapas is one of the states most vulnerable to human trafficking, in particular women, for the purpose of sexual exploitation.

Members of the Casa de la Mujer in Palenque report that local women or migrant women come to their offices beaten and tortured, with documents showing the complaint to Mexican legal authorities, with the promise of follow up and justice, which never comes. A constant in these cases is that the aggressor is involved in drug themes.

The author says that kilometer 0 of the megaproject is located in the Pakal Na district, near the Palenque International Airport. The land is federal and that’s why it has been designated as an urban development nucleus projected for the train.

President Andrés Manuel López Obrador headed an official act on December 16, 2018 that he called the “Ritual of the Original Peoples to Mother Earth for the Maya Train’s Consent” and laid the first stone, officially starting the megaproject.

Currently, around 7,000 people live in the district, it develops along the highway and the train tracks. The old central park strip for small planes is located just at the crossroads between the two roads and next to the railroad station, operated by the Isthmus of Tehuantepec Railroad Company.

Those interviewed in Pakal Na said that each house used to have a well, starting with the connection aqueduct’s water network and they denounced problems in the water supply. The drainage network is not connected, no section is connected to the others and all discharge into vacant ground, canyons, streams and onto public roads.”

On the other hand, regarding electricity those interviewed denounce frequent cuts, perhaps due to the low power of the transformers in the face of an increase in consumption, they affirm that the Maya Train engineer promised the remodeling of the supply system for water and electric power. Finally, a good part of the streets are not paved.

Gasparello points out that during the Covid-19 emergency the Nacional Fund for Promotion of Tourism (FONATUR) announced the start of the construction on the first section of the train, which goes from Palenque to Escárcega [Campeche].

In this stage, FONATUR declared, 850 people would be employed in setting up work camps along with the expected number of indirect jobs; it anticipated mobilizing 2,975 people in the middle of phase 3 of the pandemic, “which evidently… increases the risk of accelerated infection in our municipality and thus the probabilities of death,” reads the text of a court filing against this action.

On May 8, 2020 the response to the demand for a suspension filed by members of the indigenous Maya Ch’ol people in the municipalities of Palenque, Salto de Agua and Ocosingo was made public. It pointed out the violation of the rights to health and life that the start of construction work on the megaproject implies.

On November 15, 2019, almost a year after the start of the project, they announced the call for the consultation process with indigenous peoples who are within the project’s area of influence, regarding participation in the implementation of the project, as well as in the just and equitable distribution of the benefits.

The process resulted in approval of the Maya Train; the percentage in favor was 92.3 % of the total of 100, 940 voters; those who voted YES correspond to 2.78 % of the 3,344,522 persons who inhabit the 84 municipalities where the consultation was held. Sources interviewed said that the traditional authorities and the instances of indigenous collective representation were not invited or recognized.

The researchers say that the analysis they carried out evidenced the continuity of the Maya Train project in the region with the project of the Palenque-Agua Azul Integrally Planned Center (CIPP), also directed by FONATUR. This tourist project includes the construction of a complex regional system of infrastructure for connectivity and lodging for the purpose of developing tourist activity in the region and exploiting the economy tied to the sector.

The Maya Train project proposes reactivation of the CIPP, although it has not explicitly been mentioned yet, the study’s author said. The decree authorizing construction of the San Cristóbal-Palenque highway axis makes clear the connection to the railway project.

Lastly, Gasparello states that Chiapas has shown conflicts and violence in the implementation of any megaproject that doesn’t respond to the material and cultural needs of the local population.