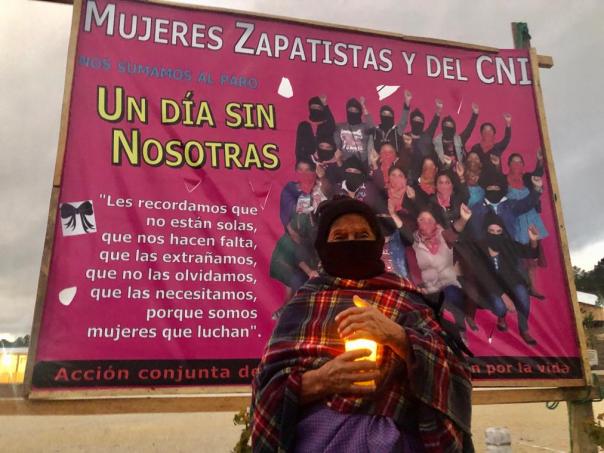 Zapatista and CNI Women – A Day Without Us. Photo from Tulan Kaú by Isaín Mandujano

With the demand of “the macho government dies,” thousands of Zapatista rebel indigenous women with candle in hand, woke up early in the 12 Caracoles to add their voices today, to the thousands of women who yesterday also demanded a stop to the femicides and to the violence against them. [1]

“Long live Comandante Ramona, Compañera Guadalupe lives, viva the compañera Olga Isabel, Viva the compañera Berta Cáceres, long live the journalist Miroslava,” were other slogans where masked Zapatista women vindicated other women who have died or have been murdered.

A little before five o’clock in the morning, some 500 Zapatista women went down from the dormitories where they spent Sunday night, to reach the plaza of this Zapatista Caracol Number 11, called “Dignified Spiral, weaving the colors of humanity in memory of the fallen” located in Tulan Kaú (Strong Horse), a rural community between Amatenango del Valle and Comitán.

Afterwards, the masked women left the plaza of the Zapatista Caracol and formed two fences on both sides of the la Pan American International Highway where in the darkness the candles only illuminated their eyes behind the black ski mask or the red paliacate.

For two hours, the rebel women chanted slogans, while in both lanes, private cars, private freight and passage motor transport and even military vehicles, stared at the masked women with amazement.

The same slogans were chanted in EZLN’s 12 Caracoles: the Caracol Jacinto Canek of CIDECI-Unitierra, in San Cristóbal de las Casas; in the Caracol Resistencia and Rebellion A New Horizon, Dolores Hidalgo community in Ocosingo; in the Caracol Root of the Resistances and Rebellions for Humanity in Jolj’a in the municipality of Chilón.

[1] The Mexican government estimated that there were 80,000 women who marched in the Zócalo of Mexico City on March 8. That number is considered “ridiculously low.” There were also marches in other Mexican states. Enlace Zapatista has photos from all the Zapatista Caracoles.

← The Maya Train, development and State presence
The mayor of Aldama, Chiapas, asks Army and NG to intervene in agrarian fight →