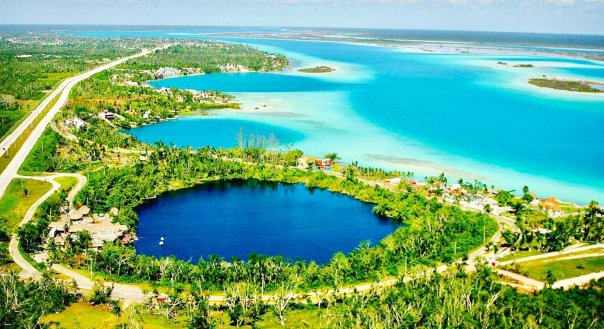 On the eve of the bidding process for two stretches of the route of the Maya Train, Carlos Joaquín, governor of Quintana Roo, and Miguel Torruco, Secretary of Tourism, inaugurated the pavilion of the Mexican Caribbean at the International Tourism Fair (Fitur). They promoted the destinations of Bacalar, Chetumal and Mahahual, places of recent incorporation into the Quintana Roo tourist industry. For the current federal administration, “development” of the Mexican Southeast is definitively tied to the tourism economy, in the service of which the Maya Train megaproject is conceived.

However, faced with the exaggerated benefits of the tourist economy as a panacea for a better life, testimonies of those who live on the Quintana Roo Coast, including in locations still marginalized from mass tourism, they agree on a common concern: the increase of violence due to the presence of criminal groups. Observing the trajectory of Cancun and the tourist region called the Riviera Maya, a trend is projected in which the growth of the tourist industry is accompanied by the increase of criminal activity, among other variables. Here, the tourist industry has promoted the complementary development of the “legal” economy –marked by the systematic violations of human, cultural, labor and environmental rights – and the “illegal” economy strictly linked to the first. The criminal economy is articulated in different turns: trafficking, principally of cocaine, to the United States; direct sales in the thriving local market, which also includes a prostitution network in nightclubs; and laundered reinvestment in real estate developments of the profits obtained, favored by the administrations of Villanueva (1993-1999) and Borge (2011-2016).

If the situation in the famous “leisure paradises” of the Caribbean is alarming, the context in the “new destinations” that Joaquín and Torruco promoted at the International Tourism Fair shown an identical trend. The confrontation that happened on January 27 between the Army and the armed group that was defending an small plane loaded with around 800 kilos of Colombian coca, is the most recent of a long series of violent acts that position southern Quintana Roo as a strategic area for the shipment of the coveted white powder. The “narco-triangle” between Bacalar and Othón P. Blanco, and that extends to the border between Belize and Campeche, has become in recent years a destination for the reception of flights coming from Central and South America. An abandoned jet was found in 2017; in 2018, there were three narco-planes that were burned in the region; while in 2019 a jet and two small planes with cocaine shipments crashed.

Bacalar is a few kilometers from the coast where the drug traffickers’ ships release the white shark, cocaine packages that are picked up and routed on land towards the state’s north, or clandestinely sent off on international cruise ships that dock at the port of Majahual. When they’re lucky, the fishermen from Xcalak, a border community, catch a lost package among the sargassum on the beach.

A study of the SNSP’s numbers reveals the elevated incidence in intentional homicides (38 for 100,000 inhabitants in 2018) in Bacalar, sparsely populated and mostly rural. Its attraction is the Lagoon of the Seven Colors, very coveted by an incipient tourist development since its declaration as a Magical Town, and that would augment exponentially with the installation of the Maya Train station. Currently, Bacalar unites on a minor scale all the problems that accompany tourism as a dispossession machine: enclosure of the shore of the lagoon and of the cenotes, privatization of access to water; despojo violent dispossession of ejido and private lands; collusion of municipal authorities, land speculation for construction, an absence of territorial and ecological ordering, environmental pollution, etcetera.

In conclusion, considering the Maya Train project’s stated objective of promoting the tourism economy and the creation or expansion of urban nuclei with an exclusively tourist vocation in the social and political context that currently characterizes the Peninsula, the tendency that the problems already present will multiply in the new “development poles” is evident, particularly in relation to the exponential growth of criminal violence. Who would be, in such a context, the beneficiaries of economic “development”? What dimensions of the economy and which businesses would prosper?

← The EZLN inaugurates new government centers
ENCUENTRO: IN, AGAINST, AND BEYOND THE CAPITALIST HYDRA →