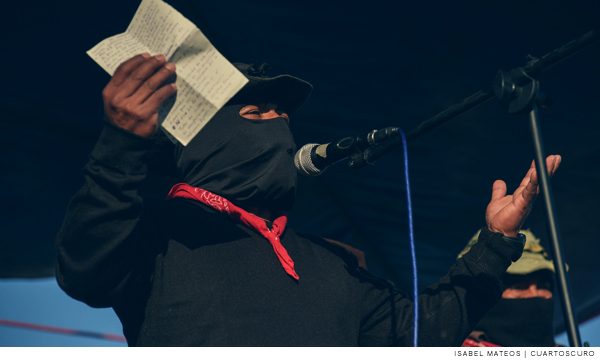 This beginning of the year has been marked by an intensification –in social networks and communications media– of the campaign of lies, fibs or fake news against the Zapatista National Liberation Army (Ejército Zapatista de Liberación Nacional, EZLN), which has been extended to the National Indigenous Congress-Indigenous Government Council, (Congreso Nacional Indígena–Concejo Indígena de Gobierno (CNI-CII), and to those who, in other areas of public life, show their support for the anti-capitalist, anti-patriarchal and anti-racist struggles of the Zapatista Mayas, in opposition to the policies of the government of Andrés Manuel López Obrador and his “Fourth Transformation.”

A good part of this campaign reveals the racism of the political elites and of some Fourth Transformation organic intellectuals, including high officials, who insist on denying all prominence to indigenous peoples, and personifying Subcomandante Marcos – Galeano as the sole author and subject of the EZLN’s political initiatives. Proof of this are recent opinion articles, videos, statements, forums, cartoons and messages on Facebook and Twitter, which demonize the one who was spokesperson of this organization, ignoring or denying that, since years ago, the role of spokesperson for the EZLN falls to Subcomandante Insurgente Moisés, of Tzeltal origin.

Specifically, it corresponded to Subcomandante Moisés to read the communiqué at the 26th anniversary of the war against oblivion, on December 31, 2019, in which he endorses the commitment of his organization to resist and defend Mother Earth, even at the cost of life. In this historic address, a succinct account of these 26 years of the EZLN is made, from the moment in which they chose between “dying like animals” or “dying like human beings who struggle for life.” In spite of contempt, deception, betrayals and the counterinsurgency policies of the rotating bosses to destroy us, the Zapatista Mayas have achieved “maintaining the flag of their rebellion,” “without surrendering, without selling out and without giving up,” answering, no doubt, to those who, from ignorance, an unconditional quality or pride, question: where were the Zapatistas when such and so event in national life occurred?

Different from the institutional Mexican left and the governments with this ideological orientation, the Zapatistas have been constructing what they call “a project of life” for these 26 years, “as any person who has an honest heart can see,” Sub Moisés points out, in which “schools and health clinics flourish in their communities and the land is worked collectively and we support each other collectively.”

For the new heralds of progress and modernity, it’s impossible to understand a characteristic of the Zapatistas and of the peoples grouped in the National Indigenous Congress-Indigenous Government Council, and that Sub Moisés describes diaphanously: “We are therefore a community.

A community of communities! The Zapatista women have their own voice, their own path. And their destiny is not one of violent death, disappearance and humiliation. Zapatista childhood and youth have health, education and different learning and fun options. We maintain and defend our language, our culture and our way. And we remain firm in fulfilling our duty as guardian peoples of Mother Earth. All this has been thanks to the effort, sacrifice and dedication of the organized peoples. And all this has also been thanks to the support of individuals, groups, collectives and organizations around the world.”

Likewise, for those who defend the 4T’s clientelism development projects, it’s difficult to understand what the capitalist system means according to Zapatista perspectives and critical thinking, which Sub Moisés describes as: “that beast that wants to eat and destroy everything,” to which: “it doesn’t matter destroying nature, entire peoples, ancient cultures and complete civilizations. The Beast’s attacks even include destroying the entire planet. The capitalist hydra, the destructive beast, looks for other names to hide and attack and defeat humanity, –says Sub Moisés–. And one of those names behind which death is hidden is ‘megaproject’. ‘Megaproject’ means destroying an entire territory. Everything: the air, the water, the land and the people! (…) And the beast that hides behind the megaprojects has its trick, its lie and its trap to convince. The beast says that it’s for progress. It says that, thanks to those megaprojects, the peoples will have pay and many advantages of modernity. And with this progress and modernity we wish to remember here a CNI compañero that was murdered this year (2019): the brother and Compañero Samir Flores Soberanes. And we remember him because he wondered and asked for whom is that progress that they talk about so much.”

The EZLN implores us to stop the war against humanity, “each one in their geography, their calendar and with their styles.”