Mexico, trapped between the migrant flow and US policy 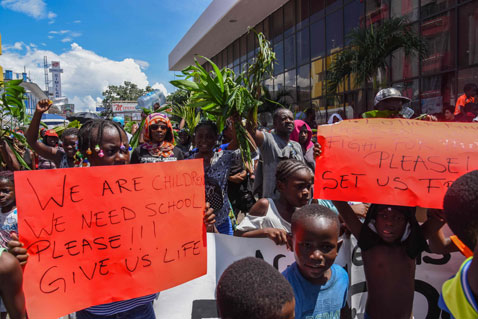 Some 200 African men, women and children mobilized in Tapachula, Chiapas to demand the delivery of humanitarian visas that allow them to travel through Mexican territory. Photo: Afp.

The United Nations High Commissioner for Refugees, Filippo Grandi, visited Mexico during the latter part of September to observe the situation of migrants and asylum seekers. Interviewed prior to leaving Mexico, Grandi viewed Mexico as trapped “between double pressure:” on the one hand, an unprecedented migratory flow coming from Central America and other countries (Africans, Cubans, Venezuelans and Nicaraguans), “who are not only requesting asylum,” and on the other hand a response from the North, limiting access to U.S. territory.

Grandi was asked about Mexico’s response to these pressures, which has been to accept the US policy called the Migrant Protection Protocols (MPP). According to the US Department of Homeland Security, this policy requires that certain foreign individuals entering or seeking admission to the US from Mexico –illegally or without proper documentation– may be returned to Mexico to wait outside the US for the duration of their proceedings, where Mexico will provide them with all appropriate humanitarian protection for the duration of their stay. That policy has caused thousands of asylum seekers to have to reside in extremely dangerous cities on Mexico’s northern border.

Grandi emphasized that the UNHCR is not involved in the MPP and does not endorse the policy. However, he knows that there are many people requesting asylum and they are forced to live in very dangerous situations. There are kidnappings, human rights violations and manipulation from criminal groups in the area. Grandi recommended more resources for the COMAR at the northern border and an easing of procedures for asylum.

Several days before the above interview, Grandi was in Tapachula, Chiapas, very close to Mexico’s southern border for the inauguration of the new installations of the Mexican Commission for Assistance to Refugees (COMAR). According to a report from Isaín Mandujano in Chiapas Paralelo, African migrants arrived at the COMAR’s new offices in Tapachula, where they tried to deliver a letter to Filippo Grandi. All was going well until Yadira de los Santos, federal delegate of the National Migration Institute (INM), its initials in Spanish) made an appearance at the site. This angered the African migrants and activist human rights defenders, who started to protest against the federal official. Spirits rose when federal police intervened and began struggling with the migrants.

Paul Mananga Ntoto, one of the few African migrants that speaks Spanish, demanded that the UNHCR and the COMAR intervene so that the exit letter be given to them right away so that they can continue on their way. The migrant from the Central African Congo reproached the treatment that all the migrants from his country have received up to now; they remain stranded in this southern border city of Mexico. The activist and migrant defender, Luis Rey García Villagrán, questioned the violation of the human rights of the migrants that enter our country and asked that they be taken care of immediately.

UNHCR officials came out to attend to the migrants that were protesting and then a woman migrant threw herself on the tires of Filippo Grandi’s truck in order to receive attention. 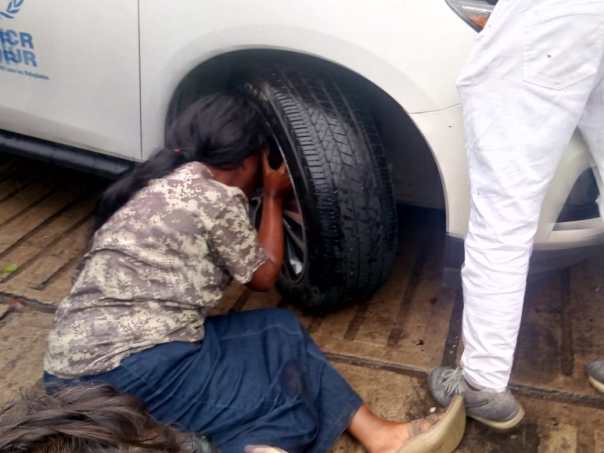 Grandi emphasized that Chiapas is the state in Mexico that receives the highest number of requests for asylum and that Chiapas will increase its response capacity faced with the increase in asylum requests. “We must work together to respond efficiently and quickly, and also justly, respecting the rights of those who have to flee,” Grandi said during the inauguration of the new space of the Mexican Commission for Refugee Assistance in Chiapas, Mexico, supported by the UNHCR. 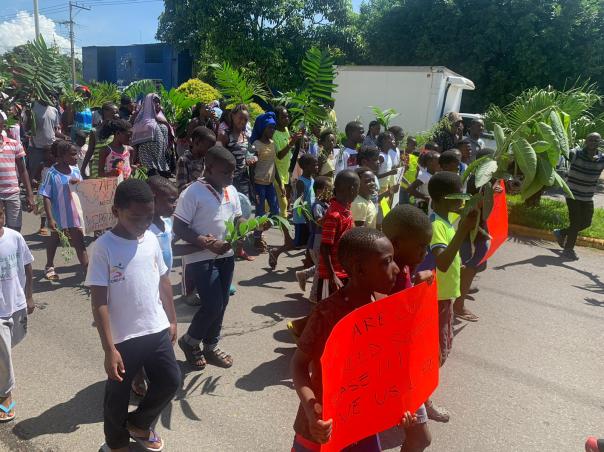 Apparently, officials of the COMAR and the UNHCR did not act quickly enough to satisfy the African migrants’ concerns about delay. Approximately a week later, after marching to demand delivery of the document that would permit them to move freely through Mexico, more than 200 young African migrants threw barricades, tents and chairs placed in the central park of Tapachula, Chiapas for the celebration of what’s called the Regional Security Fair.

In the morning, migrants came out of the 21st Century Migratory Station, located in the northern part of that border city, where they have maintained an occupation for more than 45 days, and they walked to the center of Tapachula. They reached the central park, where they found the city hall surrounded with metal barricades, a stage, tents and chairs, so in order to advance towards the esplanade they threw what they found in their way, while some agents observed.

In conclusion, all of the above calls into question the deliberate cruelty of the US policy named the Migrant Protections Protocols, which creates long delays for migrants seeking asylum in a country without the existing infrastructure to accommodate them.

← The turns of neoliberalism
Colonialism conflicts violently with Mapuche women →