Zapatismo, a dream that encompasses the world 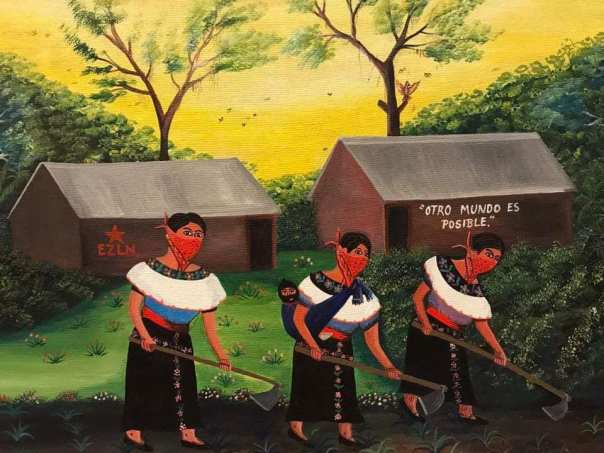 Another world is possible

One after another, the same in los Altos (the Highlands) of Chiapas as in the Northern Zone, different hand-painted signs on wooden boards or sheets of metal eaten away by the patina, some with images of indigenous women with a paliacate over the face, warn: “You are in Zapatista territory in rebellion. Here the People rule and the Government obeys.” They are signed by the Good Government Juntas.

Signs, in many ways similar to those placed on roads to welcome travelers to a federative state, mark the limits of the territory self-governed by the Zapatista peoples and their de facto jurisdiction.

As Raúl Romero remembered in these pages, their origin dates back to two distinct moments: the formation of the Zapatista rebel autonomous municipalities (municipios autónomos rebeldes zapatistas, Marez), within the framework of the rebel offensive of December 1994 against the electoral fraud of Eduardo Robledo; and, the 2003 foundation of the first five Good Government Juntas (Caracoles) in order to exercise de facto autonomy without asking permission.

What’s novel about this process is that, according to what Subcomandante Moisés announced, new boundaries and nomenclatures were established in Chiapas. The rebels just announced that they created, apart from the government authorities, 11 new Zapatista centers of autonomous resistance and rebellion (Crarez, their Spanish acronym): seven of them are Caracoles and the other four are autonomous municipalities (municipios). So, now there are 43 Zapatista centers.

Part of these self-government bodies rose up for the first time on the thousands of hectares occupied at the beginning of 1994, and distributed to work for the collective benefit. Their jurisdictions are differentiated by the complexity of the problems that each one of them had to resolve. Two books give an account of this process: that of Paulina Fernández Christlieb, Justicia autónoma zapatista: zona selva Tzeltal; and Luchas “muy otras”, by Bruno Baronnet, Mariana Mora and Richard Stahler-Sholk.

The expansion of Zapatista autonomy to new territories contradicts the version of the supposed desertion of its social bases as the result of assistance programs such as Sembrando Vida (Sowing Life) or Jóvenes Construyendo el Futuro (Youth Constructing the Future). Obviously, in a process as countercurrent as the one that they have impelled for 25 years, there are sympathizers that stand aside. But, central to evaluating it is the impulse and general tendency that follows. The recent foundation of another 11 Crarez makes it clear that the insurgent magma not only survives, but also grows exponentially, while it constructs unprecedented routes of autonomy.

The EZLN called its new campaign “Samir Flores lives.” Samir was the Náhuatl blacksmith, director of Radio Amiltzinko and leader of the Permanent Assembly of the Peoples of Morelos, which opposed the Huexca construction of the thermoelectric plant. He was murdered on February 20. His crime has not been clarified.

The new Zapatista campaign bears great similarities to previous offensives. It was processed and agreed upon (as was done with the armed uprising) in multiple community assemblies. It broke the government siege, unfolding as a social-political force, through peaceful sui generis mobilizations, which changed the field of confrontation with the State, taking it to the terrain in which the communities are the strongest: the production and reproduction of their existence.

Instead of demanding solidarity from allies, friends and collectives that struggle, it calls for constructing a new political initiative with them. It proposes to the National Indigenous Congress-Indigenous Government Council (Congreso Nacional Indígena-Concejo Indígena de Gobierno) undertaking a forum in Defense of Territory and Mother Earth, capable of articulating a response to the megaprojects and the dispossession, open to those who struggle for life.

It calls upon urban Zapatista archipelago to form an International Network of Resistance and Rebellion, not centralized, but that would work in the distribution of the histories of below and to the left. It announces bilateral meetings with groups, collectives and organizations with real work in their regions. It proposes that intellectuals and artists participate in festivals, gatherings, seedbeds and fiestas.

Limiting themselves to being hosts, it suggests to parents of disappeared and prisoners, and to the organizations that work with them, to those who fight for sexual diversity and the human rights defenders, to meet in Zapatista land to share nightmares, pains and horizons. And, already on the right track, it announces that the Zapatista women will convoke a new gathering of women that struggle, only for women.

As Subcomandante Moisés explains it, the creation of the Zapatista peoples’ self-government spaces is the result of political work, mainly of women and youth. But, also, of the accumulation of meetings and seedbeds that they organized in which “their imagination, creativity and knowledge became more universal, in other words, more human.” They learned, according to their words: “that a dream that doesn’t encompass the world is a small dream.”

← CNI: the indigenous rebellion reaches 24 states
The Mexican State will assume responsibility for the Acteal Massacre →