Galeano: With the current government, it rains on wet for the original peoples

[A new communiqué entitled “Overture: reality as the Enemy” is available in Spanish on Enlace Zapatista (link below). When the English translation is available, we’ll post it. Meanwhile, here’s a summary from La Jornada.] 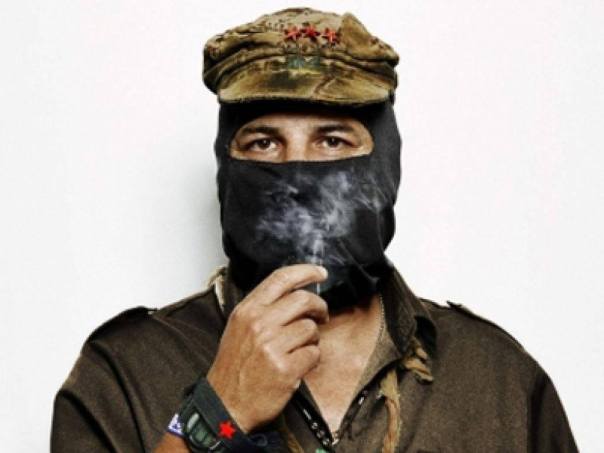 Subcomandante Galeano, formerly Marcos, affirmed that with the current government, for many Mexicans, “not only for the original peoples, it rains on wet: dispossessions, robberies, threats, persecution, prison, disappearances, rapes, blows, deaths… and, yes, sometimes alms.”

In a communiqué divulged last night on the Enlace Zapatista page, he said that: “up there above they declare that everything is going well, and here below that everything is going badly, and that it’s going to get worse. Although now all critical thinking, all scientific analysis, all art that reveals and rebels, faces not reality, but the label of ‘right’, ‘conservative,’ ‘reactionary,’ ‘fifí,’ or the occurrence that reaches the lips of the inquisitor and overseer who, on the finca that we suffer, distributes guilt and condemnation.”

He stated that: “the comic pawns of a Calderón, a Fox, a stale PAN, a PRI bringing the coroner to delay the death certificate, a PRD that somehow has to show that it exists, and the thinkers that accompany them, seem rather to be forged by the official party, because they get two things:

“One is that they give easily refutable material to someone who doesn’t even know where he stands. The other is that that annuls any criticism, singling out observation that has as its basis a rigorous and documented analysis. In addition, of course, that all criticism that we no longer say comes from the left, but rather from progressive sectors and liberal democrats, sounds like one more note in the false symphony of the plot and the ‘soft coup’ (the story of fashionable deceitful fools) behind which the supreme one takes refuge.”

He said that: “the rights that they now dispute, and that they have left as spectators of the left and of progressivism, are at war. Some for maintaining Power (or in what they believe that Power is), and others for returning to a privileged place, to the pulpit from which they reign. Who to believe? You are right: nobody. Nor the reality?”

He affirmed that: “it rains everywhere and on everyone, at least here below. Perhaps some, just barely begin to feel the cold drops stinging the body; but for [email protected], and not just for the original peoples, it rains on wet: dispossessions, robberies, threats, persecution, prison, disappearance, rape, blows, death… and, yes, sometimes alms.”

He added: “ A list? It’s difficult, but something rushed could be:

–Families of prisoners, [email protected], [email protected], in search of truth and justice. And the question that will always be unanswered is: why? The great absurdity of chaos distributing absences because yes, for statistics, for raffle. If death can be terrible, not knowing what happened and why, is out of all human logic. It is a cruelty that could only be plotted by the human mind.”

According to Galeano, “the social networks are not enough to ‘purify’ the newly enthroned Aryan race: ignorance. The system continues needing the violence of the state institutions to ‘complete’ the raids. I don’t know if the aversion to difference was in the DNA of the foundational Big Bang of the universe, but ignorance has always persecuted and attacked knowledge and its possibility: intelligence.”

He pointed out that: “if before the defense of ignorance was dragged around at the speed of carts and galleons, today it navigates in yottabytes (a yottabyte = one followed by 24 zeros of bytes), and at the speed of light. It could be said that networks have the governments that they deserve. But there is still resistance and rebellion there. There is no lack of one who doesn’t follow the flutist of the trending topic and chooses reflection, analysis, doubt or questioning. A minority cornered and overwhelmed by influencers and [email protected] [email protected] discovers that stupidity also wins fame and social recognition. But the potential of the social networks is also its limit: the transience takes the focus of attention away from the nose and stopping is not possible if you want to keep up. The worst enemy of scandal is the scandal that follows almost immediately.”

He affirmed that: “the traditional communications media are carried away by virtual drunkenness. Almost all of the written press does nothing but recycle what is fashionable in the networks, no matter how hard it’s still lagging behind. It remains pending filling the void of a press that investigates, provokes reflection, feeds intelligence and encourages knowledge.”

The complete text can be read in Spanish on Enlace Zapatista: http://enlacezapatista.ezln.org.mx/2019/08/11/obertura-la-realidad-como-enemiga/

← EZLN: The Opening Act
The Overture: Reality As Enemy →