From confrontation to autonomy 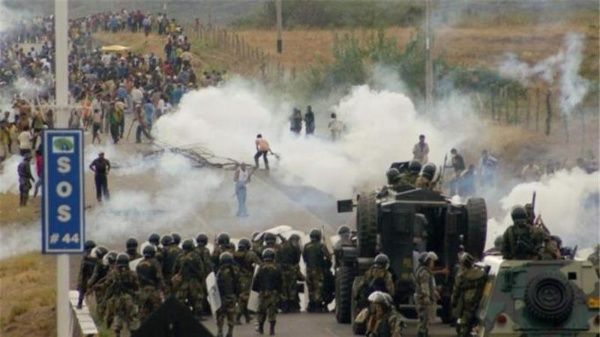 The history of the Autonomous Territorial Government of the Wampis Nation dates back to a half century ago, a process that led to the formation of the Huambisa Aguaruna Council in 1977, under the Peruvian military regime. It was also a response of the Wampis and Awajun peoples to the mestizo colonization of the Marañón River, near the border with Ecuador. A little later they broke with the Jesuits that were working with them and decided to take a path of their own.

In a first stage they insisted on the titling of their lands, as a way of recuperating territorial integrity as a people. This process implied many tensions with external actors, the military, extractive companies and mestizo colonizers, and led to the deployment of communal forces to evict the invaders, which was answered with the incarceration of leaders and directors.

With the crisis of the military government at the beginning of the 1980s, there was what the sociologist Tania Gómez (author of a magnificent thesis about the autonomous Wampis government that inspires this article) calls an “avalanche in the Amazon,” from the hand of the multi-national companies in the context of globalization. Hydrocarbons and gold mining are the two activities that most affect the Amazonian peoples, impelled by the authoritarian government of Alberto Fujimori (1990-2000).

The crisis happened in 2009, when the State disavowed the agreements that it had with the peoples. “The Wampis are learning that both the titling and the environmental categorizations of their territory are insufficient tools. The State begins to modify the legal frameworks for permitting the entry of global forces of enormous magnitude, without taking the effects on the life of the Wampis into account,” points out the aforementioned work of Gómez.

The confrontation between indigenous Awajun and Wampis and police and military forces took place on August 5, after almost two months of intense mobilization in the Amazon for the repeal of the decrees that permitted an abusive exploitation of the communal wealth without consultation or consent of the original peoples, with a result of 33 deaths between demonstrators and police.

The day known as the “Baguazo” (Bagua Massacre) was a parting of waters, besides the synthesis of a long and intense cycle of Amazon struggles. In just six years, on the back of new frustrations that sharpened the historical distrust of the State (criminalization and divisions), the Wampi people decidedly took the path of autonomy.

They had to set aside NGOs and national organizations, including the temptation of municipal administration. This experience also convinced them of the limits of institutions that never treated them as equals, including the laws of prior consultation, which were not applied or were manipulated.

“After participation in these processes, it is concluded that prior consultation is just a convincing procedure in which the State seeks to attack weaknesses of organization.” In order to construct autonomy the communities of two river basins (the Santiago and Morona Rivers) had to articulate and elaborate their autonomous statute in more than a dozen workshops with broad participation of the bases.

One of the central points of the statute emphasizes: “we consider invalid any treaty or consent effectuated in favor of the companies in a separate or partial way before the official process between our nation and the Peruvian State had ended.”

The autonomous government’s organisms of power know four bodies: the principal assembly with 96 assembly members; an executive government with its advisors; governments of both basins and governments of each community with their respective elected authorities.

As the Peruvian sociologist Alvaro Giles points out: “it’s about the first indigenous people in the country to change the strategy of indigenous syndicalism for the idea of self-government.” He adds that there are now three other Amazonian peoples pueblos in the process of founding their autonomous governments, so “we would be facing a new strategy in the world of the Peruvian Amazon.”

Only two observations fit. One is that autonomy is not an option anchored in ideologies, but rather in histories and worldviews that are deployed to face concrete challenges. What shows us that we are faced with genealogies different from those of European origin, analyzed by Castoriadis and others.

Two, that the peoples in movement (a more adequate concept than social movements) are discovering that autonomies and territorial self-governments allow them to confront predatory extractivism in better conditions than any other strategy that may pass for negotiation with the State. In the coming years we will see a proliferation of autonomous processes.

Accumulation by dispossession and capitalism can only be confronted and defeated with other political cultures, outside the institutions and agreements above.

← Frayba: forced displacement of 36 people from Chol community in Chiapas
The lives of indigenous Chiapas prisoners at risk after 132 days →