Surrendering to la migra, “the new normal” at the southern border of Chiapas 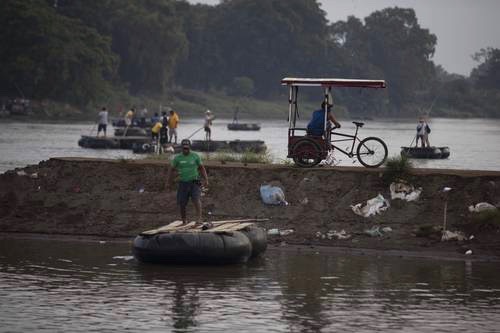 The Suchiate River is part of the almost 1,000 kilometers of border with Guatemala, seen yesterday from Tapachula, Chiapas. Photo: Alfredo Domínguez

In the shadow of the Viva México vehicular bridge, at this city’s northern exit towards Mexico City (in fact, towards the whole country), a group of seven citizens of India, young men, seated on the rails of the lower bridge over a stream that runs under the highway, wait docilely while they make room for them in a National Institute of Migration (INM) van, since the only one, for now, is completely full of migrants intercepted by the Federal Police and INM agents in plain view of three members of the National Guard (NG) wielding their weapons tranquilly. Or are they marines? These days you don’t know which one is which.

On the other side of the highway, half hidden behind acrylic shields and gray raincoats, a dozen members of the NG doze seated along the ample box of a truck belonging to the Military Police of the Navy Secretariat. They wait for their turn to monitor the immigration checkpoint, as along the entire highway towards Oaxaca, all public transportation vehicles are required to stop so that INM agents appear, scrutinize all the passengers and in case of suspicion ask for documents. The migra has been known for identifying Central American migrants (the least obvious) at a single glance.

It’s also true that many migrants travel willing to surrender and be taken to detention centers. This is usually the case for Pakistanis and Indians, generally men, traveling in groups.

A grilled INM paddy wagon arrives that is parked at the side of the full van. The agents open the front doors of the two vehicles, as a barrier, and transfer a dozen Central Americans to the paddy wagon, including a complete family from Honduras. They will be driven to the 21st Century Immigration Station. Immediately, Federal Police escort the young men from India to the interior of the recently vacated truck, to be taken at once to the detention center at the Mesoamerican Fair.

Given this endless movement of migrants lacking a visa, can we talk about normality? Routinely yes, although yesterday, perhaps due to the publicized deployment of the NG and the Mexican president’s visit on Thursday, is a rather “low” day, and even so interception of travelers is incessant.

The same thing can be said about the Chiapas border of the Suchiate River, especially in the early hours, when the night is barely ended. We’re not talking about a continuous flow, but there are always one or more inflatable boats with planks that transport citizens of Haiti (such was the case yesterday morning) or of any other origin. Most likely, these Haitians will spend the night inside the 21st Century Station (if they capture them or they surrender), or in the streets of Tapachula.

Meanwhile, outside the station, yesterday at noon a hundred Congolese and Haitians, including a significant number of pregnant women and small children, were hanging around, resting or making a line in front of the bars waiting for some document.

Such is the new every day life in the most important border region of Chiapas. But let’s not forget that the state shares around a thousand kilometers of land, river and lake border with Guatemala. According to what officials and observers predict, to the extent that the controls increase on the usual routes, migrants look for less obvious and more dangerous ways, like the Petén jungle, the Usumacinta River or the mountains to the north of the Soconusco.

← Kana’antik k-lu’umo’ob: The Maya horizon
For life, peace and justice in the Mountains of Guerrero →

One Comment on “Surrendering to la migra, “the new normal” at the southern border of Chiapas”