The CRAC-PF goes after the killers from Los Ardillos 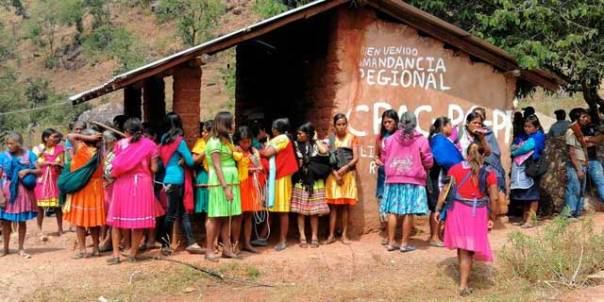 Members of the Regional Coordinator of Community Authorities – Founding Peoples (CRAC-PF) guard the headquarters of that organization in the community of Rincón de Chautla, municipality of Chilapa de Álvarez, Guerrero, where they’re holding three subjects accused of having delivered two of their compañeros that were murdered to a criminal group. Photo: Sergio Ocampo

Members of the Regional Coordinator of Community Authorities-Founding Peoples (CRAC-PF, its initials in Spanish) are going to capture 100 hit men at the service of the Los Ardillos criminal group in at least 17 communities of that area of the Montaña Baja (Low Mountains), David Sánchez Luna, regional coordinator of that security system, announced.

He warned that they will not turn over the three people that they have been holding since May 25, among them a woman, who the CRAC-PF accuses of having turned Bertoldo Hilario Morales and Isaías Xantenco Ahuejote, the two community police agents that were found dead May 24, over to their executors.

One of them, he pointed out, is the nephew of Tranquilino Palatzin Tranquero, one of the leaders of the Paz y Justicia group, linked to Los Ardillos. “They are halcones at the orders of Tranquilino. One of the detainees told us that he no longer wants to return to his town because they are going to kill him. He also told us that that person charges 1,500 pesos to those who don’t attend his meetings.”

Sánchez Luna explained that: “they were detained for complicity and the state government has not pressured us to release them. That seems strange to us because a state police commander was traveling with Tranquilino and others in several trucks to Rincón de Chautla to get the detainees, but they couldn’t.”

On May 25, municipal authorities offered one million pesos to the residents of Xicotlán –where the murdered community police agents were from– to that they would release those held, who would later be moved to Rincón de Chautla.

He added that the three people held do community work and will stay 15 days in each one of the 17 communities in the region. “Only one of them belongs to Los Ardillos; the other two are accomplices, who traffic drugs. The assembly will decide on their release based upon their behavior.”

He also said that the CRAC- PF would continue training the women and children learn how to defend themselves from the criminals and to detain their accomplices. In the communities of Rincón de Chautla, Ayahualtempa and Zacapexco women were already integrated into the community police.

In mid-May a group of children with apparent military training announced that they would defend themselves from criminal groups. A week later, several women did the same.

Interviewed in Rincón de Chautla, Sánchez Luna lamented that for the third time the attorney general of Guerrero, Jorge Zuriel de los Santos, had left them in the lurch, despite the fact that they were going to explain to him issues related to the insecurity and violence in the region.

He warned that as long as the three levels of government don’t arrest those responsible for the violence in Guerrero, the CRAC-PF will continue strengthening the community system.

← The Morelos “consulta” was not legal
Marichuy: Militarization, to assure dispossession against indigenous peoples →