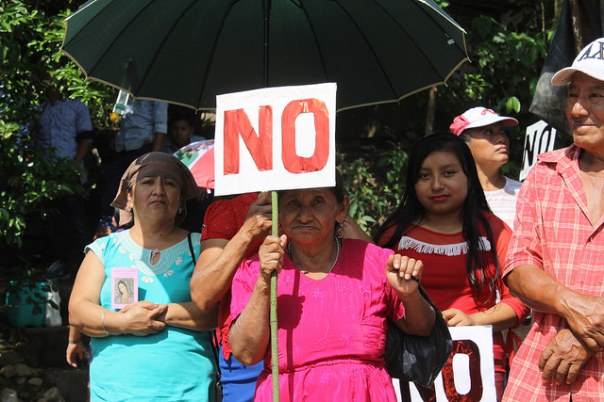 Dams in Chiapas would fundamentally be to provide water and electricity to mining and oil extraction projects that exist in the state. There is resistance because of human rights violations.

Some 79 dam projects are planned in the state, proposed by the Federal Electricity Commission, plus the state government’s 19 mini-hydroelectric dams, projects that in sum threaten the life and territory of nearby communities, according to organizations and academics, because of their relationship to the operation of mining and oil projects that already violate rights to water and life.

Antonino García, a research professor at the Autonomous University of Chapingo with offices in San Cristóbal de las Casas, indicated that operation of the 98 hydroelectric projects would not benefit the communities at all; to the contrary, their ecological consequences would be fatal.

Within the framework of the Day of Global Action against Dams and in Defense of Rivers, organizations spoke out against the realization of such projects and, therefore, demanded a new alternative energy and water management model from the Mexican State.

The researcher said that the most advanced project is the one for 4 hydroelectric dams on the Usumacinta River, which the then Water Resources Ministry, now known as the National Water Commission (Conagua), first proposed decades ago; however, a lack of planning and the corruption caused the projects to break down and not advance.

García mentioned that the 4 hydroelectric plants that currently operate in a 100,000-hectare area don’t bring any benefit to Chiapanecos, since the electricity was sent to the north and center of the country.

Additionally, García pointed out that the implementation of activities for a dam in Chiapas would serve to accompany mining activities, since dams provide the water and electricity for mining. He added: “for example, if the 142 mining projects that exist in the state and that encompass 1,121,000 hectares were put into operation, the amount of water and electricity needed would be unimaginable because the dams would serve the mining operations.”

The consequences of the implementation of those projects on the environment would be to leave the hills without biodiversity, perforated wells and also wells fractured because of fracking, the rivers dammed and the water contaminated by mining. He added: “the construction of a mining company cannot happen without the construction of a dam.”

“If the welfare period, which dates from 1950 to 1982, didn’t bring any benefit, the construction of the 4 big hydroelectric dams in Chiapas won’t bring it now. The government of Andrés Manuel López Obrador is between a rock and a hard place because there are many international interests involved, with multimillionaire oil, mining and construction entrepreneurs,” he said.

Finally, the teacher said that the resistance of the Movement in Defense of Life and Territory (Modevite), is the strongest example of opposition to the dams, since their human rights have been threatened by the implementation of oil extraction projects, plus a geothermic plant in the Chichonal Volcano, therefore the construction of a dam, would be used to feed those projects, which would increase the damage.

For its part, the Otros Mundos A.C organization and the Movement of those Affected by Dams in Latin America (MAR) expressed that it is regrettable that as of today the large, medium and mini companies for the production of energy and the dams for the supply of water continue being part of the water and energy management model in Chiapas, without taking into account the complaints about damages.

In addition, they demanded an alternative energy and water management model because as long as plans and development of projects for large companies to generate electricity and offer water for the mining companies, they will continue being [projects] “of death” and they would violate the human right to water and life.

Therefore, they asked the three levels of government for training, analysis and discussion of the current energy model, since an improvement is needed in the strategies for the defense of rivers and territory.

← CNI-CIG-EZLN: A Call to Days of Struggle
Evangelical power against feminism →

One Comment on “98 dams threaten water and life in Chiapas”