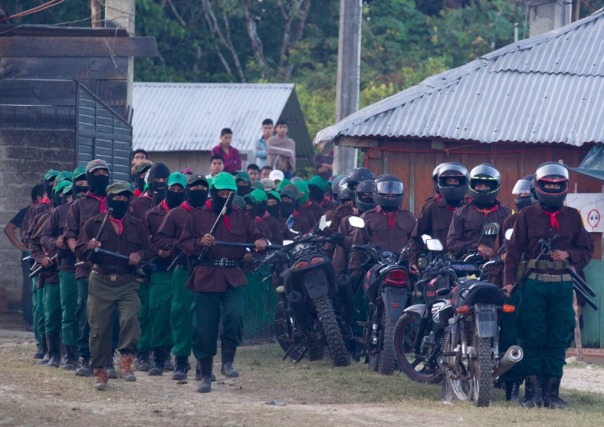 The arrival of Andrés Manuel López Obrador (AMLO) to the Presidency of Mexico and the triumph of Morena as the first political force in the Congress of the Union, the governorships of four states, the leadership of the Mexico City Government, numerous city and municipal governments, demands reflecting, with critical thought, about the reaches and limitations of what’s called the Fourth Transformation. [1]

It’s necessary to characterize the current government, the economic and social projects it considers priorities, as well as the new correlation of political forces that it is forming, for the purpose of having tools that permit comprehending and responding adequately to the new hegemonic system of domination with which capitalism is reconfigured.

It’s necessary to analyze the bases that sustain the Fourth Transformation, which does not clearly reveal its programmatic or legislative strategy. The fight against corruption, without a rupture with the development model, doesn’t set the basis for a change in the historical dimensions of national Independence, the 1910 Reform and Revolution. Denying the validity of the class struggle in Mexico, situating itself as the supreme arbiter of social conflicts and seeking to mutate the State into a redistributive clientele apparatus, does not signify a “historical transition of the Republic,” much less a “change of epoch.”

At the same time, an enumeration of the priority economic projects: Special Economic Zones, the Maya Train, development of the Isthmus of Tehuantepec, the planting of fruit and timber trees on one million hectares, construction of 300 roads in rural territories, refineries, a system of airports in the Mexico City metropolitan area; free zones on the northern border and the Isthmus region, continuity of mining projects, the repeated affirmation of respecting contracts, the independence of the Bank of Mexico, the chief of staff’s perspective of “making Mexico an investment paradise” and the Morena initiative in Congress to abrogate the current Agrarian Law and expedite another one that reinforces the mechanisms for the privatization of ejido and communal land, and especially, the acceptance of the Free Trade Agreement with the United States and Canada, confirm the continuity of economic policies within the logic of the capitalist system, of the neoliberalism that it claims to overcome.

Politically, the creation of the National Institute of Indigenous Peoples (INPI, its initials in Spanish) is a return to the old “indigenismo” established by the PRI regime, patronizing and corporative, which was characterized as an authoritarian and manipulative State policy for the indigenous peoples, and whose funerals were celebrated in the San Andrés dialogues between the federal government and the EZLN. The fact of establishing 130 offices of the new INPI in Native peoples’ territories, with functionaries that speak the respective language, with governmental resources and projects, is a direct aggression against the autonomic processes and the movements in defense of the territories and against corporate invasion, especially in the territories where deeper autonomic processes are developed, related to armed conflicts, such as the Maya Zapatista region, or which defend indigenous campesino territoriality, the INPI runs the risk of performing counterinsurgency labors and of the “conflict engineering” that mining companies put into practice in order to overcome the resistances.

It is established in the metaphor of Subcomandante Moisés that: “the overseers and foremen change, but the owners of the finca (estate) continue being the same.” Rejection of these projects on the part of the national Indigenous Congress-Indigenous Governing Council (Congreso Nacional Indígena-Concejo Indígena de Gobierno), numerous independent indigenous and campesino organizations, specialists in different scientific disciplines, as well as criticism of the government consultas (votes) for not complying with the conditions established in the Constitution, in Convention 169 of the International Labor Organization, the United Nations Declaration on the Rights of Indigenous Peoples, which mandate that consultations be prior, free, informed and binding, have not received the attention that they deserve and, to the contrary, were the object of contemptuous treatment on the President’s part.

In this sense, the climate of intolerance to criticism of the new government from the anti-capitalist Left stands out, claiming that “it plays the game of the right,” and “is a return to primitive communism,” or “a disparagement of the 30 million voters that elected Andrés Manuel López Obrador.”

Precisely because of the respect that all Mexicans who voted for a profound change deserve, the need is vindicated for a rigorous analysis of the nature and impact of the budding projects, of the directionality of the same, starting with the resistances below and to the Left, and with an intelligentsia committed to these struggles. The disjunctive continues being: with the prince or with the people.

[1] By calling his project the Fourth Transformation, AMLO is elevating his presidential project to the importance of: 1) the War of Independence from Spain, an armed conflict that ended 300 years of Spanish colonial domination and took place from 1810 to 1821; 2) the Reform, a war between liberals and conservatives from 1858 to 1861 that resulted in the Reform Laws, among which the separation of Church and State stands out; and 3) the Mexican Revolution, a war against the regime of Porfirio Díaz from 1910 to 1917, which resulted in the promulgation of the Mexican Constitution that, as amended, rules Mexico today.

2 Comments on “The Fourth Transformation?”