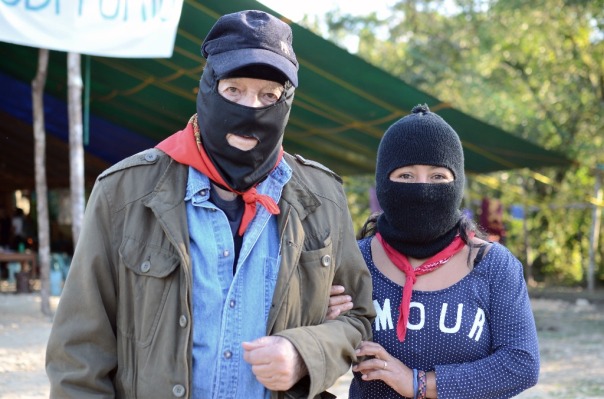 Comandante Pablo Contreras (Pablo González Casanova) in the second Gathering of Networks of Resistance in support of the National Indigenous Congress and the Indigenous Governing Council. Photo: Mariana Gutiérrez

The Zapatista National Liberation Army (Ejército Zapatista de Liberación Nacional, EZLN) said that it would not permit President Andrés Manuel López Obrador’s Maya Train project of death and dirty tricks to happen. It described López Obrador as “crazy” and “crafty,” and therefore, it said, it will defend what it has constructed in the past 25 years.

On Monday, López Obrador arrived in Villahermosa to attend the swearing-in of Adán Augusto López as governor of Tabasco. Upon asking him about the resistance announced by the EZLN to some of his projects, he answered: “They are within their rights, how good that they are going to do it, and many congratulations to everyone.”

In the voice of Subcomandante Moisés, during an event held in the community of La Realidad, municipality of Las Margaritas, in the Lacandón Jungle, the EZLN stated: “Think about how crazy it is that he says he is going to govern for rich and poor. Only a crazy person that is sick in the head can say that; his mind doesn’t work, he is braindead (…).

“He doesn’t know nor understand what he’s saying, and he doesn’t understand because his boss dictates to him what he has to say. It’s simple: you can’t support the exploited and the exploiter, you have to choose one of the two,” he said.

The EZLN criticized, without mentioning him by name, that Lopez Obrador “is very tricky, because (he says) that he is with the people of Mexico and continues deceiving the original peoples, demonstrating that he thrusts himself on the land asking for permission and saying that all the original peoples believe him, but we say that we don’t believe him.”

Upon referring to the ceremony held on December 1 in Mexico City’s Zócalo, where López Obrador received the staff of command from the indigenous peoples, the EZLN expressed: “Only because Mother Earth doesn’t speak, if she did she would say: fuck your mother; she would say: go to hell!”

In the context of the 25th anniversary of the January 1, 1994 Zapatista Uprising, he added: “We’re not going to allow them to come to destroy us,” and he warned: “We’re not afraid of their Nacional Guard, which changed their name in order to not say Army, but they are the same.”

He maintained that López Obrador “is going to destroy the people of Mexico, but principally the original peoples; they’re coming for us, especially for the EZLN.” He reiterated that they are not afraid of the new federal government. “We’re going to fight and we’re going to confront it.”

He remarked: “They’re coming for us, the original peoples. The consulta (vote) that they make is to manipulate the people. They are asking permission to attack us with votes. They are consulting so that they can come to confront us with that dirty trick of the Maya Train” (Tren Maya),” but “if they provoke us, we are going to defend ourselves. We’re not going to allow anyone to come to establish themselves in this territory in rebellion.”

He asserted that the so-called Fourth Transformation “is nothing of a fourth. Those of the third confronted him with facts. (López Obrador) says, for example, that he is going to forgive all the criminals. Like the one who says that he won’t do anything to the murderers of our Compañero Galeano,” murdered in the community of La Realidad in May 2014.