The Catalonia below and to the left

Posted on May 27, 2018 by Chiapas Support Committee 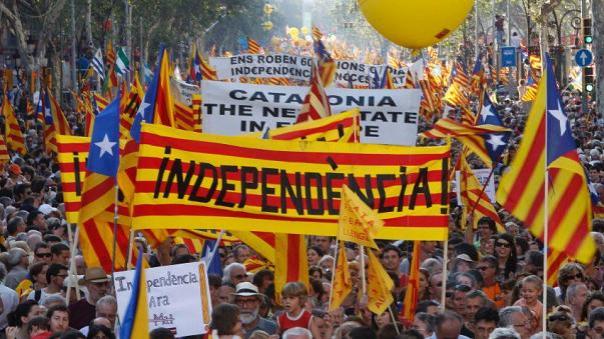 Catalonia demonstration in favor of Independence.

Things look different from a distance. Contours are barely distinguishable and large objects monopolize vision, while smaller ones are almost invisible. Not to mention what happens underground. Only in nearness, in the sharing of experiences and times, sounds and silences, can we come closer to understanding reality.

I had the immense good fortune to participate in the thirtieth anniversary of the NGO Entrepueblos (Between peoples), celebrated in Barcelona at the beginning of May, and to reunite with compañeros with whom we had worked together during exile. I spent almost all the time getting to know the realities of the grassroots independent world, which is more anticapitalist and anti-patriarchal than I suspected.

Meetings with members of the CDRs (Committees of Defense of the Republic), of the Candidacies of Popular Unity (Candidaturas de Unidad Popular, CUPs), with members of territorial collectives, the communications media, movements and social and cultural centers that, like archipelagos, people the geography of Catalonia. No organization occupies the center, in a world of galaxies and archipelagos. I wasn’t with leaders, but rather with grassroots militants, and that is more or less what I was able to see.

Sabadell is a working city of 210,000 residents a half hour from the center of Barcelona. In 1934 it was the first city of Catalonia to proclaim the republic. At the end of the 1990s, it was characterized by antifascist struggles, occupation of houses and the creation of athenaeums. Between 2012 and 2014 it championed general strikes against the (political) right that sought to unload the crisis on the workers.

There is a Popular Movement of Sabadell composed of dozens of collectives: of workers, of women, of the powerful Platform of those Affected by Mortgage, which joins some 500 people in assemblies, has four buildings occupied where they shelter the evicted and have a self-managed food bank. Besides, there are a dozen non-hierarchical consumer cooperatives and free media.

Months ago seven CDRs were born that propose, say the militants, to “territorialize the defense of the referendum” for independence. In the beginning the R was for Referendum, but later it was transmuted into Republic. In the first months up to 8,000 people participated in the assemblies, an astronomic number for a small population, which now fell to less than one thousand among the four or five CDRs that survive.

Throughout Catalonia, 300 CDRs emerged that fight for prisoners and exiles, in defense of the 150 accused because of street actions and of the 700 mayors threatened by Spanish justice. “The potentiality,” says a compañero that won’t give names or signs because the repression is real, “consists of the capacity to mobilize very different people.” He refers not only to the different political options (from anarchists to social democrats) but also age differences, where the elderly play a decisive role in the face of repression: the “yayos” and “yayas” are placed in the first row to dissuade/challenge the police.

“The limits,” he continues, “consist of the difficulty of maintaining this level of mobilization.” He assures that: “the process cycle is closed,” that the people are not afraid, that grassroots organization is very extensive and solid, but the independence process will be very long. “We have to chop rock,” he concludes between smiles.

In a meeting with four CDRs of various districts and neighborhoods, they assured that the movement “has no structures.” Each CDR is sovereign to make or take initiatives on their own, always under principles of non-violence, active resistance and rejection of hierarchies. One of the big problems is that traditional organizations of the independence movement are paralyzed by the repression; therefore the leadership corresponds to the territorial grassroots movement, whose experience goes back to the end of the 1990s in the struggle against globalization.

The CDRs carry out a very diverse set of actions: they place yellow ties on beaches and streets, cut off roads and lift up the barriers at toll booths, mobilize in support of feminists, pensioners, evictees and workers. “Each time that there is repression, more people join the assemblies,” says a young woman from Rubí, on the outskirts of Barcelona.

In the short term, they intend to maintain the resistance to show that there is no normality, that the country is intervened by the government of Mariano Rajoy. In parallel, they are taking steps to create “another economy,” based on the long experience of the Catalan libertarian co-operatives, which seeks disconnection from capitalism. They coincide in affirming that it is a struggle of a transversal character: for independence, against capitalism and patriarchy.

One of the more notable experiences is that of Coop57, the financial services cooperative that gives loans to social economy projects. Born in 1995 as a result of the struggle of the Editorial Bruguera workers, who created a solidarity fund with part of the compensation received (coop57.coop). Today they have 800 entities that support the project, with 4,000 members and almost 20 million euros in annual social loans.

I want to highlight three aspects of this movement.

One: let’s not be blinded by independence (for those that live far away and are not nationalists), because it’s most complex. The anti-capitalist and anti-patriarchal features are as powerful as the independence one.

Two: let’s not look to above (Puigdemont or Torra, for example) but rather below and to the left. That is where there is a source of very important teachings that should fill us with hope, with which we can dialogue and learn.

Three: the process will be very long and not everyone thinks like that. I have appreciated a tendency to believe that there will be independence without great conflict, something impossible in a reality framed by a centralist Spanish State that never broke ties with Francoism. But the prolongation of the process can strengthen the more anti-systemic options.

← Waffles and Zapatismo
Organized peoples of Chiapas against the extractive model →