Marichuy: If I don’t attain the candidacy, the struggle will continue 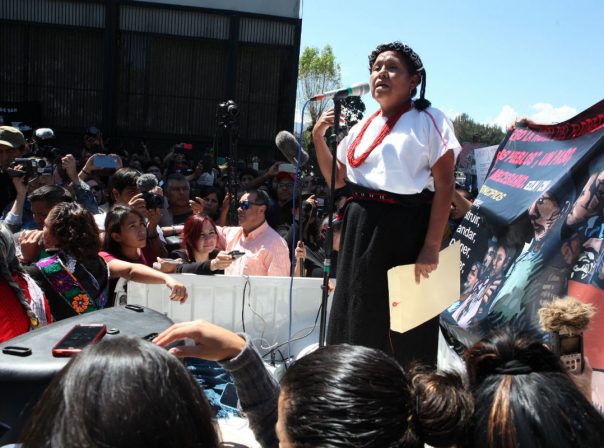 María de Jesús Patricio Martínez, Marichuy, who aspires to an independent candidacy to the Presidency, and five council women from different ethnicities on the Indigenous Government Council-National Indigenous Congress recognized that if at the end of the deadline the National Electoral Institute (INE, its initials in Spanish) established –which expires on Monday the 19th of this month– they don’t gather enough signatures for their candidate to appear on the electoral ballot, “the campaign around the proposal for reconstructing a Mexico with hope for those below will continue.”

Marichuy asserted that: “whether or not the signatures are completed, we have fulfilled our objective. Now we have a commitment. It’s up to us to decide, to think, to design a new country with our thoughts, our ways and adapted to the new times.”

In a public act that was organized around the tent on the esplanade of the Palace of Fine Arts to collect signatures in favor of the traditional Náhuatl doctor, the intellectuals Pablo González Casanova, Juan Villoro and Gilberto López y Rivas, who with dozens more made up the civil association The Time Has Come for the Flourishing of the Peoples, warned that the way in which the law is conceived for the inscription of independent candidates for this year’s elections, with a requirement of 800,000 digital signatures as a minimum for the presidential election, supposed a “discriminatory” design against millions of Indigenous that live in remote zones without access to cellular and Internet networks.

On “what’s relative” about this deadline, the writer Villoro quoted José Alfredo Jiménez, who in his popular song says that: “you don’t have to get there first, but you have to know how to get there.” And he said that this Marichuy campaign has essentially been different from all the others. “The other independent candidacies were a Plan B of the political class so that in essence nothing changes, whoever wins. Those candidates are like all the others. And the INE has not rejected signatures from us, as it has done to many others, because we don’t cheat.”

The Chontal Reyna Cruz, from the highlands of Oaxaca, alluded to this difference: “In this campaign we don’t give caps or bags of food, we give our word. And we don’t promise anything, we just share our injustices and suffering.” For example, those about their land, “where the rich take land away from us. They come and they don’t ask: what do you want to give us? They don’t even greet us and they take what they want. But now we know that, although we wear huaraches, we Indians are able to defend our rights.”

Lupita Vázquez Luna is one of the children that were not murdered in Acteal. From that massacre emerged the leadership of this young woman, who warned: “We are no longer willing to be humiliated, that they take from us what is ours, starting with our language.” Over the months spent in search of the vote for Marichuy, the roads traveled and the experiences heard, she concluded: “The Indigenous Government Council is not going to end. Quite the opposite! We have become very aware and the seed is already sown.”

← Waffles and Zapatismo
María de Jesús Patricio and the CIG: what was achieved →