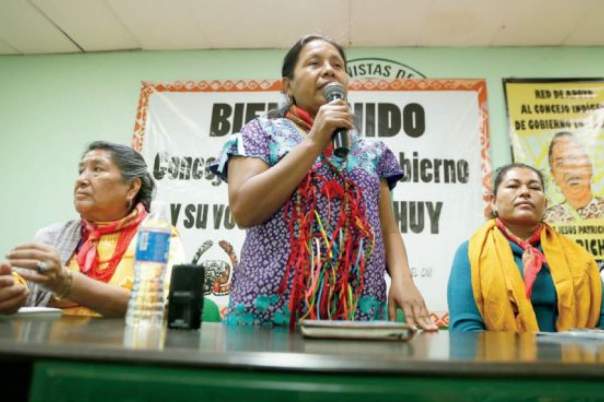 Marichuy on an organizing tour in Mexico.

The General Command of the Zapatista National Liberation Army (Ejército Zapatista de Liberación Nacional) issued a message last January 1; I will emphasize some aspects of it. It repeats and bases the call to organization from below, which has been its axis and conviction ever since the State “kicked over the board,” as they pointed out in 2001, after the failure to comply with the San Andrés Accords, which ruined the possibility of resuming the dialogue, suspended since September 1996. On the part of the Zapatistas, they have set the example, as they pointed out: “During these 24 years we have been constructing our autonomy, developing our different areas of work, consolidating our three levels of autonomous government, formalizing our own health and education systems, creating and strengthening collective work, and in all these autonomous spaces is where the participation of all the women, men, youths and children counts.” They refer to the Juntas de Buen Gobierno (Good Government Juntas), an emblematic experience that reaches beyond national borders, which was systemized and shared in the Escuelita Zapatista (Zapatista little school), which brought us together as students with a repeated call to get organized. The full evaluation of that effort, although not shared in its entirety, convinced them to seek other ways; that is inferred from the different seminars on the capitalist hydra, the two Comparte and Conciencia festivals, parallel to the complex activities of their own government spaces.

They also gave an account of the deepening deterioration in the country and of the virtual war against the peoples promoted from the State. Among other factors it was noted that: “they have provoked more contradictions and confrontations between communities and municipios, and they make sure that problems are not resolved in a good way, but rather by means of violence, which is why they continue to maintain, protect and equip paramilitary groups, because the bad governments want us to kill each other among brothers of the same people… Everything that’s happening shows that there is no longer government in our towns, municipalities, states and in our country.” They abounded in signaling what they have been realizing about the transmutation of the rulers into the historic figure of the overseers: “They are good defenders of the interests of their bosses to plunder the natural riches of our country and the world, like the land, forests, mountains, water, rivers, lakes, lagoons, air and mines that are guarded in the bosom of our Mother Earth, because the boss considers all of it merchandise and so they want to destroy us completely, in other words, kill off life and humanity.” The recent approval of the Homeland Security Law was referenced: “And yet they make us believe that it’s to combat organized crime, when in reality their idea is to keep us under control, quiet, divided, threatened, with more violence and impunity towards the peoples… We are not lying when we say that we have more than 500 years of exploitation, repression, contempt and dispossession.” In this context they reaffirmed their full support for the Indigenous Government Council, and once again they disclaimed that it’s about an electoral project, a question that continues without being understood: “They make fun of us a lot, that Compañera Marichuy doesn’t know how to govern, isn’t going to give us anything… Let’s organize so that Compañera Marichuy and the Indigenous Government Council can make their tour in the country, although she doesn’t get enough signatures to be a candidate. Because the signature is not the one that struggles, is not the one that is going to organize us… So go ahead, Compañera Marichuy, walk, jog, and when you may need run and stop and then continue, nothing else is left for us to do now.”

Aware that they are sailing against the current, they came out in front of what is starting to take shape in some sectors that attempt to evaluate this process only around whether or not registration is achieved: “Now is not the time for backing out, for getting discouraged or tiring, we must be firmer in our struggle, keep our words firm and follow the example that the compañeros and compañeras that have already died left us: not surrendering, not selling out and not giving up.”

Days before, Subcomandante Galeano, in the second edition of ConSciences, affirmed respect for the council members: “There are no luxuries for them, no private airplanes, no reporters from the pool assigned. Some say that they are collecting signatures so that the spokesperson Marichuy will be an independent candidate to the Presidency of the Republic. I don’t know if they are collecting signatures. They say they are collecting pains, rages, indignations, and that there is no cybernetic application for collecting that, or low, medium, or high-end cell phone that supports those terabytes. They only have their ears and their heart. Their word is invariably the same: ‘organization’, ‘resistance’, ‘rebellion.’”

Such are the axes of their struggle for life, that’s what it’s about, no more no less.

← Patriarchy, Mother Earth and feminisms
Join Us for Waffles & Zapatismo on January 27 →